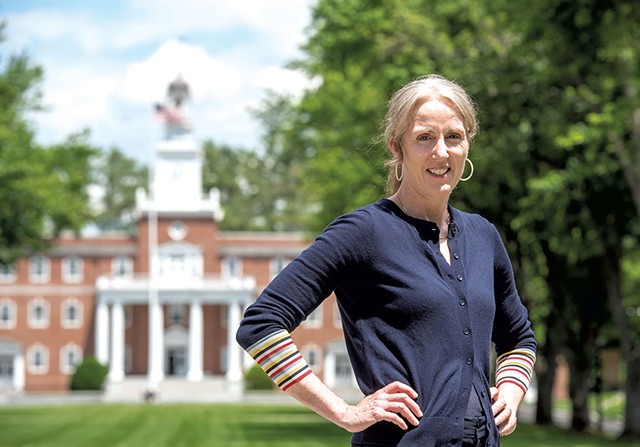 When Natalie Cartwright isn't teaching, she spends her time trying to predict who will live and who will die from firearm injuries. But she's not a physician, an epidemiologist or a criminologist — she's an associate professor of mathematics at Norwich University in Northfield.

Cartwright scours reams of publicly available data on thousands of patients who arrived at hospital emergency departments around the country with gunshot wounds over a five-year period. She looks for previously unrecognized patterns among those who survived their injuries — and those who succumbed.

Her indispensable tool in finding those patterns? Artificial intelligence.

Cartwright's aim is to build a computer model that more accurately predicts firearm mortalities. tweet this

In 2021, Cartwright received a $25,000 grant from the Vermont Biomedical Research Network for her project "Youth Firearm Violence: A Machine Learning Approach." A subset of AI, machine learning uses algorithms to recognize patterns within large data sets, then learns from those patterns how to make better decisions and predictions.

Cartwright's aim is to build a computer model that more accurately predicts firearm mortality than traditional statistical models can do. In the long term, such a model could be used to identify which factors weigh the most heavily in determining whether patients survive, she explained. Those factors might include the level of poverty where the shooting took place, the victim's proximity to a level III trauma center or a teen's exposure to gun violence prevention classes. Ultimately, such a model could help policy makers decide where to allocate their resources.

Researchers haven't yet proved that machine learning can teach us more about gun violence than we already know through conventional means, but the need for knowledge is urgent. As demonstrated by the latest round of mass shootings in Uvalde, Texas; Buffalo, N.Y.; and at least 250 other locations this year alone, the U.S. has an epidemic of gun violence that is difficult to predict and seems nearly impossible to stop. (For more on recent threats at Vermont schools, turn to page 14.)

In 2020, the U.S. experienced a record 45,222 gun deaths, a 14 percent increase over the previous year and a 43 percent increase over the previous decade, according to data from the U.S. Centers for Disease Control and Prevention. Yet, as Congress appears on the verge of a bipartisan agreement to enact the first significant gun safety legislation in decades, Americans remain frustrated by the lack of progress.

So Cartwright's research asks a pressing question: Can technology solve the problem of gun violence that our political leaders cannot?

"Everyone in the world is looking at this [issue] now," said David Hosmer, professor emeritus of biostatistics at the University of Massachusetts Amherst's School of Public Health and Health Sciences. Hosmer, who lives in Stowe, recruited Cartwright to take on the machine learning project.

A self-described statistical "traditionalist," Hosmer began studying firearm violence more than a decade ago after reading a news story about a child who shot his sister with his father's handgun after playing a video game with her. Knowing where his father kept the gun, Hosmer recalled, the boy pointed it at his sister and pulled the trigger, assuming she would come back to life the way characters did in the video game.

Thus began Hosmer's yearslong collaboration with Dr. Turner Osler, a now-retired trauma surgeon, statistician and professor emeritus at the University of Vermont Larner College of Medicine. Hosmer and Osler have coauthored numerous journal articles on gun violence, including one on firearm injuries among young children that appeared in the May 2019 issue of the American Surgeon.

For years, data of the kind they use were difficult to come by. In 1997, Congress stymied federally funded research into firearm injuries via the so-called Dickey Amendment, which prevented money allocated to the CDC for injury prevention from being used to "advocate or promote gun control."

But Osler, who treated scores of gunshot victims in his career, knew that every patient's reason for arriving at the emergency department is documented, including gunshot wounds. He and other researchers began mining hospital admissions records compiled by the Healthcare Cost and Utilization Project, the largest collection of hospital care data in the U.S. Cartwright is now using some of those data for her project.

When asked what machine learning can bring to our understanding of gun violence, Hosmer said it "looks at the data in a different way," finding relationships that might otherwise seem tangential or irrelevant.

The use of statistical analyses and computer modeling is nothing new to medicine and public health. For years, medical researchers have studied which therapies and interventions result in the best outcomes for patients, whether they arrived at an emergency department with a gunshot wound, a heart attack, a stroke or a traumatic brain injury.

But in recent years, researchers have been using AI to find previously unnoticed relationships and to make more accurate predictions of patient outcomes. As NPR's "On Point" reported last month in the first episode of its series "Smarter Health," some hospitals now use machine learning to predict diseases and conditions ranging from heart arrhythmias to skin cancer to domestic violence.

Steven Lin, a family medicine physician and head of the Stanford Healthcare AI Applied Research Team, explained in one episode how AI uses patients' own electronic health records to predict which ones will die within the next 12 months — with a high degree of accuracy. According to Lin, those predictions can ensure that patients have end-of-life plans in place, such as wills and advance medical directives.

By contrast, Cartwright's work at Norwich doesn't aim to predict which individuals will live or die from gunshot wounds or which medical interventions are most effective at saving lives. Rather, the model she's building pinpoints sociological factors most influential in firearm injuries. The data set she obtained from Osler, who is not involved in her project, includes more than 17,000 youths, ages 19 and under, who arrived at emergency departments in 40 states with a gunshot wound from 2010 to 2015.

While patients' identities are hidden, Cartwright knows the outcomes of those visits, as well as many other factors associated with each patient, including age, gender, the type of firearm involved, the severity of the injury, the zip code where the shooting took place and the median income there. She also knows whether the shooting was an attempted homicide or suicide, an accidental discharge, or the result of another incident, such as a terrorist attack or police shooting.

How does machine learning differ from more traditional statistical models? As Cartwright explained, with traditional modeling, researchers look at a specific factor, such as age, to see how it influences the outcome. With machine learning, researchers enter huge sets of data into the algorithm, which processes numerous variables simultaneously, matching them through countless computations.

"With machine learning," Cartwright said, "you put data into the machine, give it an algorithm and it spits something out. And you have no idea what it just did."

Cartwright has not yet published her findings. So far, she's discovered, among other things, that one of the most important factors in predicting mortality is the intent of the shooting; unsurprisingly, suicides showed a higher likelihood of death than other intentions.

Theoretically, such findings could be used to sway lawmakers who are on the fence about so-called "red flag" laws. These statutes, adopted by 19 states, including Vermont, and the District of Columbia, enable police, relatives and coworkers to petition a court to temporarily remove a firearm from someone who they believe is at high risk of harming themselves or others. While horrific mass shootings perpetrated with military-style weapons garner the most media attention, the majority of gun deaths in the U.S. are suicides, typically done using handguns.

In her preliminary findings, Cartwright's machine-learning model had an accuracy rate of 96 percent in its predictions, compared with a 93 percent accuracy rate using logistic regression, a more conventional statistical method. As she perfects her model and interprets how it arrives at its findings, Cartwright said, she'll move on to a new data set from 2016 to 2020 to see how well it performs.

Osler couldn't comment on Cartwright's research because he hasn't seen it yet. Generally, though, he said it's "an open question" whether AI brings anything new to the table on gun violence. While he acknowledges that AI is a transformative technology that's great at certain tasks, such as translating languages and doing facial recognition, "The question is, does it change the game in problems that are pretty well understood before you try to introduce AI?"

Cartwright concedes the shortcomings inherent in machine learning, such as inadvertent biases and gaps or omissions in the statistics she uses. As she put it, "The model is only as good as the data."

While no one expects AI to find a silver bullet that ends firearm violence, even a little more knowledge could go a long way.