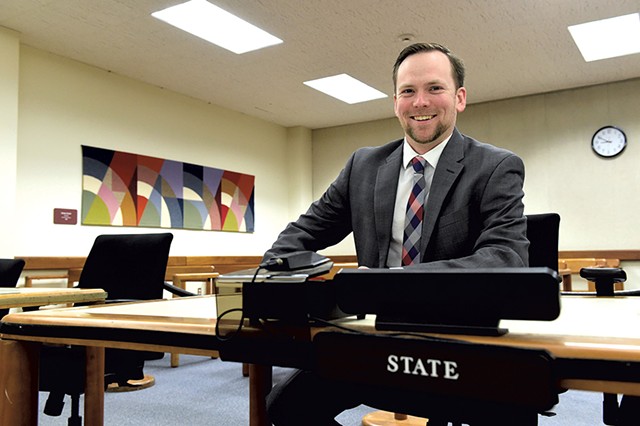 A dance instructor who molested two students might not be sentenced to prison. Ditto for a drug dealer whose customer overdosed and died. The families of the victims are outraged.

It's the job of newly installed Washington County State's Attorney Rory Thibault to sort out these cases and many others as he mops up after his predecessor, Scott Williams, who resigned in January.

Thibault, appointed by Gov. Phil Scott to fill out the 11 months remaining in Williams' term, has had his hands full. He discovered plea deals Williams had offered in pending cases that were, at times, so poorly documented and ideologically fraught that he launched a full review of every pending case. He scrapped dozens of deals in progress but said he felt bound to honor the controversial agreements made with the drug dealer and dance instructor.

A former military man, Thibault has sought to bring order to the chaos — even as he coped with an office staffing shortage that was part of Williams' legacy. And a major new case dropped onto his lap in January: He'll review the actions of police who fatally shot a suspected bank robber outside Montpelier High School.

"It's not only challenging, it's kind of unprecedented," said Judge Howard VanBenthuysen, who currently presides in Washington County. "I can't recall a similar set of circumstances. But Rory has risen to the occasion."

He had been scheduled to take the witness stand at the sentencing of Jody Herring, who in 2015 gunned down Department for Children and Families social worker Lara Sobel in Barre. Williams, who was a bystander, comforted a dying Sobel and was expected to answer questions about his actions that day.

Seven Days revealed prior to the hearing that Williams had not actually disarmed Herring, as had been widely reported.

Williams never testified. Instead, he dropped from public view and sought care at the Brattleboro Retreat, which provides mental health and addiction treatment. Williams went on paid family medical leave, and the Vermont Supreme Court suspended his law license.

Williams knew at the time that state regulators were looking into a "community fund" he controlled, meant to support criminal justice reform initiatives. In at least a few instances, defendants he prosecuted paid money toward the fund, potentially creating a conflict of interest for Williams.

He resigned in January, citing post-traumatic stress disorder from the Sobel shooting. The governor turned to Thibault, who had previously served as a deputy prosecutor in the State's Attorney's Office, to lead it for the rest of the year.

The job carries huge responsibilities. State's attorneys have total control over the filing of criminal charges in their jurisdictions. And they sign off on plea agreements, which resolve most criminal cases.

Thibault said he found problem after problem in pending cases. Williams, he said, kept few records and made plea agreements in a seemingly haphazard manner. Some of his deals were inconsistent with how his deputies — and even Williams himself — handled similar cases, Thibault said.

"In certain situations Scott was more lenient, but it came at a cost of inconsistency in outcomes," Thibault said.

One fraught plea agreement involves Martin Berno of Duxbury. In January 2017, Williams charged Berno with a felony count of dealing drugs with death resulting, which comes with a two- to 20-year sentence. Berno sold heroin and prescription drugs to a Wisconsin man, Kyle Bates, who fatally overdosed.

Members of Bates' family told Williams they hoped Berno would serve at least two years in prison. Williams, according to court records, assured the family in May 2017 that Berno was "looking at two to 10 years."

In August 2017, Williams struck a plea deal. Berno pleaded guilty to a felony charge of dealing heroin in exchange for a five-year deferred sentence. Williams never told the Bates family that he'd finalized a deal calling for no prison time, a common courtesy in most cases.

"Rory has risen to the occasion." Judge Howard VanBenthuysen tweet this

Thibault said he has stuck by the agreement because Williams, Berno and a judge had already signed off.

Bates' father, Donald, said the family understands Thibault's decision, but family members plan to ask a judge to throw out the deal during an April 20 sentencing hearing.

"We feel that we were revictimized by Scott Williams and with the plea deal that he made without our knowledge," Donald said. "If the defendant hadn't provided those drugs to my son, my son wouldn't be dead."

Similar problems plagued the case of former dance instructor Ernest Phillips, who was arrested last year and charged with six felonies for allegedly having sex with students, ages 15 and 17 at the time, at Green Mountain Performing Arts in Waterbury.

Williams reached an agreement that would not include prison time and again didn't notify the victims. In a document filed with the court, a victim's advocate expressed anger with the deal and Williams' conduct.

The case is on hold while lawyers appeal some pretrial rulings to the Vermont Supreme Court. As in the Bates case, Thibault is sticking to the agreement his predecessor made.

Thibault declined to comment on the ongoing Berno and Phillips cases.

Fortunately for Thibault, he's experienced in dealing with chaotic situations. Before moving to Vermont, he served in the Judge Advocate General's Corps of the U.S. Army and made legal decisions about special forces missions in the Middle East.

He said his military training served him well when he took charge in Barre.

"It was all hands on deck," Thibault said. "The first goal was stability. We needed to restore public confidence in the community in our office."

"He's always been good at crisis management, but the military honed that skill for him," his wife, Johanna, said.

Thibault grew up in a working-class home in Connecticut but spent many summer days at his grandparents' camp in Brookline, where he came to appreciate Vermont's beauty. He later returned to the Green Mountain State to attend Vermont Law School.

He met his future wife when they both joined a student rugby team there.

"He was just really interesting," Johanna said. "For someone who hadn't traveled much, he was very worldly — he read encyclopedias. He was kind of a really cool nerd, if that makes sense, and I just felt a connection to him."

They married in 2006 and graduated in 2007. Thibault had military obligations because the Army had put him through his undergraduate studies at the University of Richmond. So the couple set off on a nomadic life for close to a decade, moving from base to base: Kentucky; Virginia; Washington, D.C.; Germany. As a JAG officer, Thibault worked as both a prosecutor and defense attorney. Eventually, he supervised 10 other lawyers.

In 2015, he spent six months in Turkey and Jordan as part of Combined Joint Task Force — Operation Inherent Resolve, joining the fight against ISIS in Iraq and Syria. While declining to delve into details, Thibault said his work focused partly on "legal authority for certain operations, and assessing and advising on rules of engagement." Special forces battling ISIS in that conflict have navigated complex rules of engagement, including the use of drone strikes.

By the end of the assignment, Thibault had risen to the rank of major. He wanted his sons, now 8 and 4, to have a steady home life, and for Johanna, a lawyer, to have stable job opportunities.

Throughout Thibault's military career, his family had maintained Vermont residency status. Thibault looked for a job in the state, and in June 2016, Williams hired him. The family bought a house in Cabot.

Thibault and his wife found themselves making frequent trips to Harry's Hardware store in their new hometown. They got to know the owners and, before long, became 50/50 investors. They have helped reimagine the place as a combination hardware store, bar and live music venue.

Thibault pulls shifts there, sits on the Cabot School Board and remains in the U.S. Army Reserve.

Even as he put down roots in Vermont, Thibault lasted little more than one year in his new job and moved on to work as a prosecutor in the Attorney General's Office.

Thibault acknowledged that he left because of a strained relationship with Williams. While declining to provide specifics, Thibault said he was concerned about Williams' handling of his staff and what Thibault said was an often haphazard, sloppy manner of overseeing criminal prosecutions.

"I had some significant concerns about the director of the office, and, as the chief deputy, I found it difficult to reconcile my views with that direction," Thibault said.

Williams did not respond to a request for comment.

Before long, Thibault, a Democrat, will have to turn his attention to campaigning for the November election. He hopes to make a mark as a criminal justice reformer. Thibault said he would seek sentences that emphasize treatment and restorative justice.

"A lot of crime is driven by economic situations and poverty and substance abuse," Thibault said. "Unless you're doing something meaningful with this process to address the drivers of crime, we can't have confidence we're going to meaningfully reduce crime."

While that rhetoric is in vogue in many criminal justice circles, it comes with some political risk. Washington County is one of the few places in Vermont with a tradition of closely fought state's attorney's races.

Thibault seems at ease with the political aspects of his job and doesn't shy away from suggestions that, one day, he could seek higher office.

"Is being a state's attorney it for him? I seriously doubt it," Johanna said. "I'm sure you can hear it in his voice."