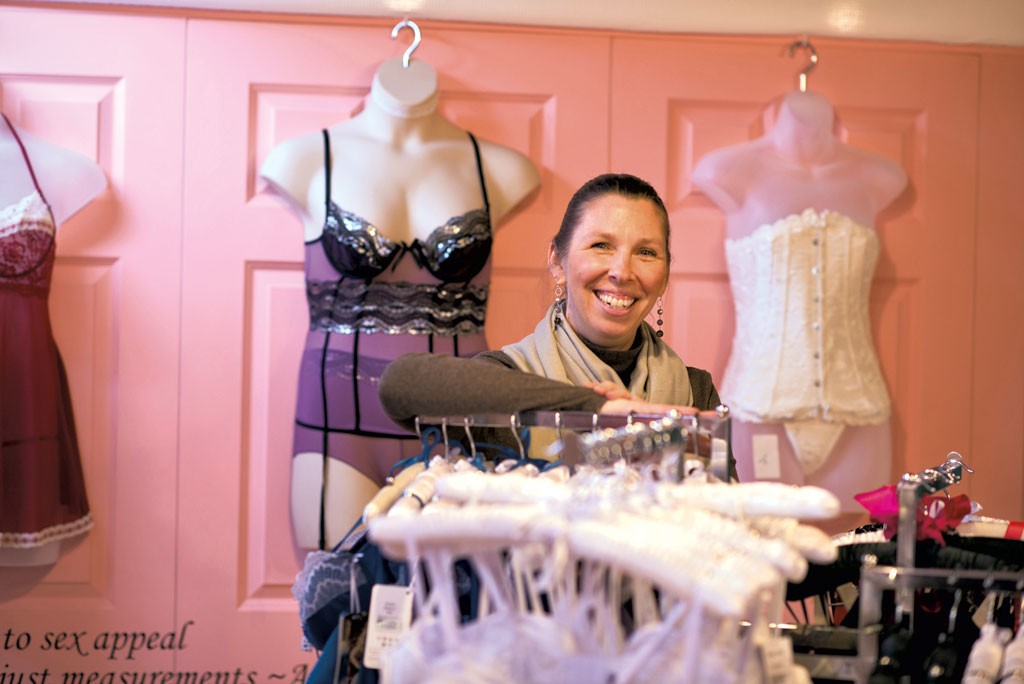 Plenty of things come to mind when one thinks of Middlebury, but vibrators, cock rings and salted-caramel lube probably aren't among the first ones. The picturesque shire town of Addison County has long drawn crowds for leaf peeping, skiing, craft brews and college visits. Now, though, visitors craving a less vanilla thrill can find one — or several — behind a discreet storefront at 52 Main Street.

That's where Curve Appeal, an intimate apparel and pleasure boutique oriented mostly toward a female clientele, opened its doors last July. Owner Kristin Lawson, 44, has been a self-employed "sexologist" in the Champlain Valley for the past 10 years. Her goal? "I want people to feel like orgasms are their birthright," Lawson says.

But toys, she advises, are only one means to enhance one's pleasure. For newcomers, Lawson recommends gradually introducing products into the bedroom, starting with accessories such as lubrication gel, or with a sexy nightie.

"Sometimes it's simple stuff," she says. "I'll give a customer a hot massager and put some oil on it and say, 'Give this to him.' Then someone who's never had foreplay — they just had the, like, kiss, twist the nipples, shove it in and out thing — is having foreplay for the first time in their lives. And suddenly they're like, 'All right! Game on!'"

Tucked below street level, adjacent to a tattoo parlor and an artisanal chocolate shop, Curve Appeal has a vibe that suggests a college-town boutique far more than Fifty Shades of Grey. The walls are painted a friendly pink, and rooms are adorned with twinkly lights and potted plants. The first things customers see upon entering are attractively arranged displays of nighties and bras, with an emphasis on plus-size options.

When Curve Appeal opened, Lawson's vision was to specialize in lingerie and sexy getups for plus-size women, she says. She knew there was a local need for such offerings; for the past decade, she's made her living hosting "toy parties" for private groups. (Think Mary Kay parties, but with dildos instead of eye shadow.) At gatherings such as bachelorette parties, Lawson would show up with a trunk full of toys and give fun, educational demonstrations on using the products to enhance pleasure. One of the most frequent complaints she heard from clients, she says, was the difficulty of finding pretty bedroom getups in larger sizes.

Over the years, Lawson built a client base of more than 5,200 people in Addison, Rutland and Chittenden counties, as well as in upstate New York. But when she opened Curve Appeal, she didn't initially plan to stock it with toys like those she'd showcased at her parties. "I didn't know how the town would react," she explains.

Last September, customer demand inspired Lawson to take the plunge. She filled the shop's back room with a range of toys that are "body safe" (read: free of the toxic chemicals often found in cheaper plastics). The front room is still stocked with lingerie, bras, perfumes with synthetic pheromones and plumping lip gloss. If not for a sign that reads enticingly, "And Things That Buzz in the Night...," a shopper might miss the sex-toy part of the store entirely.

Of course, word spreads fast in a small town. While most of the feedback has been positive from locals, says Lawson, as well from the Middlebury College set, she has experienced some backlash from naysayers who are uncomfortable with her offerings. Lawson estimates that about a dozen people have stopped in to tell her off. But she good-naturedly shrugs it away, saying, "Anyone has to have kind of a thick skin if they're going to sell orgasms for a living and talk about sex and bodies."

Not surprisingly, sales from Curve Appeal's back room have outpaced those in the apparel section. "I think that's going to be a trend," Lawson deadpans.

"That makes me super happy," she adds more seriously, "because I love lingerie, and I love that women will feel pretty and that will get them in the mood — but this is my passion."

The back room's shelves may be stocked with phallic objects, but the space feels anything but tawdry. In part, that's because Lawson refuses to buy anything with explicit or pornographic packaging.

Lawson believes hers is the only sex-toy store in the state that doesn't also stock smoking paraphernalia. "I'm just wanting to stock solid products for strengthening relationships and empowering women," she says. "I want them to be able to come in and not be frightened by a counter full of bongs and hookahs."

Instead, customers find Lawson herself at the counter. Tall and lanky, the mom of three has an effusive, approachable demeanor that makes her seem more like a grown-up version of your high school BFF than a salesclerk. In other words, she's exactly the kind of gal with whom you'd want to discuss bullets versus rabbits. And if you don't know what those are, you may need to pay a visit.

"What I hear from people all the time is, 'You make it so comfortable; you just make it sound so normal,'" Lawson says. "Like buying kitchenware — only, you know, for my vag."

The original print version of this article was headlined "All Abuzz"