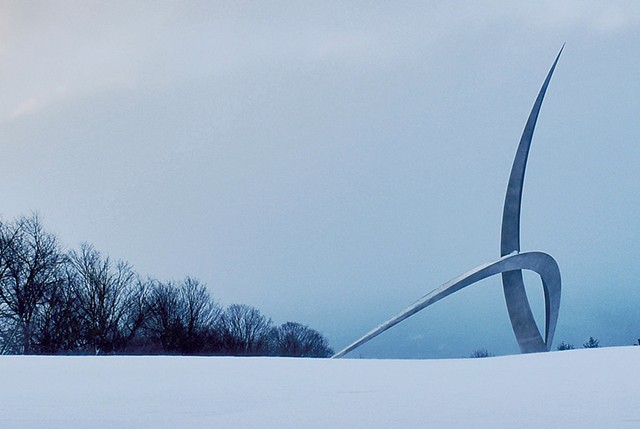 Stowe artist Christopher Curtis is best known for the hundreds of sculptures he's carved from boulders for nearly half a century. Unearthed from Vermont fields, they're impressive for heft alone. But what intrigues Curtis most, he says, are the myriad characteristics of stone created over unfathomable millions of years. In many of his works, the artist pairs geology with geometry, cutting a circular or rectilinear portal right through the rock. The word "timeless" applies even in a contemporary design.

Metal is another story, both historically and materially. And for Curtis it's also a newer one — that is, using stainless steel not just as a sculptural base but for the entire artwork. The latest case in point: "That Place in the Stars," currently but briefly installed at the Trapp Family Lodge in Stowe.

The elegant abstract sculpture consists of a spire swooping 24 feet high and a horizontally bisecting arch, 21 feet wide, that tucks slightly around the vertical piece. Though somewhat suggestive of a bow and arrow, "That Place" eludes literal interpretation. Rather, viewers might find that the work's dynamic contours and skyward thrust evoke hope or optimism — or perhaps an exit from this troubled planet. The work's title certainly implies a constellational aspiration.

Curtis offers another consideration of the sculpture. "Part of the subtlety of the design is the triangular basis [of the forms]," he says. "The twists and curves add some sexiness to it." Indeed, none of the surfaces is flat; this streamlined work is somehow voluptuous.

However anthropomorphized, the gracefulness of Curtis' latest piece demonstrates metal's capacity to assume any shape an artist can imagine and design — in this case, computer-aided. Though it actually weighs about 2,700 pounds, the sculpture appears paradoxically light, maybe even aerodynamic.

As it happens, "That Place in the Stars" doesn't just look ready for takeoff; it's about to embark on a journey to a site halfway across the U.S. The sculpture's final destination is the garden of a collector in Tulsa, Okla., who commissioned it. Along the way, Curtis will assemble and display the work in several other venues for a few days each: PrattMWP College of Art and Design in Utica, N.Y.; the Public Market in Rochester, N.Y.; the Wade Oval in Cleveland, Ohio; and the Philbrook Museum of Art in Tulsa.

Handily, the two pieces of "That Place" come apart for transport. Just as importantly, Curtis invented a rack specifically for this sculpture that will safely hold it on a flatbed trailer without marring its softly burnished finish. He also has devised a system for assembling, taking apart and loading the piece by himself. A remote control is involved, Curtis reveals — yet another tool he's adopted in his evolving life as an artist.

"You have to keep spending more money on yourself," he says. "All those tools enable experimentation and play, and eventually design and execution. You can only do it if you have the tools."

When Curtis returns from Oklahoma in May, he'll begin to prepare for another significant journey three months later: cleaning out a studio in which he's worked for 40 years. "I'll have a 'weird stuff' sale," he promises.

The studio, which holds many a stone and tool, is in the back of the former West Branch Gallery & Sculpture Park off the Mountain Road. Curtis operated it for 20 years with his wife, artist Tari Swenson, before selling to an out-of-state owner. When the gallery closed for good in 2019, adjacent business Stowe Cider took over the space. Curtis says his five-year lease on the studio is now coming to an end and he'll relocate to a workspace in Barre.

"The new studio is not conducive to large stone," says the artist, who is 70. "But the reality is, I'm not getting any younger. I don't mind jobbing out the hard work — for example, with DMS [Machining & Fabrication]," which manufactured "That Place." "Generally speaking, I'm looking for more gentle ways to accomplish things."

Regardless of medium, Curtis observes that any artist just wants their work to be seen. He sums up his cross-country tour like this: "Long ago my mother, who was influential in my art development, would ask me what I was going to do to contribute to the well-being of the world ... I thought the best contribution I could make would be to the aesthetic of the world."

"That Place in the Stars" is on view through April 15 at Trapp Family Lodge in Stowe and at christophercurtis.com.