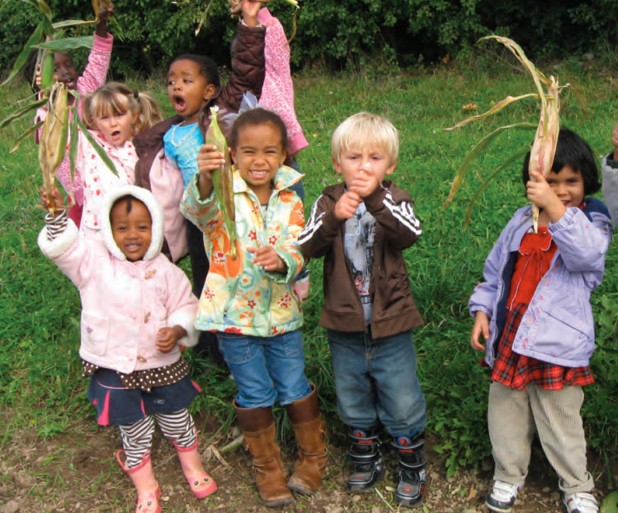 In farm-to-table-obsessed Vermont, school chefs cooking up delicious meals with local greens and cheeses may seem like old hat. Yet that approach is seen as so novel in other parts of the country that our Farm to School programs have gained national attention.

The state’s school and child-nutrition corps, chefs included‚ has decided to distill some of that know-how into a book, New School Cuisine: Nutritional and Seasonal Recipes for School Cooks by School Cooks. It will be sent to every school in Vermont and every child-nutrition program in each state in coming months.

“The cookbook tries to show how Vermont farms play an integral role in school lunches, as well as the relationship that school food personnel have with their school communities,” says Abbie Nelson, the education coordinator and director of Vermont Food Education Every Day (VT FEED), one of the book’s partners. (Other partners and sponsors include the USDA initiative Team Nutrition, the Vermont Agency of Education and the School Nutrition Association of Vermont.) “We’re really trying to get at those relationships and show that school food cuisine is no longer ‘slap the food on the tray,’” Nelson continues. “It has a lot more to do with re-education and connections.”

Fifteen school chefs from around the state contributed recipes and time, as did New England Culinary Institute students who helped test recipes for such dishes as Blueberry Soup, Roasted Parsnip Chips, Carrot & Quinoa Muffins, Cheesy Kale Bake and Chicken Tikka Masala. All the recipes in the book are based on the USDA dietary guidelines, all are presented in portions of 50 servings or more, and many are enlivened with colorful photographs. An introductory chapter outlines a method for rolling out the new cuisine at school, with tips such as “Start small” and “Teach students that tastes change.”

“You will find ingredients such as beets, arugula and kale in these recipes, as surprising as they may seem in a school meals cookbook,” reads the book’s intro. “These ingredients represent the transformation in our thinking about what foods are appropriate for children. In this cookbook, all food is appropriate for children. It is the preparation and presentation of the food that will ultimately make it ‘kid-friendly.’”

The book — which has been available in electronic format since November — will have its official launch this week at a dinner prepared by NECI chef Martha Franklin and her students.