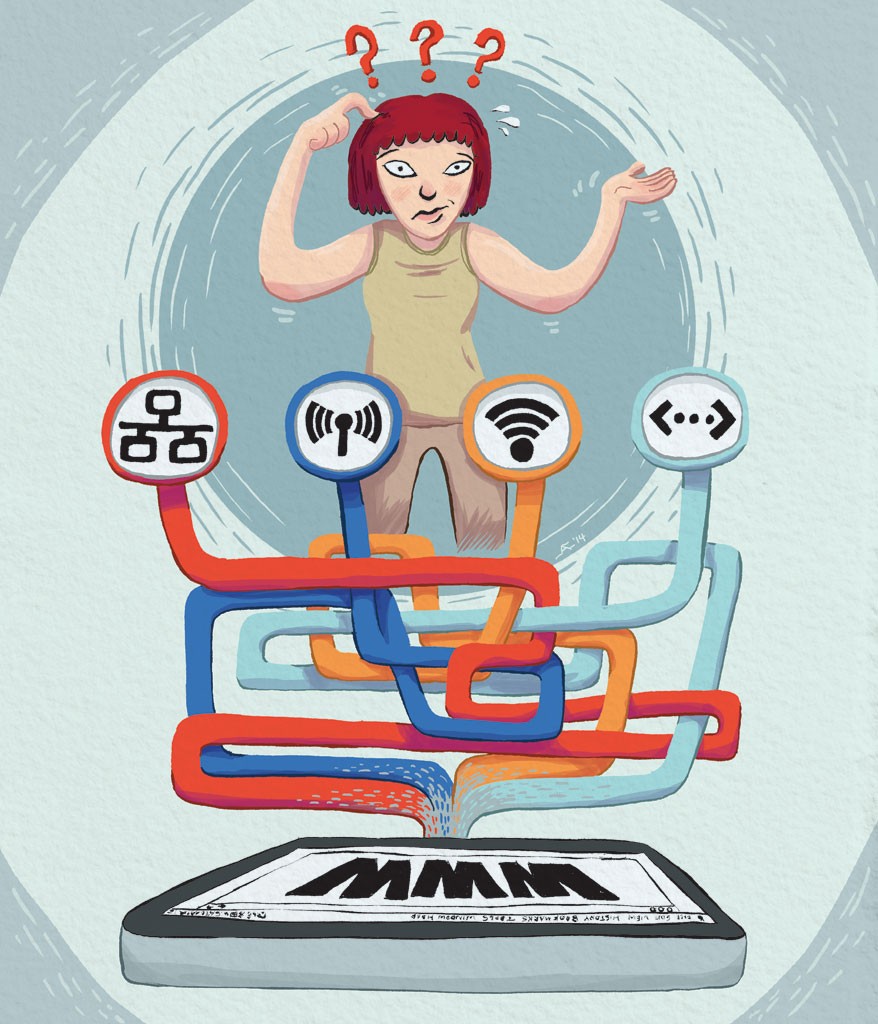 Apartment hunting is hell in Burlington, I've heard. But for me it was mercifully easy: A few weeks into my search, a coworker tipped me off about an affordable condo with an expansive view of the lake. Choosing an internet service provider turned out to be the tortuous part.

Before I go on, let me get this off my chest: I didn't choose Burlington Telecom (BT). I stuck with out-of-state-based FairPoint Communications for the same reason I don't buy fair-trade chocolate: I'm 26, and I feel entitled to be cheap.

I could have stomached BT's $65 installation fee, but the idea of paying $5 every month for a modem irked me. Keep it for five years, and that's $300 — for a plastic box.

I do feel guilty for turning the cold shoulder to the little local company. BT, on top of having to compete for customers with the telecom titans, must also contend with the aftereffects of its troubled past. It was revenue starved and on the brink of financial collapse when the Bob Kiss administration improperly diverted nearly $17 million of taxpayer money to keep it afloat. Citibank subsequently sued the city for failing to repay $33.5 million in loans used to build the network.

The recent settlement between the City of Burlington and Citibank removes the threat that the latter will uproot the entire fiber-optic network, but BT's future remains uncertain. Mayor Miro Weinberger has said the city intends to sell the company, but who knows who will buy it? And it remains to be seen whether a local company can survive in a monopoly-prone industry where Comcast is king.

I began my search by polling friends and coworkers about their provider preferences. Other than a few people who recommended BT "because it's local," no one seemed to have strong feelings.

Googling "best internet provider in Burlington" wasn't much help. The top search result was a University of Vermont student guide that listed several other companies, including Sovernet Communications and Green Mountain Access — but it was seven years old. How could I trust a site that directed students to a Wikipedia article on dial-up access?

After the fact, I made a phone call to Vermont's public service department and learned that there are 36 broadband providers in the state, six of which service my address in Burlington. In addition to BT, FairPoint and Comcast, I apparently could have chosen from Sovernet, AT&T, Sprint and Verizon Wireless. Broadbandvt.org, a website developed by the state, the University of Vermont and several other entities, gives consumers a list of providers based on the census area where they live. But a month ago, I was letting word of mouth guide me, and I assumed there were only three.

I knew Comcast hadn't fallen by the wayside, so I started there. I've heard stories about Comcast papering neighborhoods with fliers and going door to door to lure customers away from BT. But for a company that so aggressively peddles its wares, it offered an infuriatingly opaque website.

I wanted fast internet — no cable, no phone — at the cheapest price possible, but comparing rates online proved impossible. That's because neither Comcast nor FairPoint publishes prices on its website. And both have coverage maps too simplistic to be of much use. Here they are, gatekeepers to the internet — a creation premised on the open exchange of information — and they both have content-free websites.

Instead, for information about rates, Comcast directed me to its online chat room, where an "analyst" named Nongthombam immediately tried to sign me up for an $80-per-month package. He had a weaselly role to play, but Nongthombam himself was exceedingly pleasant. He was reasonable, too, when I pointed out how deceptive Comcast's pricing structure was — the only affordable deals get twice as expensive one year in.

Me: Thanks for your help. I'm not interested at this time because currently I pay $38.99 for seven megabytes per second with FairPoint, which seems to me like a better deal.

Nongthombam: I understand you; however, I am offering you the performance packages at $29.99 a month for the first 12 months with 25 megabytes.

Nongthombam: Yes, I see that.

I haven't chatted online with a stranger since middle school, and, as mundane as our conversation was, it evoked the same giddiness I felt then. But when it became clear I wasn't interested in what Nongthombam was selling, he exited the chat room promptly, leaving me staring at the sentence I'd started typing ("Where do you live?") and feeling pathetic.

To its credit, BT does publish its rates online. It even lists all the additional charges you might have to pay, although I still had to call to ask what the "Snowbird" fee is. (It's a $15-a-month charge that people who leave Burlington during the winter pay, instead of terminating their service and then paying another installation fee when they sign up again.)

BT's cheapest deal is $39 per month, which lets you download and upload at a speed of five mbps. Because the company uses a fiber-optic network, that speed is guaranteed. Other high-speed services are more fickle: FairPoint uses DSL, and the speed depends on how far you are from the provider's central office. Comcast uses its cable connection, which can get bogged down when too many people are signed on.

At my old apartment in Montpelier, FairPoint charged me $38.99 a month for a download speed of "up to seven" megabytes per second. The upload speed was a paltry 768 kilobytes per second, but I never had a problem with it. When I called, a FairPoint rep said the company would transfer my service without any additional charges — no installation fee, no monthly modem fee.

It seemed liked the simplest route at the time.

The sunsets over Lake Champlain are stunning from my new apartment; I watched my first one while on the phone with a FairPoint customer-service rep, turning my modem on and off, glancing back and forth between the blinking green light — a bad sign — and the receding sun.

No luck. But the next day, I got the call I had been waiting for: Dan, a FairPoint technician, was on his way to help. Except he had instructions to help "Marla on College Street." I 'fessed up to not being Marla and tried to sweet-talk him into coming to my condo instead. Dan declined — policy prohibited it — but he was perplexed by the mix-up and said he'd get to the bottom of it.

True to his word, Dan called back a few hours later. Marla, it turned out, was vacationing in California and probably couldn't care less whether her internet was working. Dan had unearthed my ticket from the office basement (don't ask; I didn't), but he would still have to go through the central office to get permission to help me.

A day later, Dan showed up and fixed the phone line — for now. I'm fuzzy on the particulars, but the line's days are apparently numbered. I had to wade through FairPoint's Terms of Service agreement to determine that I'm on the hook if it stops working.

Had I opted for BT, cutting-edge, hair-thin cable made of pure glass would have delivered internet to my door. As nice as Dan was, I wouldn't have had to wait for someone in North Carolina to authorize his visit.

Stinginess steered me away from BT, though, and now I'm locked into another contract with FairPoint, entrusting my internet connection to a frayed telephone line. When the contract expires next March, I'll be one year older — perhaps a little less miserly and ready, at last, to go local.

The original print version of this article was headlined "Making Connections"