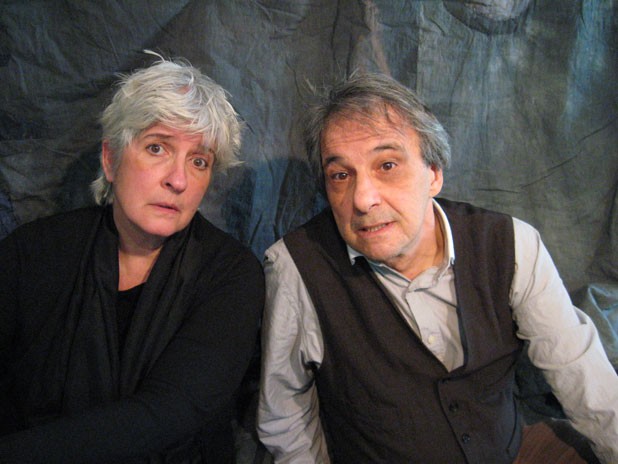 Real crime is no laughing matter, especially a vicious homicide. Yet the audience for Mildred Taken Crazy - a short play based on a notorious late-19th-century murder in Montpelier - can expect some humor at its performance in Burlington next week. Bellows Falls-based actors/playwrights Steve Friedman and Denny Partridge like to say: "Our plays are always funny, no matter how serious."

Friedman and Partridge, partners in life as well as in theater, have been performing together since 1970. Both are veterans of the San Francisco Mime Troupe and Modern Times Theater of New York City and have staged original and classic works on several continents, won numerous awards, and taught theater at several colleges. Their last academic tenure was at Barnard College, from which they took early retirement and relocated to Vermont two years ago. But the couple has had a much longer relationship with the state - for Partridge, since the age of 8. She has family here, including sister-in-law Rep. Carolyn Partridge (D-Windham). Daughter Rose Cheney Friedman worked with Bread and Puppet Theater - and was married at its Glover headquarters last year.

To sum up two such rich and fascinating careers in such a small space seems almost criminal, but better bios of Friedman and Partridge are available on their website, www.mudtimetheater.com. That address hints that the pair has not retired from the stage - and that they know from mud season. Friedman and Partridge founded Mud Time Theater in 2007 "to create plays of particular interest to year-round Vermonters," according to the site. Or, as Friedman puts it, "not hotsy-totsy New York theater, but something relevant to Vermont."

Enter Mildred Taken Crazy, which the couple developed because "passion makes theater worth watching," says Friedman. The 1897 crime at its center involves a young woman killing another woman over a man who was engaged to both of them. (Why the two women did not kill the two-timing man instead remains a mystery.) In any event, the murder was a sensation throughout the eastern U.S., according to these playwrights (who learned about it from a poster belonging to a friend in New York). Such an act was unheard of at the time, especially committed by a woman - and in low-crime Vermont. Mildred Brewster was sent to the "asylum" in Waterbury and then disappeared from the historical record. Until now.

With the zeal of doctoral students, Friedman and Partridge have researched the case extensively, poring over crumbling newspaper microfilm in Vermont, and engaging librarians as far away as Baton Rouge in the hunt. For a long time, Mildred's fate was "stuck at age 30." Then they found more. "The piece keeps evolving," says Partridge. "We work on it all the time."

What remains constant is the bare-bones presentation of the material, which combines "song, drama and storytelling to help the audience feel and think its way through a moment of violence with far-reaching consequences." This with two actors and only a single chair for a "set." That portability serves Mud Time's mission of bringing theater anywhere - from stages to living rooms, schools to prisons. Friedman and Partridge have played in all those places and more, even the Statehouse on Farmers' Night. "We're looking to break the boundaries of where theater could be performed," Partridge says. "It's intended to show it's possible to do theater with almost nothing," Friedman adds.

Next week, they'll bring Mildred Taken Crazy to the Outer Space Café in Burlington's Flynndog building. Though the performance is free, the café is serving a gourmet meal just prior - making it almost dinner theater. Friedman and Partridge's connection in Burlington is former student Emily Anderson, of VSA Arts of Vermont and the Awareness Theater Company. "We don't have a publicity machine here," notes Friedman. "What we need to find everywhere [in Vermont] is a person who's interested in making it happen."

Chances are the Mud Time two won't have much trouble finding more venues for Mildred. After all, "Everyone is interested in love," Friedman points out. The play "is about a woman who's trying to remake her life. We're all always trying to remake our lives."

Mildred Taken Crazy, presented by Mud Time Theater, will be performed Wednesday, May 14, at the Outer Space Café, 208 Flynn Avenue (Flynndog), Burlington, 8 p.m. Dinner, at 7 p.m., is $13. No reservations. For more info, visit www.mudtimetheater.com or www.flynndog.net.