A New Graphic Novel Considers: What If Houdini Were a Spy?

What if Harry Houdini were not just the world's greatest magician but a master of actual magic? What if he used his supernatural powers to spy for the U.S. government, fighting those who would wield magic to evil ends? That's the enticing premise of After Houdini, the latest graphic novel scripted by Jeremy Holt of Middlebury, whose dark rock-music fable Skip to the End came out earlier this year.

Illustrated in a punchy, larger-than-life style by Arkansas-based John Lucas, the tale begins in 1918, eight years before the death of the real Houdini on Halloween 1926. The protagonist is not Harry but his fictional son, Josef, whose parents have given him up for his own protection. Josef finds use for his inherited escape talents in a life of petty crime. But he goes straight when former president Theodore Roosevelt Jr. sweeps in and recruits him for the mission of a lifetime: to rescue his long-lost dad from Butyrskaya Prison in imperial Russia. 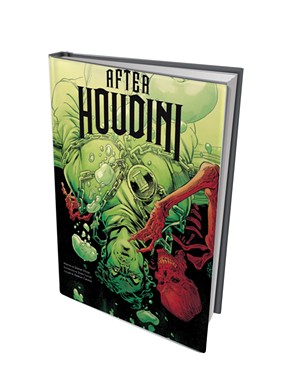 In an afterword, Holt describes the popular 2007 book The Secret Life of Houdini: The Making of America's First Superhero, by William Kalush and Larry Sloman, as his "primary inspiration." While that book did advance a theory that Houdini was a spy, it was based on historical sources. After Houdini takes those facts and runs with them, depicting Houdini as having literal superpowers and playing fast and loose with history in the fun, splashy ways that only comics can. Among its dramatis personae are president Woodrow Wilson, Grigori Rasputin, Sir Arthur Conan Doyle and clairvoyant Edgar Cayce. Celebrity spiritualist Mina "Margery" Crandon, Houdini's nemesis in real life, here becomes a sexy sorceress exploiting the power of "dark matter."

While Josef Houdini isn't much given to introspection — he only gets four panels in which to contemplate his yearning for a real family — the atmospheric, action-packed story is sure to appeal to young comics fans. They may find themselves going down the fascinating wormholes of Houdini history to find out just how much of the tale was inspired by facts.

Outlandish as After Houdini might be, so were the feats of the real-life magician. Holt and Lucas capture the breathless excitement of seeing someone accomplish the seemingly impossible. The book's back matter includes a detailed description of its genesis, augmented by a gallery to show us how the images evolved. And will continue to evolve, since a sequel titled Before Houdini is due out next spring.

The original print version of this article was headlined "Quick Lit: Great Escape"