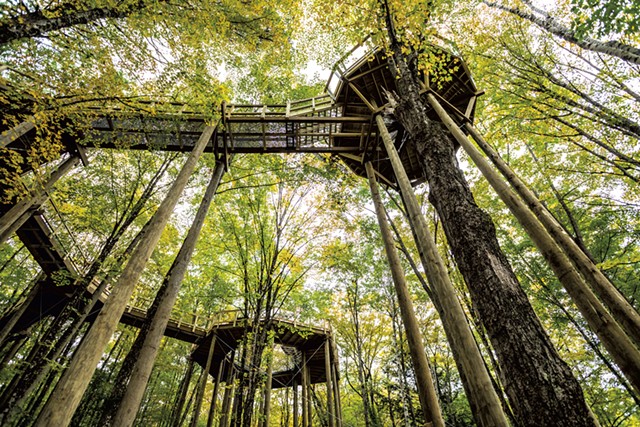 How often are humans able to gaze, up close and personal, at the crown of a 90-foot tree? Zip-line adventurers might, and scientists sometimes climb up high for research. But normally we bipeds are earthbound, more inclined to appreciate the shade of a locust, collect sap from a maple or swing from an oak branch.

Now, the Vermont Institute of Natural Science in Quechee allows us to stand eye to leaf with tree canopies. Visitors can climb an elaborate 100-foot structure patterned after a fire tower — dubbed the "tree house" — at the nonprofit's newly completed Forest Canopy Walk. Up there, the treetops are within reach, and the view of the Ottauquechee River and distant hills is breathtaking.

But that's not all. Some 50 feet above the forest floor, more than 900 feet of walkway loops from the tree house to three more human-made structures: a giant owl's nest, a spiderweb (20 feet in diameter) and a large eagle's nest. The walk, which opens to the public on October 12, invites visitors to relate to the forest in new ways.

"We are creating something for the general public to experience — to learn about the forest and the forest ecosystem, the plants and animals that depend upon it, and how important it is environmentally to humans," VINS executive director Charlie Rattigan said.

Open year-round, VINS is dedicated to environmental education, research and avian rehabilitation. Its 47-acre campus has classrooms, exhibit spaces and nature trails, as well as state-of-the-art enclosures for raptors that can no longer survive in the wild. More than 38,000 people visit VINS annually, Rattigan said, including hundreds of youths on field trips and at summer camps. VINS staff rehabilitated 652 injured birds in 2018 and expects to help nearly 700 by the end of this year.

Although the campus offers many forest trails, few visitors use them, and Rattigan has been searching for a remedy to that. Based on attendance at similar walks in the region, he believes the Forest Canopy Walk will draw new audiences to VINS, entice them into the wild and help them learn more about the importance of forest conservation. The walk gives visitors extraordinary access to the topmost ecosystem of a forest, where the largest trees concentrate their leaves to gather as much sunlight as possible.

Rattigan was inspired to create the forest walk after exploring one in Costa Rica in 2013, as well as by his interactions with Margaret "Canopy Meg" Lowman. Considered the mother of forest canopy science, she's a Florida-based author, educator and biologist who has designed canopy walks for sites worldwide and advocates for better understanding of forest ecosystems.

"I think people underestimate how little we know about the forests," Lowman said in a phone interview. Given how many forests have been on fire in the Amazon, Australia, Siberia and Indonesia this year, she noted, there's an urgent need for the public to value forests and for scientists to study tree canopies before they're gone.

Though the walk is first and foremost an educational tool, Rattigan said, it has potential uses in canopy studies and other types of scientific inquiry, such as taking bird censuses and doing bird banding.

VINS staff and board members designed the Forest Canopy Walk with New Hampshire-based architect Tom Weller, then took great pains to protect the environment during construction. They first counted and mapped all of the tree locations and species to assess forest health and safety issues, Rattigan said. 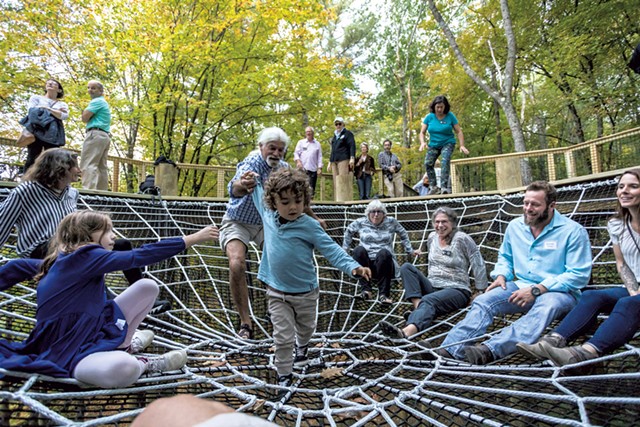 This past winter, when the ground was frozen and protected by snow, North Carolina-based Phoenix Experiential Designs installed 123 telephone poles, according to crew member Austin Oaks. "All of the poles underwent a process called 'mechanical fixation,'" Rattigan said, "which seals them and minimizes the leaching out of chemicals into the soil and water."

Phoenix built the rest of the walk on-site from May through September. Normally, the company uses helicopters to place items in forests, but that method would have disturbed the long bat-mating season, Oaks noted. Instead, "We constructed scaffolding and built old-style cranes to raise each of these small sections," he said, "and we did it all with block-and-tackle and pulley systems."

The Forest Canopy Walk begins behind the raptor enclosures on the McKnight Trail. The entrance is marked by two huge, curved cedar sculptures that create what Rattigan likes to call "a portal, a transition from the ordinary to the extraordinary." Crafted by Herb Ferris of Windsor, the portal gives way to a meandering bridge and then comes to a T; from there, visitors can walk right or left around the loop.

"I was amazed to realize that the canopy walk provides accessibility to all," wrote VINS board member and longtime Woodstock resident Tom Weschler by email. The ADA-compliant walk works for "moms with strollers or those in wheelchairs, because the walk is all on one level and takes advantage of the sloping topography to generate the height gain," he continued. The hill drops away beneath, so that visitors are 50 feet above ground level after progressing a few yards down the walk.

Whether maneuvering along the walk or climbing stairs to the four oversize structures, visitors have plenty of opportunities to experience the forest — and take calculated risks. Looking through the rubber mesh walkway at the ground below takes courage, as does feeling the top of the tree house sway in a gust of wind or rolling into the middle of the (very safe) spiderweb, which is made of rope and suspended 43 feet above the ground.

Those who suffer from acrophobia may prefer to focus on the great horned owl sculpture at the owl's nest or the detailed feathers of the sculptures at the eagle's nest. One eagle perches on the nest in a natural pose, while the other appears to be approaching in flight (suspended on cables attached to nearby trees) with a fish in its mouth.

"They both have 11-foot wingspans, so they're pretty big," sculptor Wendy Klemperer said of the metal artworks she created for the walk. "Charlie was expecting something smaller, but I got a little carried away. But actually, scale-wise, I think they're perfect."

Though the birds are about twice the size of real-life eagles, their body proportions are anatomically correct, she noted. Based in Brooklyn and New Hampshire, Klemperer has created other sculptures for VINS, including the great horned owl that once greeted visitors but now tends the owl's nest.

"We love the marriage of nature and art," said Chris Collier, VINS' director of on-site programs and exhibits. The eagle sculptures draw attention to the fact that, over time, eagles create some of the largest nests of any bird. The biggest found to date, located in Florida, is "9.5 feet across by 20 feet deep and weighs about 5,000 pounds," Collier exclaimed.

Rattigan called the October 12 event a soft opening: "It's a chance for us to discover how many people are going to come and how they will experience the walk."

Over ensuing weeks and months, VINS staff and volunteers will answer visitors' questions and ask them how they experience the walk and how it could be improved. "This is primarily an information-gathering season," Collier said.

Some interpretive panels are already in production. Small ones will describe specific trees, insects and other species; large ones will explain forest-related concepts, such the ecotone where the walk is situated. "An ecotone is where two habitats meet," Collier said. The walk takes visitors through an "ecotone zone between a forest and a wetlands, where the diversity of life is greatly increased."

Collier finds the walk's location by the Ottauquechee perfectly fitting, given that VINS was founded in 1972 by four people intent on cleaning up the river. Their success is readily apparent in the diversity of wildlife that now thrives in the watershed.

The price tag for the walk is $1.7 million. To date, VINS has raised more than 88 percent of it through grants and donations.

"We are so appreciative of those people who shared our vision and actually made the decision to invest with us," Rattigan said. "It's extraordinary that well over 50 people and organizations thought that this was an important thing to do."

Lowman hopes the walk becomes a statewide education resource. Compared with other such sites in the Northeast, "it's much more extensive," she said. "This one is brilliant. It's over-the-top wonderful."

As of Saturday, October 12, the Forest Canopy Walk is open during normal business hours (daily from 10 a.m. to 5 p.m.) and is included in the price of admission at the Vermont Institute of Natural Science in Quechee. $14.50-16.50; free for members and kids 3 and under. vinsweb.org