Twenty years ago, Travis Card started filming his friends skateboarding. As a skateboarder himself, Card recognized that some of the skaters in his crew were getting really good and that someone needed to capture them.

"I became a filmer because I wasn't on the level of some of my very best friends," he recalled. "But then again, not many people are."

What began as a modest attempt to document his friends' progress soon evolved into a full-fledged effort to land Vermont skaters in major skateboarding publications. Card and his friends saved money to travel to skate contests and to film tricks in far-off destinations, such as California and Barcelona, Spain. Within 10 years, Card had produced three full-length skate videos, and several of his friends were well on their way to turning pro.

"If you have a buddy and you have a phone, you can make a video." Travis Card tweet this

Much has changed since Card released his last film, Good Things Come to Those Who Skate, in 2010. Skateboarding evolved from a public nuisance into an Olympic sport. Sprawling concrete skate parks, such as Burlington's Andy A_Dog Williams Skatepark, started popping up in cities around the world. Social media platforms helped increase visibility and representation in skateboarding.

Through all these changes, Card continued to film his friends. 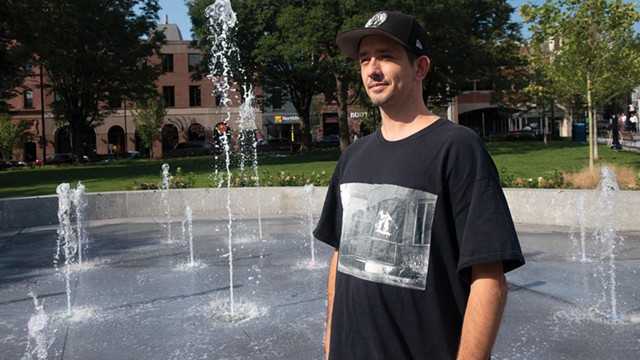 "It's the kind of thing I'm involved in just to pay my dues to the community that I hold dear to my heart," said Machia, who also contributed motion graphics, editing and photography to the iHomie project.

Though Card shot his previous films with video cameras, he captured iHomie entirely on smartphones in the vertical format.

"I used to lug around $10,000 worth of camera equipment to skate spots just to get a clip," Card said. "I wanted to show people that if you have a buddy and you have a phone, you can make a video."

The film is also unique in that it features skaters in their thirties. Due to the physical demands of street skating, most skaters highlighted in films are in their twenties. Kyle Burroughs and Collin Hale have appeared in each of Card's films and were among the first in the crew to have sponsors. In iHomie, they skate full parts — video segments devoted to a single skater — though both are juggling the responsibilities of fatherhood and careers.

Burroughs, a chocolatier and personal trainer, still makes skateboarding look as effortless as he did in his twenties. Hale, a sous chef at Doc Ponds in Stowe, was one of the last skaters to join the project and did not expect to produce a full part.

"Travis is very good at pushing people in a reasonable way," Hale said. "He can bring out the best in a skater."

Notably, iHomie features the last full part by Dave Abair, who died unexpectedly in June at age 34. Originally from St. Albans, Abair relocated to San Francisco, where he became a pro skater known for creatively stringing together tricks in places where most people wouldn't even think to skate.

"Dave always had a very unique approach to skating," Card said. "He just has an eye for new spots." Abair returned to Vermont last November to film his part, which appears first in the film.

One skater whom viewers won't recognize from Card's previous work is Tyler Jermano, 30, who produced his first-ever full-length part for iHomie. Jermano, who recently moved to Vermont from Saranac Lake, N.Y., says he was already familiar with Card from skating at Talent Skatepark in South Burlington when he was younger.

"We used to fan out on him and Collin Hale and everyone who was in his videos," Jermano recalled. "Then I moved over here and happened to become friends with him. Now I'm in one of his videos. It's a trip!"

In addition to its four full-length parts, iHomie features a section of friends skating and a section filmed entirely at Winooski's Landry Park skate park, aka "the Woo" among skaters. Those sections give people under the age of 30 a chance to shine, including Chris "Cookie" Colbourn, who in December 2019 became one of the latest Vermont skaters to turn pro.

Throughout its 30-minute run time, iHomie pays tribute to the hardworking Vermont skaters who helped pave the way for future generations and acknowledges how technology is reshaping the industry. Skateboarding will continue to evolve, but at its core, it's all about spending time with your homies.