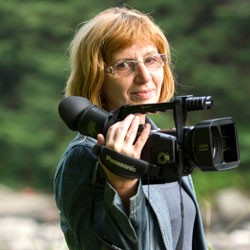 Mira Niagolova’s unfinished film about refugees in Vermont runs only about 35 minutes so far, but it manages to encapsulate the transitions and contradictions experienced by immigrants who come to the state as displaced persons.

“Welcome to Vermont,” shown last week at Middlebury’s Ilsley Library as a work-in-progress, focuses on newcomers from Iraq, Bosnia, Somalia and Rwanda. Without narration, the documentary suggests how the refugees differ from one another despite having some similar perspectives on their lives in Vermont.

“One reason I made this film is that there are so many stereotypes about refugees,” Niagolova said at the screening. “Every person, family and group is actually unique.”

The inexorable process of assimilation can be seen within a single Iraqi family. A beautiful woman in her early twenties with long, wavy black hair speaks colloquial English as her mother, wearing a head scarf, looks on in silence. Viewers are also introduced to a younger daughter who’s preparing excitedly for a night of trick-or-treating. This girl seems as thoroughly American as her costumed Essex friends with whom she primps and giggles.

A Bosnian man who looks remarkably like the late comedian John Belushi speaks of his love for Vermont and pride in America as he turns the spit for a goat he’s roasting in his backyard. “I’m homesick very much,” he then adds. “I’m dying to go back.”

The Bosnian also complains about the ignorance he has encountered in Vermont. “People don’t know where Bosnia is. They think Muslims are all terrorists.” A few seconds later, he laments that “everything here is about money — everything.”

Refugees from Somalia and Rwanda interviewed in the film have nothing negative to say about Vermont.

A Somali woman, wearing a full-length dress and a headscarf, says she has experienced no racism in Burlington. “Everything is good here … Vermont is calm,” she says. So much so, the woman adds, that some Somalis who were resettled in other states are now making their way to the Burlington area.

“Vermont has been a shelter for me,” says a young Rwandan man chopping greens at New Moon Café on Cherry Street in Burlington. “This is a place where people are willing to open up to diversity.” And he, in turn, has opened up to Vermont. “What’s amazing,” he marvels, “is that I now snowboard.”

Contrary to some outsiders’ assumptions, refugees generally “don’t want to remember” what happened to them, or even where they came from, Niagolova says. “They want to move on.”

She speaks from personal knowledge of displacement. Although Niagolova does not qualify as a refugee, she did leave her native Bulgaria in 1992 after the fall of communism. She initially moved to Canada with her husband, who had gotten a job at a computer company in the Montréal area, and their two children. A transfer to the IBM plant in Essex brought the family to Vermont 10 years ago.

Niagolova, who had worked as a cinema producer for Bulgarian state television, made a documentary in 1999 about Eastern European girls trafficked to the West as prostitutes. She followed that in 2002 with A Parallel World, an examination of a refugee camp on the Kosovo/Macedonia border, which was also screened at the Ilsley last week. In addition, Niagolova worked for six years as director of the Vermont International Film Festival.

“Welcome to Vermont” will total about 50 minutes — standard television documentary length — when completed two or three months from now, she says. It will also be shown in condensed form as one of the segments of Freedom & Unity: The Vermont Movie, a collaboration that examines the state’s past, present and future. It, too, is supposed to be finished by spring.

Niagolova hopes to recoup at least part of the $60,000 cost of her film, which has been two years in the making, by selling it to the Public Broadcasting System or some similar outlet. “The tough part is to make it as universal as I can, to not have it seem to be only about Vermont,” she notes. “It is a story that could be told about a lot of places.”