James Wilson wasn't a world traveler. A farmer born in 1763 in Londonderry, N.H., Wilson moved with his family in 1796 to Bradford, Vt., where he remained until his death in 1855. Though he lived into his nineties, he never sailed across the ocean or even ventured far outside New England. He didn't have much formal schooling beyond training as a blacksmith.

Yet in 1810, this rural Vermont farmer became the first person to manufacture and sell American-made globes. Wilson produced the first models in his farm workshop. Around 1817, he moved production to Albany, N.Y., where J. Wilson & Sons turned out hundreds of these finely crafted instruments for customers all over the country.

Wilson's remarkable story is the subject of an exhibit that opened on July 3 at the Vermont History Museum in Montpelier. "A New American Globe: James Wilson of Vermont" showcases examples of Wilson's handiwork while inviting visitors to consider where place names come from, how and why people make maps, and what those maps can — and can't — tell us. It's a history lesson that couldn't be timelier.

The main attraction is Wilson's globes themselves. Three of them, each 13 inches in diameter, occupy glass cases in an alcove just inside the museum entrance. Two are terrestrial globes dating from 1810 and 1831, respectively, while an 1831 celestial globe shows a map of the stars. From a distance, they don't look like much, but up close, it's hard to take your eyes off them.

Wilson made the 1810 globe himself, using papier-mâché, plaster, brass and wood. He made a few in that first batch; this is one of just four that remain. The others are housed at the Bennington Museum, the Bradford Historical Society and Harvard University. This one looks like it belongs in a library with creaky wooden floors and shelves filled with leather-bound books — not like something that was assembled in a farm workshop.

Contemplating Wilson's early handiwork, you can't help but wonder: How did this 19th-century farmer in rural Vermont learn enough about cartography, geography, printing, woodworking and engraving to pull this off?

"It's amazing, isn't it?" marveled Amanda Gustin, director of collections and access at the Vermont Historical Society, which runs the museum. "It's a work of truly astonishing detail and complexity for someone just to have figured out."

Gustin and her colleagues spent the last 18 months doing a thorough reexamination of Wilson's life and work — the first such effort in 60 years. The yearlong exhibit is "just the tip of the iceberg," she said. They plan to publish a scholarly article on their findings; a six-part podcast is also in the works, along with some programming over the winter.

Gustin also collaborated with me on developing this summer's Good Citizen Challenge (see below). She was working at the front desk the day I stopped by to view the exhibit.

Few detailed records of Wilson's process survive, Gustin is quick to point out. Historians have pieced together evidence from his correspondence, the sources he consulted and the physical objects he left behind. "There's still so much we don't know about him," she conceded.

What is known is that, despite his lack of formal education, Wilson was intensely curious and an avid reader and lifelong tinkerer. In addition to the globes, at the very end of his life, he made a few mechanical wooden orreries — models of the solar system with a hand crank to move the planetary bodies. The only surviving model, about the size of a toaster oven, is part of the exhibit.

Gustin points out that planet Earth in Wilson's orrery is angled in a way consistent with the seasons. The device is correctly aligned according to the knowledge of the period.

Around the time Wilson moved to Vermont, he visited Dartmouth College and saw his first globe, which had been imported from Europe. It captured his imagination, and he decided to try to make one himself.

It took him about 15 years to figure it out. Along the way, Wilson purchased an early set of the Encyclopedia Britannica — now housed at the Bennington Museum — and reviewed the entry on globe making. He corresponded with engravers, cartographers and scientists. Though many accounts of Wilson's life claim that he made every piece of the globes himself, Gustin said it's more likely that he worked with a network of skilled craftspeople who sourced parts.

A panel in the exhibit explains that Wilson most likely drew on several sources to compile his map, which he printed on paper in curved sections called gores and plastered to the sphere. Though the map was printed, Gustin said, someone painted it by hand, possibly Wilson's daughters. They may also have drawn the signs of the zodiac represented on the wooden horizon ring around the 1810 globe. These are a way of keeping track of time and the seasons, not an endorsement of astrology. 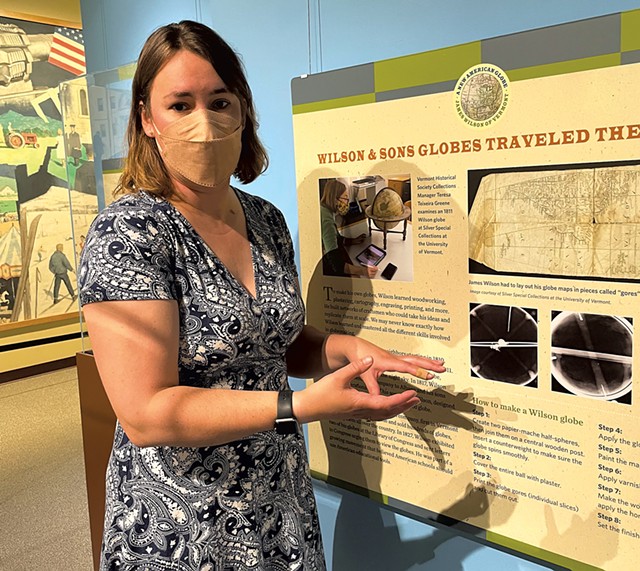 In preparation for the exhibit, Gustin and her team had the globes x-rayed at Central Vermont Medical Center. The images revealed a bent nail driven into the surface of the 1810 globe — an early version of a counterweight to make it spin correctly.

These early models aren't perfect. The 1810 globe includes several alternate spellings from the time period that read as errors today — "Pensilvania," "Sious," "Iraquois" — and it's missing the Rocky Mountains, among other locations. California is labeled New Albion. A later version mistakenly erased the lower half of Australia, then called New Holland.

But Wilson's globes had one significant advantage over their foreign competition: price. Gustin found evidence that globes imported from London at the time cost $200, or roughly $3,300 today, adjusted for inflation. A pair of Wilson's terrestrial and celestial globes retailed for just $50 to $75 — $750 to $1,250 today — making them more affordable for schools seeking these valuable teaching tools.

Wilson's globes were also welcomed by those who felt that students in the new republic should learn from American-made tools. Evidence suggests that Wilson embraced this early Buy American movement, espoused by philosophers and educators such as Noah Webster and Emma Willard. The cartouche on his first globe declares it to be "A New Terrestrial Globe." By 1811, when he made his next batch, he'd changed the name of the product to "A New American Globe."

Besides recounting Wilson's history, the exhibit explores what it means to make a map. A long hallway just past the globe display invites visitors to compare different kinds of maps and to think about who drew them and what information they convey.

The exhibit includes numerous maps of Vermont that exemplify that principle: The state as we know it didn't exist before European settlers arrived. The exhibit doesn't explicitly draw that connection, but it presents evidence of the process in action.

For example, another section prompts visitors to consider what's in a name. What we know as Mount Mansfield was known to the Abenaki as Mozôdebiwajok, meaning Moosehead, "because the mountain looks like a moose head seen from the side," a panel explains.

Abenaki monikers are enjoying a resurgence today, as communities and local institutions reassess the messages embedded in place names. Just last week, the Woodstock Inn & Resort announced that it had renamed its ski resort, formerly known as Suicide Six. The new name, Saskadena Six, comes from an Abenaki word that means "standing mountain."

Gustin said the exhibit's opening on July 3 drew a large crowd. On the day I went, I watched several visitors study and photograph the globes, including Josh and Adam Pascoe, a father-and-son pair visiting from Arizona.

"He was an ordinary farmer, and he decided to invent this?" son Adam said. "How did that happen?"

My takeaway from the exhibit: If Wilson could manage all of this 200 years ago, just imagine what's possible now.

How to Visit for Free 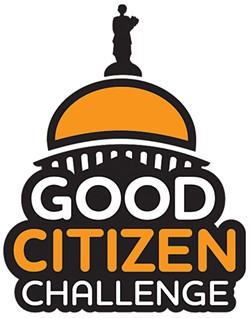 The Wilson exhibit was the inspiration for this summer's Good Citizen Challenge, a youth civics project organized by Seven Days and its parenting publication, Kids VT. Challenge participants must complete a row of five activities on a bingo-like scorecard. Touring the Vermont History Museum occupies the center space.

The Vermont Historical Society, as a partner on the Challenge, has waived admission fees all summer long for participating kids and their families. The grand prize for completing a row of five activities is a free trip to Washington, D.C. One lucky winner will also win a brand new globe.

In the words of Amanda Gustin, the museum's director of collections and access, "Learning history is crucial to understanding the world around you, and we hope to see many participants at the Vermont History Museum this summer."

Find a scorecard, rules, prize info and a list of activities at the Vermont History Museum, in the summer issue of Kids VT or at goodcitizenvt.com.

"A New American Globe: James Wilson of Vermont," through June 2023 at the Vermont History Museum in Montpelier. Learn more at vermonthistory.org.