A New Doc on Police Militarization 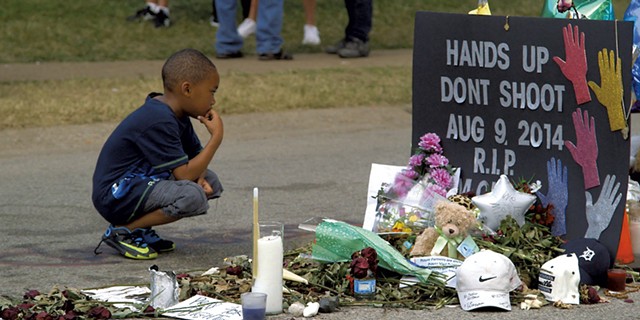 After a long, hot summer that brought story after tragic story of police shootings of unarmed African Americans, the time is ripe for a screening of Do Not Resist. Partly a chronicle of protests that followed the 2014 death of Michael Brown in Ferguson, Mo., and partly a dissection of modern policing tactics, the 2016 documentary is the directorial debut of Craig Atkinson.

The director, best known as cinematographer of Detropia, a moody documentary about the decline of Detroit, will be present to take questions when Do Not Resist is screened this Thursday, August 25, by the Burlington Film Society and Vermont International Film Foundation. He'll be joined at the Q&A by Burlington Deputy Police Chief Shawn Burke.

Atkinson's film presents a fly-on-the-wall position, with no talking-head analysis or overt messaging, but the portrait it paints of modern policing is not flattering. The documentary draws implicit connections between the increasingly military-style tactics — and equipment — of modern law enforcement and incidents like the one in Ferguson. We watch as a popular seminar trainer at a police convention instills fear of the "monsters" on the streets, then see how that fear plays out in a SWAT raid that yields little more than a small-time pot bust. One expert suggests that, as criminal-profiling software becomes more sophisticated, cops will soon be poised to arrest you for a crime before you've committed it. (One wonders if he's seen Minority Report.)

In a director's statement on the film's website, Atkinson notes that his father was a cop in the Detroit area for 29 years. "What I wasn't familiar with ... was the effect the War on Terror had on police work," he writes. "Making this film was an attempt to understand what had changed."

One thing that's changed is that police departments have stocked up on heavy-duty tools of war, with the help of the U.S. Department of Defense surplus-equipment program. Do Not Resist covers the rise of military equipment such as mine-resistant ambush protected vehicles in policing — a trend also documented on the local level in a 2014 Seven Days cover story by Mark Davis. (As of September 2015, the Burlington Police Department no longer accepts equipment from that federal program.)

"Our access [to law enforcement] seemed to be directly tied to the amount of negative press the police were getting at that time," Atkinson writes about making the film. "The urgency of the situation, however, motivated us to continue."

Not yet in national release, Do Not Resist won the Best Documentary Feature award at New York's Tribeca Film Festival. Variety's April review praises the film for "shin[ing] a broader light" and speculates that it might "generate the kind of anger necessary to galvanize the public."

After a summer in which public anger and grief have run at a high, perhaps the doc — and discussions following the screening — will serve more as an instructive postmortem than as a wake-up call. Atkinson writes that he hopes "both community members and officers working hard to challenge the culture of policing within their departments use this film to illustrate the dire need for change."