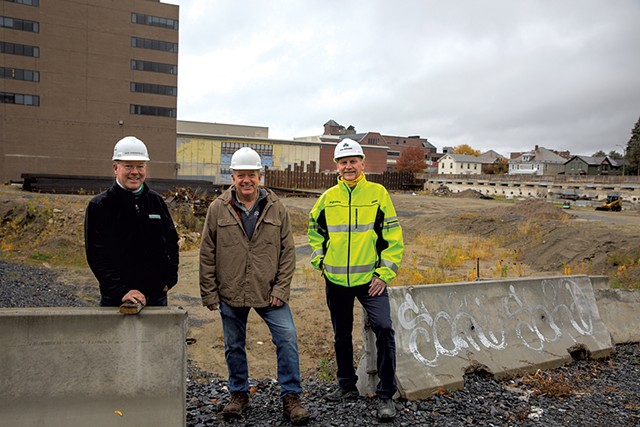 As developer Don Sinex tells it, he got a gut feeling about a year ago that his business partner in the CityPlace Burlington project was getting cold feet.

So, to hedge his bets, Sinex asked a trio of local businessmen in January about becoming his partners if the multinational company, Brookfield Asset Management, pulled out.

Sure enough, by July, Brookfield had decided to sell its ownership stake back to Sinex. The three local men — Dave Farrington, Al Senecal and Scott Ireland — proceeded to buy a combined 50 percent share in the project from Sinex.

The new partnership filed a zoning application last month and released new plans for the three-acre site once home to the former Burlington Town Center mall in the heart of downtown.

It's been six years since Sinex first proposed redevelopment of the mall site, four years since city voters agreed to back the project and three years since the mall was torn down, leaving a gaping hole between Bank and Cherry streets.

But getting the long-stalled development moving again won't be simple. In early September, the city sued Sinex for failing to build the project on the original timeline. At the heart of the dispute is a city demand that the developers keep a promise to reconnect two streets, St. Paul and Pine, to Bank and Cherry. North-south travel on the two streets was cut off when the mall was built in the 1970s.

"We're not trying to stop anything," Mayor Miro Weinberger said in an interview late last month. "We're trying to get them to do what they committed already to do."

Weinberger finds himself in a familiar position: Should he trust Sinex, a developer from out of state who has burned him before? Or should the city keep the pressure on the builders by continuing to fight in court?

With a new partnership made up of longtime locals, Farrington thinks it should be the former.

"We've made more progress in eight weeks than Brookfield and Miro did in two years," he said. "We've got the ball rolling now and want to keep it rolling."

The three businessmen say they're already familiar with the project and cite their experience building in Vermont: Farrington is president of Farrington Construction; Ireland is president of concrete company S.D. Ireland; and Senecal owns Omega Electric Construction. The trio consulted on an older CityPlace design in 2015 and previously made small investments in the development.

Their plans for the site differ significantly from Brookfield's proposal, which once featured 14-story towers. The team has nixed the 196-room hotel and all of the proposed office space, two sectors wrecked by the coronavirus pandemic. They propose building more housing instead: 426 total units, including 84 affordable apartments; Brookfield's most recent plans called for 357 total units.

Two towers remain in the plans, but they would be downsized to one 10-story and one nine-story building. Combined, the buildings would house 45,000 square feet of ground-level retail; the south tower would feature a rooftop restaurant and observation deck. The developers aim to break ground in September 2021. 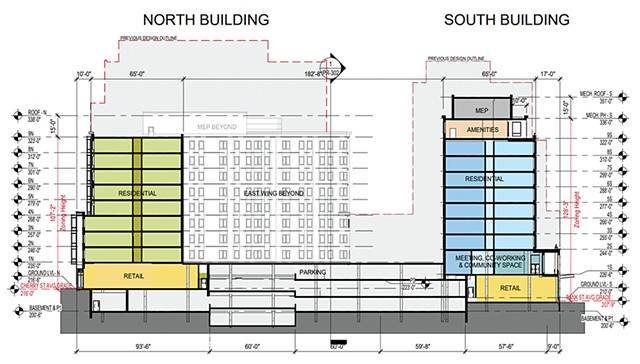 Restarting construction could reinvigorate downtown Burlington post-pandemic, according to Senecal, who said the businesspeople he's spoken with are all very supportive.

"I think they're encouraged that three local developers want to help the outsider come in and build this thing, and we won't quit until we get some progress going here," Senecal said. "Both Dave, Scott and myself have built multiple other projects in the surrounding towns and in Burlington, and that's what we intend to do here — to see this one through to the end."

The developers have back-burnered plans for the former Macy's building, adjacent to the main site. Sinex once planned to renovate the building into office space for the University of Vermont Medical Center, but the pandemic has led the hospital to reassess how much, if any, space it wants downtown. Hospital spokesperson Neal Goswami told Seven Days that while the medical center expects to downsize its offices, "it is too early to know what our exact needs will be."

Previous versions of the project carried a $225 million price tag. Sinex said the new plan is to build CityPlace in three phases, starting with about 180 apartments in the north tower. The first phase is expected to cost $74 million, the second $56 million and the third $44 million, he said, an approach he hopes will make the construction easier to finance. His plans call for the entire development to be built by November 2026.

The city "ought to have confidence because it's a smaller-scale project the way we're approaching it," Sinex said. "That means it will take a little longer to complete it, but that's the cost of being conservative."

Financing is still a major unknown, something that dogged the project even when Sinex had the financial heft of Brookfield behind him. This month, the new team will present its plans to the federal Department of Housing and Urban Development, the first step in applying for a competitive mortgage program through the agency. If approved, loans for CityPlace would be federally backed and protected against default.

That's an attractive prospect for the AFL-CIO Housing Investment Trust, which only funds projects underwritten by HUD. Founded in 1984, the trust oversees a $67 billion mutual fund that invests primarily in multifamily housing projects, particularly those with some low-income units. Vermont AFL-CIO president David Van Deusen said he's been in talks with Sinex and the trust for months and is confident the fund will invest in CityPlace.

In exchange, the developers would agree to hire union workers. The Vermont AFL-CIO would create an apprenticeship program meant to help women and people of color learn the trades on the job.

"I get that there's baggage," Van Deusen said of the CityPlace saga. "All I can say to that is: We're making a good thing happen here, and we really do have confidence that this will come together and that it will be good for the community."

Sinex says the recent progress — and his partners' substantial investment to buy out Brookfield — should prove to Weinberger that they're serious about CityPlace. But they worry that Weinberger is holding a grudge.

Weinberger and other city officials, however, say there's still old business to attend to. Their chief concern is restoring full north-south travel on Pine and St. Paul streets — improvements that Sinex promised from the start. The development agreement says that the builders will construct the streets and the city will reimburse them with $21.8 million in tax increment financing dollars, a funding plan that voters approved in November 2016. The debt would be repaid with the additional tax revenue generated by the project itself.

Weinberger says construction delays have put the TIF dollars at risk, and the city's lawsuit argues that the city shouldn't have to reimburse the developers. The TIF bonds originally had to be issued by June 2021, but the state legislature recently extended that deadline for another year due to work stoppages and economic hardships during the pandemic.

In the original construction schedule, CityPlace would have been complete — and its tax revenues flowing in — before the city had to issue the TIF bond. But now, the city's June 2022 TIF deadline would be just nine months after construction begins, assuming it starts on time. By that point, the project will only have generated a fraction of the TIF revenue the city would need to repay its debt, Weinberger said.

"That could be millions of dollars in annual liability that we don't have revenues for," he said.

Taxpayer liability would increase if the partners didn't complete the project. The current development agreement includes a provision allowing the city to charge the developers additional property taxes if TIF revenues fall short, a safety net Weinberger felt was sufficient when deep-pocketed Brookfield was at the helm.

"Who's going to provide that financial heft if that party's no longer there?" he asked.

Weinberger said the city is open to discussing other methods to ensure the roads are built without putting taxpayers at risk; one option would require the developers to set aside a cash reserve. Mediation sessions between the parties are scheduled to begin this month, which Weinberger said could result in a new development agreement that formalizes some of those protections.

"We're willing to be reasonable," he said.

City Council President Max Tracy (P-Ward 2) is less open to compromise. He thinks the city should have sued sooner and the developers should pay for the roads, since he doubts TIF is a viable option. Tracy said he has no interest in hearing about the partners' new plans until they provide financial assurances to the city. And Tracy said he has little confidence in Sinex.

"He's the one who got us into this mess in the first place," Tracy said. "He's now brought on local partners in what I read as a move to try and create political pressure on us to act."

"The trust is just so fractured," he added.

Burlington-based attorney John Franco has had plenty of squabbles with CityPlace developers — he's sued them or appealed their permits several times — but he's taking their side in this fight. Franco thinks it's ludicrous not to reimburse the developers for the roadwork, likening that demand to a "lead balloon."

Ironically, Franco once represented a group that sued over the 2016 TIF vote. The Coalition for a Livable City — which opposed the height of the project, among other concerns — had argued that the ballot language was misleading; a judge ultimately dismissed the claim. For once, Franco said, "it's not the evil, hippie-dippie opponents to the project" that are holding it up.

"Right now, the problem with getting this project moving forward is the City of Burlington," he said. "What is the endgame here? I don't get it."

Farrington said he's confident the project will produce enough revenue to cover the TIF debt, at least for St. Paul and Pine streets. He's less certain about the other upgrades spelled out in the development agreement — which include sidewalks, street lighting and other features on the sections of Cherry and Bank streets that abut the project — but looks forward to hashing it out in mediation.

The development team can count at least one city official in their corner. Councilor Ali Dieng (I-Ward 7) cast the sole vote in August against suing the developers, and he urged the city to instead strive for compromise. He said Weinberger shouldn't let negotiations about street improvements delay the project further.

Dieng is also one of a few councilors who have spoken with the new partners. After meeting with Farrington and Ireland last month, Dieng said he's never felt more optimistic about CityPlace.

"I just believe that it is time for all of us to push our egos aside," he said. "If both the city and the developers can find a common ground and not get into court, I think that's ideal."

Correction, November 5, 2020: An earlier version of this story mischaracterized the type of mediation that the parties will attend later this month.

The original print version of this article was headlined "Solid Foundation?"