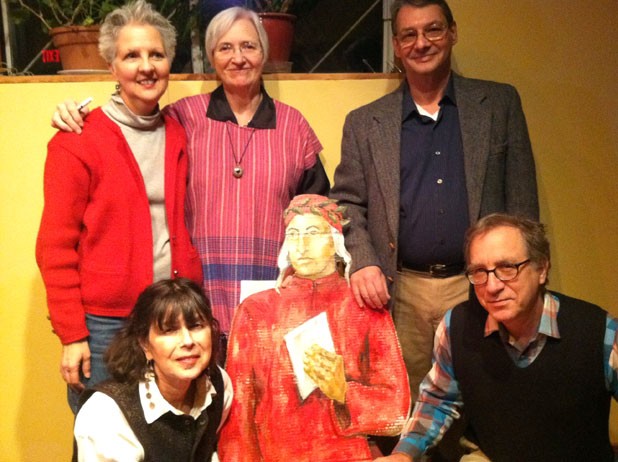 Seth Steinzor, lawyer by day and poet the rest of the time, took the podium in Studio B last Saturday night at Burlington’s North End Studios. The room itself had been transformed from its daytime personality as a Zumba studio into a softly lit haven of literature, complete with microphone, refreshments, seating for a small crowd and books for sale.

As the opening act of the newly formed Vermont Writers Co-op’s debut event, “Off the Page,” Steinzor read from his 2010 book-length poem, To Join the Lost. And that’s where the similarities to just about every literary event you’ve ever attended stopped.

Steinzor didn’t just intone from the book: First, he passed out printed copies of the passage he planned to read. Then he assigned four audience members specific parts, as if the crowd were getting ready for its first reading of a play. To Join the Lost is a modern retelling of Dante’s Inferno, featuring various latter-day souls walking around in Hell with demons lopping off their extremities. Steinzor needed one man to play a demon highway patrolman, a second to play Lee Atwater, a third to play someone named Bunky and a fourth to stand in for Dante himself.

Never mind that Steinzor was flanked by a lifesize, hand-painted, cardboard facsimile of the 13th-century Italian poet. Dante sat folded in a chair, silently watching the proceedings.

Dante was a contribution of Susan Weiss, who is working on her second novel when she’s not teaching writing at the Community College of Vermont. A cofounder of the 6-month-old co-op, she helped organize Saturday’s event, and created the cardboard poet with the aid of an artist friend in Massachusetts.

“We’re kind of playing around with the idea of audience participation,” Weiss said. For her reading later in the evening, she passed out cardboard “desks” and invited the audience of about 30 people to participate in a writing exercise following a prompt. When she reads from her novel-in-progress during the second planned “Off the Page” on March 2, Weiss will bring musical accompaniment: a clarinetist.

Novelists and co-op members Mary Fillmore and Mark Pendergrast rounded out Saturday’s event by reading from their works-in-progress. Pendergrast, who has also published several books of nonfiction, urged audience members to email him with feedback on what does and doesn’t work in his forthcoming novel. A third event is scheduled for April 6.

Seven Burlington-area writers formed the group last fall because “some of us who are co-op members have had a taste of the publishing world, and it’s a jungle out there. It’s tough,” Weiss said. “And I wanted to find ways to be a writer within the community, not just when I’m sitting at my computer.”

Co-op members hit on the idea of a short, monthly reading series as a way to kick-start progress toward a grander goal: a dedicated writers’ room in Burlington. Beyond the three “Off the Page” events this spring, for which co-op members have agreed to share organizational duties and costs, many of the group’s plans are up in the air. Its stated mission is to support and interconnect a community of writers and readers while exploring different voices and forms. The group is open to new members, but has yet to agree on precise terms.

“It’s an evolving group, and we’re still deciding how big to make it,” Weiss says.

The Vermont Writers Co-op does not have a website. For more information about upcoming events, contact Susan Weiss at swiswb@gmail.com.