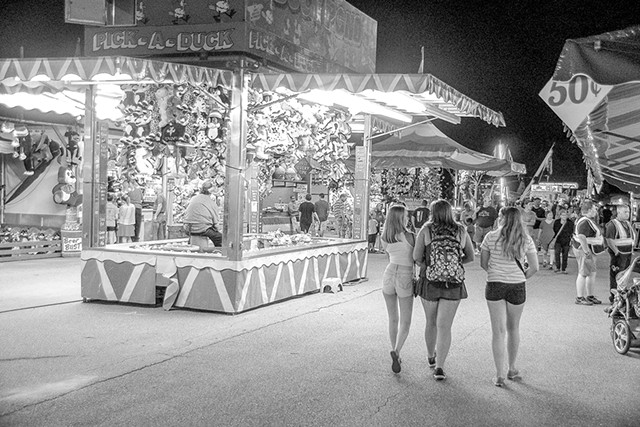 Thumb through the pages of Champlain Valley Fair (Images of America), the new history book by Williston journalist, photographer and publicist Stephen Mease, and you might experience some time-shifting vertigo — as though you'd climbed off the Tilt-A-Whirl and stumbled into the hall of mirrors.

Is that photo of the corn dog and French fries stand from the 1940s or 1990s? What about the shot of the Randolph farmer walking her team of red Holstein oxen in a parade? It's easy to guess the eras of pictures showing the "Strange People" exhibit, the field of Model A Fords, and the young men walking the midway in fedoras, suits and ties. But place a wager on what year the photos of the Soak the Bloke pitching booth or the Terrible Terriers of the Animal Circus were taken, and you could miss the mark by a country mile.

"It was always a tenet of the fair to educate people about agriculture in Vermont." Stephen Mease tweet this

Champlain Valley Fair, published in July, chronicles 100 years of Vermont's largest annual event, primarily through images of the people, animals, food, games, rides and attractions that have drawn generations of Vermonters, year after year. All the photos are reproduced in black and white, even recent ones, such as that of the 2020 Essex High School commencement ceremony, in which all the graduates are wearing masks and gowns. The effect gives the book an archival appearance.

Some chapters, such as the one titled "Big Concerts," highlight how much things have changed since the first fair was held, in 1922. The musical headliners in 1960 included Irish songstress Carmel Quinn, Huckleberry Hound and Friends, and Zippy the Chimp. In 2008, the headliner was Sir Elton John, performing his first-ever show in Vermont. That year, the nonprofit Champlain Valley Exposition, which organizes and hosts the fair, repainted the grandstand, and Ben & Jerry's issued a limited-batch ice cream flavor in the musician's honor, called Goodbye Yellow Brickle Road.

The book, which was edited by Mease's wife, Cheryl Dorschner, also highlights how the fairgrounds themselves have evolved, with the disappearance of the horse track and motor speedway. Notably, it documents the grandstand fire that occurred on the morning of July 11, 1965. That blaze collapsed the roof in five minutes and razed the entire building in 20 minutes. Despite the utter devastation, tragedy was narrowly averted. Just hours before, 5,000 people had been in the stands watching a rodeo.

Mostly, though, the book captures the fair's timelessness: the pig races, the gargantuan pumpkins, the death-defying stunts and the carnival rides, many of which look like they haven't changed in decades. It's as though the entire book were a souvenir from one of the fair's old-time photo booths.

In many respects, Mease, 67, was an ideal choice to compile Champlain Valley Fair. In the 1980s and '90s, he worked as features editor, then special sections editor, for the Burlington Free Press, where each year he oversaw the newspaper's exhaustive daily coverage of the end-of-summer event.

Then, from 2004 to 2008, Mease served as communications director for the Champlain Valley Exposition. Invariably, he was the official photographer, capturing thousands of images on the ground and in the air, including those of the mega concerts and backstage meet and greets.

"My biggest regret is that I didn't get my picture taken with Taylor Swift," Mease said. "But I remember her being very sweet and nice to all her fans."

Mease had been intrigued by fairs long before he was paid to promote or write about them. When the Denver, Colo., native was just a child, he recalled, his parents took him to the Seattle World's Fair in 1962 and to the New York World's Fair in 1964. 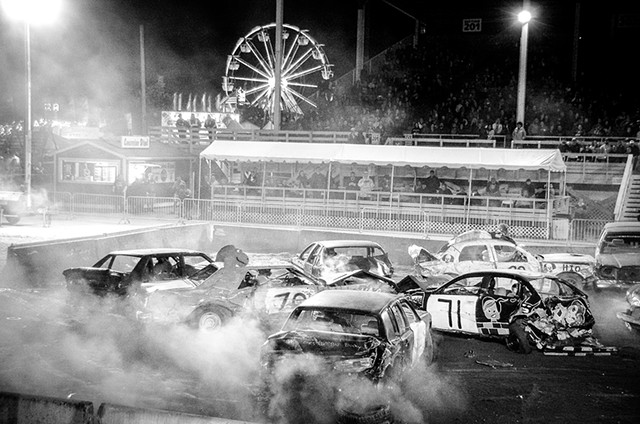 Champlain Valley Fair actually began as an effort to preserve and update the fair's history display, which was created in 1996 for its 75th anniversary. After 25 years, that exhibit was looking rough around the edges, Mease said, with photos mounted on Velcro and newspaper articles, flyers and posters yellowed with age.

So, in April 2021, Champlain Valley Exposition executive director Tim Shea and marketing director Jeff Bartley asked Mease to redo it. Not only had Mease taken many of the photos in recent years, he was also the one most familiar with the closet filled with decades-old scrapbooks, photos, posters, hats and other fair-related ephemera. Mease worked with archivists from the University of Vermont Special Collections Library to fill in the missing pieces.

That history exhibit became the basis for the book. It's also where Mease spoke with Seven Days about his fair faves, how the event has and hasn't changed, and some of its star performers.

SEVEN DAYS: What do you find most interesting about the fair?

STEPHEN MEASE: For me, it's the people. I love seeing the people who are working here that you see every time you come back. And the traditions. When I looked back, it was fascinating to see what the entertainment was when there were so few other entertainment opportunities. For many people, this was the big event of the summer, the time when they would come in from the farm and see what was new — the appliances, the tractors, the shiny new farm equipment. They'd show their cows and bring their chickens and win ribbons and all that, and then go on the carnival rides. It's a community that builds up over the years. 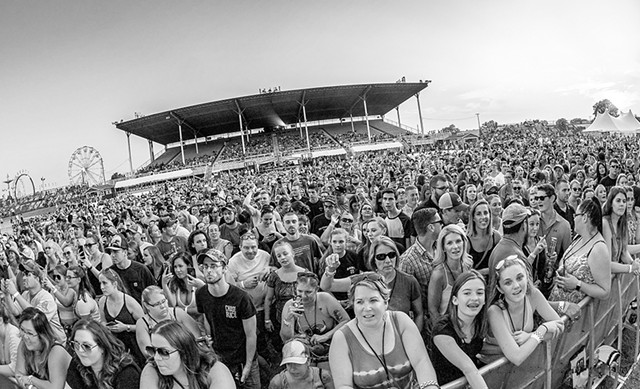 SD: In compiling the history exhibit and then the book, what did you find most surprising?

SM: How much things haven't changed. The big attraction in 1933 was this guy who dives 110 feet [through] flames into a pool. Then there was this show that was here in 2012 called the Penguin Arctic Blast, and they're still lighting themselves on fire and jumping into a pool! The auto thrill shows still keep people entertained, and the oxen and horse pulls still get people out there watching them.

Certain things have gone away. Some of the older folks who grew up around here probably remember when the carnival trains would pull into Essex Junction, and at night the animals would parade down Pearl Street to the fairgrounds. But there's still a sense of history and tradition. There's the timelessness of kids seeing sheep and checking out the chickens. It was always a tenet of the fair to educate people about agriculture in Vermont. That mission has continued. You can still go into the milking parlor and see how they milk a cow. People often don't know where their food is coming from and the work that farmers are doing.

SD: The fair also had some less-than-family-friendly exhibits.

SM: Yes. It had the girlie shows on the midway. Back in the 1930s and '40s, there was the fattest woman and all the other things you think of as part of the midway freak shows. Some of that continued until recently, like the fire-eating and the animal oddities in jars, like the two-headed pig. But even that's gone away.

SD: What's your favorite part of the fair?

SM: I love to get here before the fair opens and watch the activity over in the barns, especially with the 4-H kids. They're washing the cows over by the poultry barn and getting them ready to show. Just that energy in the morning as things are getting set up before the people are let in.

The other thing I like is walking the midway at night and watching the action. Whether it's the kids or the lights and sounds of it all, I just love seeing it. In a lot of ways, the midway is a safe place where young teenagers get their first taste of independence. Their mom and dad brought them here, but they've got their friends with them, and they go on the rides and walk the midway on their own, and they're just having fun.

SD: What were personal highlights from your time on staff?

SM: Having Garrison Keillor come and do his "Prairie Home Companion" [radio] show live from the Champlain Valley Fair. As a communications guy and publicist, that was a great get, to get that kind of national exposure.

And I remember when [actor and singer] Corbin Bleu came. He was the superhot teen star. He actually went out on the midway before the show to ride some rides. Young teens were just starting to have phones, and there was this network communicating with each other, like, "Where is he now?" They would find him on the grounds and swarm around him.

SD: Was there anything sad or bittersweet about working on this project?

SM: Seeing some of the people in the pictures who are no longer here. I hope the book preserves some of those memories. The challenge was that the book has about 200 pictures, and I could have put another 200 in. I feel bad because I'm sure some folks will look at it and say, "Why didn't they have a picture of this in there?" You just can't get it all in.

Correction, August 17, 2022: an earlier version of this story contained a misspelling of Tim Shea's name.

The original print version of this article was headlined "Midway Memories"