A New American Finds Purpose, and 'Family,' in Caregiving 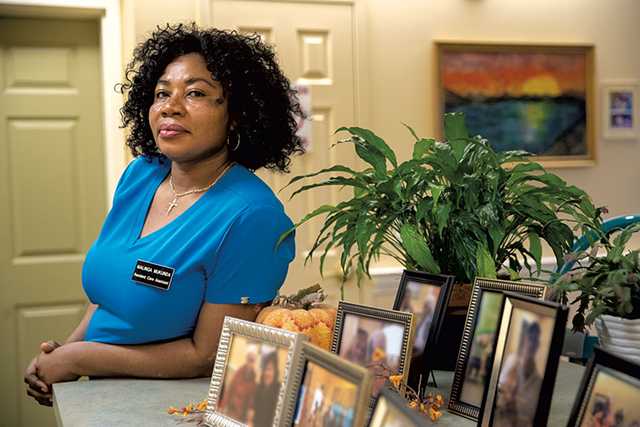 After 12 years in caregiving, Malinga Mukunda still works long days. The Burlington resident starts most mornings at Community Health Centers, where she acts as a health coach for refugees, before switching into scrubs for her full-time job in the memory care unit at the Converse Home, an assisted living facility in Burlington. Her shift ends at 11 p.m.

In addition to her work as a licensed nursing assistant, Mukunda, 40, is taking a class at the Community College of Vermont and raising four children, ages 6 to 16, with her husband.

Her grueling schedule is common among workers in the low-paying eldercare industry. Unlike so many of them, however, Mukunda hasn't burned out. That's because, for her, caregiving is filled with purpose: a way to give back, a chance to pursue a dream deferred and an opportunity to form relationships with the seniors under her watch.

Mukunda grew up in Bukavu, a city on the eastern edge of what was then Zaire, now the Democratic Republic of Congo. The area became the front line when regional conflicts in central Africa erupted into protracted, brutal war in 1996. A teenager at the time, Mukunda said she came home from buying school supplies to find her family missing. She fled to Tanzania and lived there for several years until her boyfriend, now her husband, managed to track her down.

With their young daughter, they arrived in Vermont as refugees in 2005. Mukunda began taking English classes, gave birth to a son, and went to counselors to process the trauma of losing her father, brother and other family members to war.

She also resolved to pursue a childhood goal. "Back home, when I was young, I used to tell my dad, 'I want to be a nurse.' That was my dream," she said.

The eldercare industry offered an entry point. Mukunda read a newspaper ad for a Burlington nursing home that said it would help new hires obtain nursing assistant licenses. She recalled wearing clothes with African patterns to her interview and said she got the job after demonstrating to the interviewer that she could speak and read English. In fact, Mukunda is fluent in four languages.

New Americans have helped fill the demand for caregivers in Vermont's eldercare homes. The field provides newcomers to the Vermont job market with reliable access to continued employment at a "decent" wage, said Jacob Bogre, executive director of the Association of Africans Living in Vermont, a social services agency for immigrants. AALV-VT has trained 137 people to become caregivers since 2011 through a state-funded workforce development program, he said.

The nursing home environment was foreign to Mukunda, but caregiving wasn't.

"In Africa, we take care of our elders at home," she said.

Mukunda said she experienced the struggles of short staffing, watching over as many as 14 nursing home residents by herself and working double shifts when other caregivers called in sick. The quality of care at the facility suffered as a result. "You have to take care of [the] staff, too," she said.

After taking a few months off in 2009 to give birth to her third child, Mukunda got a job in the state-regulated residential care industry. The Converse Home, a nonprofit facility, assigned her to its 16-bed memory care unit for seniors with dementia. She started at $11 or $12 an hour.

Mukunda preferred the smaller setting and found that she was well suited to the challenges of caring for people with dementia. In addition to grooming and administering medication, Mukunda began finding ways to connect with her charges. She read the Bible in French to a Québécois resident. She helped others pick out attractive outfits in their closets, which could in turn provide the self-esteem boost they needed to participate in shared dining and activities.

To work in an eldercare home, "you have to have a big heart," she said. Mukunda also thinks of it as a way of "giving back" for the support she received as a refugee.

She's stayed at the Converse Home for a decade, turning down offers to move elsewhere. During the first nine years, her hourly wage increased to about $16, though a recent raise bumped it to $19, she said. She's taking classes on the side so she can become a licensed practical nurse.

The residents are why she's stuck around, Mukunda said. She has cared for many during their final months of life, an often painful but intimate experience. She recalled one resident who told Mukunda she knew her death was imminent. At home the following weekend, Mukunda said, she worried that the resident would die without her by her side.

She didn't, and Mukunda was able to hold the woman's hand and feed her one final time — watermelon, the woman's favorite food — on the day she died.

"I have lost so many people in my family," Mukunda said. "I always feel like Converse Home is a family for me now."

Looking for info about a specific home?

Look it up on the Vermont Eldercare Navigator.

Tell us what's happening at your eldercare home at eldercare@sevendaysvt.com

Have a complaint about an eldercare home?

In an emergency, call 911. You can also reach Adult Protective Services at aps@vermont.gov or by calling 1-800-564-1612 or by visiting dail.vermont.gov.