A Network of Favoritism Has Flourished in the Vermont National Guard 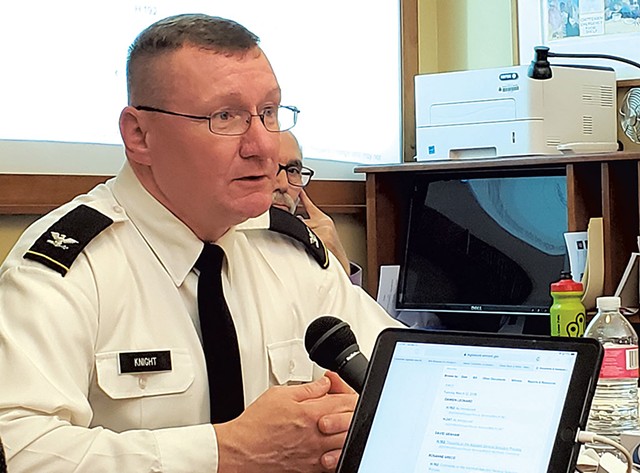 The first outside assessment ever taken of the Vermont National Guard confirms patterns of misconduct and favoritism within the ranks — and also spotlights serious roadblocks to reform.

Adj. Gen. Greg Knight ordered the report in November 2019 as part of his pledge to clean up and professionalize the organization, which has been beset by problems of sexual assault and harassment. The blistering assessment took the National Guard's Office of Complex Investigations 18 months to complete and is based on reviews of internal documents, interviews with 70 officials, and a sweeping survey involving more than 2,000 members of Vermont's Air and Army National Guard units. Investigators limited the scope of their inquiry to three years: 2017 to 2020.

Many issues stem from an informal, untouchable and often retaliatory "good old boy" network that, according to the report, has created "an undeniable chilling effect on the current senior leadership's efforts to make changes for the better."

"Those that move sexual harassers from unit to unit are just as responsible and need to be dealt with." Anonymous Vermont National Guard member tweet this

While the report largely leans on data and is chock-full of military jargon, it's also peppered with brutal quotes drawn from anonymous surveys of Guard members, many of whom broadly railed against leaders.

One used the metaphor of foxes in a chicken coop to describe senior officials who've protected bad actors. "At some point those that move sexual harassers from unit to unit are just as responsible and need to be dealt with," this member said. "They have created more casualties among our ranks."

Another Guard member criticized an "in crowd" that evades accountability and "harbor[s] perpetrators of both sexual assault and harassment." A third contended that Guard leaders have provided letters of recommendation for officials found guilty of sexual misconduct.

"Some of these offenses are so bad they should be on the Sex Offender Registry, yet we try to retain them," this member added. "Our constituents within Vermont are relying on us to provide a safe location for their sons and daughters to serve and we cannot promise that based on our current climate."

In a roundtable with reporters last Thursday, Knight, who took charge of the Guard in 2019, defended his organization as high-performing and always improving. He said that numerous issues brought to light in the report were already being addressed and that senior officials would soon be reeducated on how to properly punish bad behavior.

Knight emphasized the report's more positive conclusions, including that "the overall climate within the Vermont National Guard is positive." The officials who conducted the assessment found no conclusive evidence of hazing and documented significant improvements in numerous areas, including the Sexual Assault Prevention and Response program. While some survey data was negative, 94 percent of Army National Guard respondents felt confident that the chain of command would take a report of sexual assault seriously.

Knight's decision to undertake the assessment sets him apart from previous Guard leaders. His predecessor, major general Steven Cray, vehemently denied the findings of a 2019 VTDigger.org series that this journalist wrote about the Guard. The report echoes and confirms many of those findings.

Despite evidence of progress, the 113-page report is overflowing with troubling details.

Some of the problems noted are systemic. The assessment team found, for instance, that the Sexual Assault Prevention and Response program, despite improvements, is under-resourced and that the offices tasked with addressing discrimination, harassment and other misconduct don't comply with federal rules and lack qualified staffers.

The report makes 35 specific recommendations, including bringing regulations and rules in line with federal and state codes, improving offices tasked with addressing misconduct, and streamlining communication and coordination. While the report notes some improvements in data collection around sexual assault, it spotlights concerning deficiencies — including disparities between the number of misconduct cases reported internally and what is provided publicly each year to the Vermont legislature.

Knight promised to swiftly lay out plans to address all 35 recommendations and suggested that he would invite those who performed the assessment to check back in the future on the Guard's progress. Since being elevated to the job, he has repeatedly used his perch to express zero tolerance for misconduct. Yet the report reveals that most decision making occurs in lower levels of the organization, clouding transparency and "further contributing to mistrust, disengagement, and low morale at all levels."

It's in the lower ranks that the "good old boy" network apparently festers. More than 100 Guard members surveyed claimed that the "severity of most punishment depends on how 'connected' the offender is." The report further details "a lack of consistent punishment for like offenses," as well as instances in which commanders did not record findings of sexual misconduct or penalties in the files of some Guard personnel.

One Guard member said it took the organization two years to boot an officer found guilty of sexual assault. Another said that a victim who reported her case in a restricted, confidential manner was later publicly forced to testify against her abuser.

The assessment reveals stories of sexual assault victims worrying for their safety. One indicated that the Guard repeatedly forced her to interact professionally with her perpetrator. This victim said it took 17 months for the Guard to terminate her abuser, and she "lamented the degree to which the command had taken an interest in the perpetrator's welfare."

In March, Seven Days reported about a longtime Army Guard member, Daniel Blodgett, who at the time remained in the organization despite a lengthy criminal record. The report details a concerning gap between the Guard and local law enforcement, one Knight has pledged to shrink.

"I don't know how we drive change without having candid conversations, even if they are not comfortable," Knight said on Thursday.

The report also documents alleged favoritism and cronyism, with one Guard official stating that, during hiring boards, "I have seen (and been advised) to make the scores fit a predetermined preference." Another observed, "you have to 'know somebody' to land an [Army Guard] job, regardless of your qualifications."

While Knight has made recruitment and retention a top priority, the assessment team found that the organization "remains generally disengaged" from this mission, with retention numbers dropping consistently over the last decade.

"I think that in an effort to maintain our numbers, we have lowered our standards of discipline and conduct within our unit, as well as moved away from who we are as Green Mountain Boys," one Guard member told the assessment team, invoking the unit's nickname.

The report reveals dysfunction within the Army Guard's Recruiting and Retention Command. It says that between 2015 and 2019, "several noncommissioned officers within this command were engaged in misuse of government vehicles, fraud, adultery, inappropriate relationships, and sexual assault." The report notes that some of these cases are still pending administrative action. During the roundtable, Knight declined to comment on whether any of these officials are facing related criminal charges but said that a new female leader has totally rebuilt the recruiting battalion.

While Knight generally struck a hopeful note in the roundtable, he acknowledged the breadth of documented issues, some of which could take years to fully confront.

"Everything we do here, we should be setting the conditions so the next person who does the job has clear direction and keeps it positive," he said. "Let's shine a light on places that hasn't been shown before, and let's fix it."

The full report is here: