A Near Miss in Montpelier Suggests a Union's Clout Is Waning 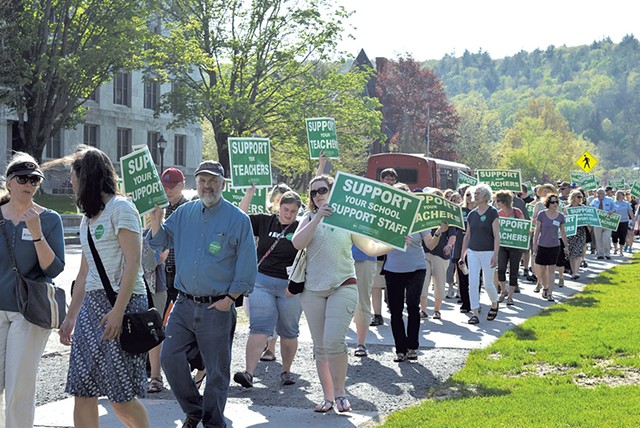 "This is a big concern," she said as she stood on the Statehouse steps in Montpelier. "We're just trying to send a message to legislators that we can bargain at the local level."

Maxfield and the 200 or so teachers, union staff and politicians who rallied last week had been caught off guard. As they protested outside, Democratic leaders — usually so careful to defend teachers' interests — were inside, looking for ways to compromise with Republican Gov. Phil Scott's demand that the state, not local school boards, negotiate teachers' health benefits.

Scott's proposal, which came just weeks before lawmakers were to adjourn for the year, presented the Vermont-National Education Association its biggest political challenge in recent memory. The powerful union found itself on the brink of an unprecedented loss. Sixteen House Democrats voted for Scott's proposal — enough defections that it took a rare vote by the House speaker to defeat a plan the union detests.

By the time lawmakers finally adjourned last week, they had come to the union's defense and held off Scott's plan. However, his promise to veto the budget and tax bills over the issue means this debate will drag on for a month or more.

At the very least, the union's clout appears at risk. Some wonder: What is the future of the long-established alliance between Democrats and unions? The debate suggests a shift, as newer lawmakers feel less urgency for the union cause.

The session started with pushes for a higher minimum wage and paid family leave. Then came the unexpected turn for labor.

The Vermont-NEA found itself playing defense as the first-term governor appealed to the state's property taxpayers. Moving teacher health-benefit negotiations to the state level, Scott claimed, would give Vermonters the most leverage to capture up to $26 million a year in savings from less-expensive plans.

But the Vermont-NEA sees that plan as a threat to teachers' long-standing collective bargaining rights. Health coverage, along with other benefits, should be negotiated between teachers and the school districts that employ them, the Vermont-NEA insists. In the end, Democrats backed away from proposals the union disliked the most but did support a plan to revisit state-level negotiations after a committee studies it.

And it remains unclear whether lawmakers will be able to stick to their commitment to protect collective bargaining following the governor's promised vetoes. Lawmakers, who lack the votes to override a veto, will be back in late June to try again for a compromise.

The union plans more rallies, emails and phone calls in the coming weeks to put human faces into the debate, said Darren Allen, Vermont-NEA spokesman. "Yes, we have a job ahead of us," he conceded. "I'm convinced [that] when our members make their case, lawmakers will listen."

But observers say the union was slow to realize its interests were at risk — allowing the governor to get out in front and sell his plan as one that will save taxpayers' money without eroding teachers' health benefits.

Not until lawmakers were locked in a showdown with the governor last week did union leaders fully activate their members to call and email legislators.

"Everybody thought, This is the state of [U.S. Sen.] Bernie Sanders [I-Vt.]. This could never happen here," said Steve Howard, executive director of the Vermont State Employees Association, which supports the Vermont-NEA's position.

Howard said he worries that any erosion of bargaining rights for one union will spread to others, just as the VSEA is about to negotiate a new contract with the Scott administration.

The matter raised enough concern that Sanders — who rarely gets involved in state issues — came to the union's defense, issuing a message last week in defense of collective bargaining.

Labor activists contend that Scott's plan is part of a national movement. In 2011, Wisconsin restricted the power of public-employee unions to bargain collectively. The idea has been spreading ever since, according to labor leaders.

"I don't think Vermont is immune from the national trend," said David Mickenberg, a lobbyist who represents labor organizations. "There's been a systematic attempt to undermine labor unions."

That approach is gaining a foothold, Mickenberg said, because some GOP leaders are exploiting the steady loss of private-sector unions. As workers lose benefits such as pensions and regular pay raises, they have come to resent government employees who still have those perks.

"It's unfortunate that the dynamic's been created where, somehow, members of the labor union have something other people don't," Mickenberg said.

He and other labor activists argue that the answer is not to reduce public-sector unions' benefits, but to raise them for all working Vermonters.

The argument sounds good, but the reality is that Vermonters feel the gap between the haves and the have-nots, said Senate Minority Leader Dustin Degree (R-Franklin), who supports Scott's plan.

"When you're talking about public unions, those costs are borne by taxpayers," Degree said. "When their benefits are not as robust, they ask honest questions about the role of government ... I think this is a conversation about property taxes."

Rep. David Sharpe (D-Bristol) said he's heard that sentiment clearly in his community. "There's been growing discontent, anger from people who are working hard and not getting ahead," he said.

Sharpe, who chairs the House Education Committee, opposes changes to the health coverage bargaining process, but he does support a step also unlikely to win praise from the Vermont-NEA: decreasing the number of teachers as student enrollment declines. "That's the problem," he said.

The debate highlights the fact that teachers do have more generous health insurance coverage than many Vermonters. Statewide, they pay an average of 15 percent of their premium, while state employees, for example, pay 20 percent.

In fact, Scott's proposal for state-level negotiation is only possible because all Vermont teachers must negotiate new health benefits by January to avoid a federal tax on their current "Cadillac" plans under the federal Affordable Care Act.

The new plans are expected to be less expensive for school districts. The questions of how much cheaper and who should control those savings are at the heart of the debate between Scott and legislators.

That tension has revealed a new world order for the Vermont-NEA: The union can no longer count on the automatic support of Democratic legislators.

As reporters looked on, Johnson explained to labor leaders why the 16 House Democrats earlier this month voted for Scott's plan.

Johnson herself had just released a counterproposal that would have required local negotiations of teacher health contracts to stay within a tight financial range. Vermont-NEA president Martha Allen slammed that as an "anti-worker intrusion into the collective bargaining process."

The Vermont-NEA isn't used to such proposals coming from Democrats in Vermont.

"It's unheard of in my lifetime," said former state representative Tony Klein, a Democrat from East Montpelier and labor supporter. "I'm just really appalled. You have 16 Democrats who aren't really Democrats."

Johnson doesn't see it that way, but she went from union villain to hero in a day. Not long after her cafeteria conversation, she dropped her proposal. The next day, she affirmed that lawmakers would not agree to move bargaining from the local level without first studying the effects.

Johnson contended that she was neither standing up to the union by offering her proposal nor kowtowing by withdrawing it. "You have to put something practical on the table," she said. "The Senate said it went too far for them. We had a House that was divided."

She and Senate leaders settled on a plan to leave bargaining alone while limiting the length of new contracts to two years. In the interim, a panel would study the advisability of a statewide health contract.

Fifteen of the 16 wayward Democrats rejoined the fold to vote for their caucus' plan. Nicole Mace, executive director of the Vermont School Boards Association, said that turnabout indicates how powerful the Vermont-NEA remains.

"My experience in the legislature is that the NEA does have a lot of respect and influence, and it makes it virtually impossible to have substantive conversations about collective bargaining," Mace said.

It appears the union's call to arms in the last few weeks may have worked once again. "Our members have generated over 6,000 emails and 1,000 calls," said Vermont-NEA spokesman Allen. "They're going to continue to do that," he said.

Maxfield, the Brattleboro math teacher, said she was surprised that the debate over collective bargaining had reached this level. Wearing a "Respect" lapel sticker, she said she and her fellow union members are now mobilized.

"An attack on one of us is an attack on all of us," Vermont-NEA president Allen told the cheering crowd.

Some of the once-wayward Democrats said they indeed heard from many teachers in their districts. But they said that their reasons for withdrawing support for Scott's proposal were more nuanced.

Rep. Charlie Kimbell (D-Woodstock) said he found more flaws in the Scott plan as he had more time to scrutinize it, including questions about how much it would save. But Kimbell said he still doesn't consider moving negotiations to the state level as the attack on collective bargaining the union claims.

Rep. Jay Hooper (D-Brookfield) agreed. He switched from supporting the Scott plan because he found the Democratic plan well reasoned. But he makes no guarantees that future votes will be in line with union wishes.

"Old-guard Democrats have a way stronger loyalty to unions," the 23-year-old freshman lawmaker said. "To assume the union is right every time is to forfeit your discretion."

A group of pro-labor lawmakers talked at a lunchtime meeting last week about appealing to their colleagues.

"People do have to be educated about the fact that unions are not people with two heads," Rep. Tom Stevens (D-Waterbury) said.

"I feel like we should have started this a while ago," Rep. Rachael Fields (D-Bennington) told the caucus.

VSEA's Howard warned the group not to assume that the unions won last week, emphasizing that they still face many challenges to workers' rights. "If anybody thinks this is over, it's not," he said.