Montréal Restaurant Átame Feeds More Than One Kind of Appetite 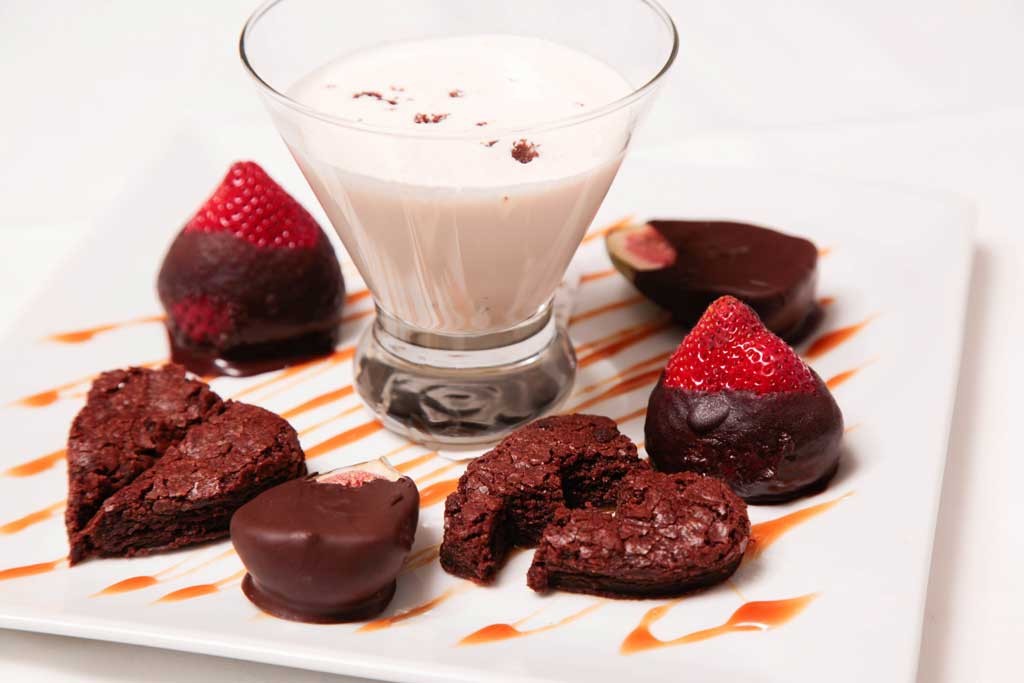 Átame Restaurant Aphrodisiaque debuted last October with a menu by executive chef Athiraj Phrasavath that bore the fruits of Barcelo's research. A restaurant consultant and bartender by trade, Barcelo bills Átame as "the first aphrodisiac restaurant in North America." That's not quite true. A quick Google search reveals restaurants with a similar theme in California and Florida. But Barcelo's concept, executed by chef de cuisine and recent "Chopped Canada" competitor Pat Vasiliauskas, is evidently the first of its kind in Montréal, or Canada.

I've explored the louche side of Montréal dining for Seven Days before, with trips to a topless diner and a free lunchtime buffet at Club Supersexe. At Átame, I was ready for something titillating but a little more refined.

"You're talking about sex; if you don't do it the right way, it could be vulgar, it could be cheesy," Barcelo acknowledges. His goal for the restaurant-cum-cabaret-cum-art gallery is to create a sexy ambience for the over-30 crowd while avoiding those pitfalls.

My boyfriend of 10 years and I waded through the slush of rue Saint-Denis on Valentine's Day weekend to test Barcelo's guarantee: "If you don't get lucky, I'll give you your money back." We were greeted by an extremely muscular host in a too-tight shirt with a tie and skinny suspenders. He looked like a WWE wrestler at a press conference.

The all-white room, plush enough to satisfy the stipulations of J.Lo's concert rider, was filled with couples celebrating the holiday. Many looked 40 or older, though there was a wide mix of ages and races. I was surprised to see that all of the pairings appeared to be hetero.

Átame squeezed nearly 500 people into its dining room on Valentine's Day weekend, according to Barcelo. The new restaurant was an obvious choice then, but can Átame maintain the traffic? "It sounds lame, but it's Valentine's every weekend [here]," says Barcelo, who is well aware that he is walking a fine line between hot destination and punch line. "We tell the servers, 'Keep in mind that these people are having a very special night. Keep in mind it's none of your business, but these people are going to be making love two hours from now.'"

Was that what my server was thinking about me? More comfortable with French than my boyfriend, James, I did all the ordering from the four-course prix-fixe menu that Átame offered that weekend instead of its regular bill of fare. That meant I was stuck telling our petite waitress that I wanted Je Te Mangerais Tout Cru (I'll eat you raw) and Euphorie de la Chair (ecstasy of the flesh), actually beef carpaccio and a faux-filet in pomegranate sauce, respectively. When it came to asking for Entre Mes Cuisses (between my thighs), I couldn't help but giggle. "It's fun to say, non?" asked the server in English.

She was right. But I wasn't turned on yet. Neither was James. He said he was at "about a four" on a scale of one to 10.

Things improved a bit when Marc-André Gautier took to the tiny stage just behind us. To cater to couples, Barcelo had replaced the usual burlesque entertainment with musicians. If talent is a turn-on, then the floppy-haired former child prodigy lit the room's collective nether regions ablaze with his virtuoso violin work.

Freshly cooked taro chips tossed in lightly spicy togarashi made me feel something, though it was more on my tongue than dans mes culottes — which would be a great name for a dish at Átame.

The next course did the job better. The dish described as beef carpaccio was actually seared slices of flavorful meat coated with crushed, vanilla-scented tonka beans and cacao, then topped with microgreens. The three corners of the plate contained tiny piles of molecular Dijon "caviar"; Parmesan; and a sweet reduction of French shallots in white wine and honey, respectively. A dark swirl of Cabernet reduction dressed the whole plate. Was it sexy? I've always admitted that the smell of rendering tallow gets me going, so biting into beef and tasting the hint of animal musk was a little closer to the goal.

By that time, singer Shy Shy Schullie had taken the stage. The plump cabaret chanteuse sang in English with a pleasant purr, but I couldn't help but fall prey to a giggling fit when she began lasciviously intoning "Chim Chim Cher-ee" from Mary Poppins. How did that sweep get so lucky? Maybe he ordered Entre Mes Cuisses.

I love a nicely braised bite of chicken as much as (or probably more than) the next gal, but poultry isn't one of my top turn-ons. So the chicken leg-and-thigh dish with that enticing name had to surmount hurdles to get me hot and bothered. Its chocolate sauce was delicious but ultra-thick.

The heart-shaped steak earned its "fleshy ecstasy" name, though the tiny faux-filet was cooked to an unsexy medium-well. The touch of truffle lent a lingering roundness to the acidic wine-and-pomegranate sauce that dressed the meat. Tender carrots, mushrooms and crunchy chunks of potato made for a hearty dish, but it evoked a cold winter evening more than a torrid nighttime rendezvous.

Maybe it was our exhausting lunch of all-you-can-eat Korean barbecue, but James and I seemed to be riding the seduction short bus. A couple across the room had moved from holding hands to a full-on make-out session. Apparently, they hadn't had the foresight to reserve one of Átame's two private rooms, located in mirrored stalls near the bar.

Servers always knock at those doors before bringing the next course, Barcelo assures, and they've experienced some long waits. Since the private space is limited, he says he's currently making sure there are no regulations that could stymie his goal to add a third "love bathroom."

For now, Barcelo says, he won't stop couples from having sex or making out in private areas. According to local laws, as long as Átame doesn't promote or show the private moments, anything goes, he says. "Boudoir" performances and Fifty Shades of Grey theme nights satisfy diners with a more voyeuristic eye. Bondage gear isn't out of place at Átame, given that Argentina native Barcelo named the restaurant after his favorite movie, Pedro Almodóvar's Tie Me Up, Tie Me Down (called simply Átame!, or "tie me up" in Spanish).

We wound down our meal with a plate of not-too-heavy sweets. A chocolate-dipped fig and strawberry for each of us accompanied a single chewy chocolate brownie topped in salted caramel. On the side, a fruity Amarula milkshake provided both a dip for the chocolate treats and a cool sip on its own.

At $55 a head for the prix-fixe, we'd decided to skip cocktails. It was probably a bad decision. The Sultry Old-Fashioned might have done the trick with its combination of cucumber-flavored Hendrick's Gin, chai syrup, pineapple-and-orange bitters and cinnamon, along with a dose of herbal remedy tribulus terrestris.

Instead, we ended the evening by getting hot chocolate to sip in bed back at our hotel room. Despite my wardrobe by La Perla and the meal at Átame, Korean barbecue and a stressful week proved too much for James. He was asleep moments after he hit the mattress. But I won't ask for my money back. Dinner was satisfying, even if I didn't get lucky.