A Modern House of Worship, a Classical Music Venue 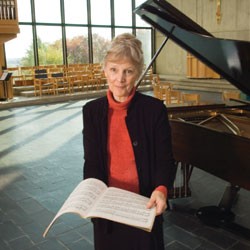 It’s rehearsal time for pianist Elaine Greenfield on a recent afternoon at the Cathedral Church of St. Paul. As the ethereal, superhumanly quick runs of a Debussy piece fill the church’s airy nave, sunlight filters through a south-facing curtain wall of windows, lighting up one of Burlington’s best classical-music performance spaces.

Yes, it’s an Episcopal church. Unusually, however, St. Paul’s was built specifically to accommodate arts performances as well as weekly services. The 1973 design has some serious modernist cred: According to architectural historian Devin Colman at the Vermont Divison for Historic Preservation, local architects William Henderson and Tom Cullins of Burlington Associates won the American Institute of Architects anonymous-submission design competition over, among others, Marcel Breuer — who had taught at the Bauhaus in Germany in the 1920s. (Cullins and one of the judges, William Truex, went on to found the Burlington firm TruexCullins.)

St. Paul’s redoubtable exterior — whose masses of light-gray concrete blocks and darkened window panels reduce the iconic elements of the Western cathedral to their purest, most rectilinear forms — gives little clue to the soaring space inside. Chairs, rather than pews, allow unlimited configurations on the cubic space’s vast slate floor. The unmodified concrete walls create a clean backdrop broken only by a mix of religious and abstract paintings hung at eye level and one wall’s inset, angled blocks of sound-tempering wood. (The latter resemble those in the University of Vermont’s Music Building, also designed by Burlington Associates in 1973.) High overhead, a flat, coffered-concrete ceiling is flanked by corridor-like skylights that let in even more sun.

Greenfield, a petite 67-year-old, is practicing for a concert in the church’s Evening/Weekend Series — which, along with the free Tuesday Noon to One Series, makes up Cathedral Arts, St. Paul’s classical-music programming for the public. Her delicate white updo notwithstanding, Greenfield has just ousted the organist from his perch with purposeful efficiency and pushed the church’s wheeled Steinway concert grand to the center of the floor, unceremoniously bunching up its quilted cover on a nearby chair. She is all business, and appropriately so: Greenfield started Cathedral Arts in the mid-1970s, only a couple years after the church opened, and has served as its dedicated artistic director ever since.

“People at the church have always been really supportive of using the space for the arts,” the South Burlington-based professional piano teacher and soloist affirms, adding that the venue once hosted plays such as The Crucible and continues to serve as an exhibition space for local art. When Greenfield proposed in 1986 that the church acquire and refurbish its 1920s piano — not a small undertaking — the administration agreed to split the cost with Greenfield Piano Associates, the pianist’s membership organization for students and supporters.

Does she remember how the nearly new building first struck her in the mid-’70s? “Modern,” she says after a moment, with a laugh. She describes its acoustics as “live” due to the abundance of hard surfaces, and adds, “I think it enhances the sound.”

Greenfield, who trained at the State University of New York’s Crane School of Music and the Peabody Institute of the Johns Hopkins University, is particularly attuned to the nuances of sound. For the latest of three CDs she recorded with Arizona-based pianist Janice Meyer Thompson — the two perform four-handed piano around the country as the Transcontinental Piano Duo — Greenfield played an 1878 French-made Erard held in the Frederick Historic Piano Collection in Ashburnham, Mass. Unlike modern pianos, which “sound uniform from one end to the other,” she says, the historical instrument had “unique sounds in each register ... a texturing of sounds.” The experience changed her approach to playing: “It affects the way you play because of what it’s done to your imagination. It makes what you do in each register very different, dynamically. It informs you.”

Greenfield will play Messiaen, Debussy and Ravel during the first half of her upcoming concert. The second half is a duo performance with Grammy-nominated flutist Karen Kevra, the artistic director of Capital City Concerts in Montpelier.

Other events in this year’s ticketed Evening/Weekend Series include the New York-based ensemble Repast performing selections from a French baroque opera, a Bach organ recital, and a choral concert by Counterpoint.

While the ticketed concerts at St. Paul’s may be less well known than, say, the University of Vermont’s Lane Series, they are of equally high caliber, says Martin Poppe, manager of Cathedral Arts’ publicity and sales.

And it’s oddly fitting to hear classical music — an art that originated in the medieval Christian church and gradually went secular — in a secular performance space that doubles as a church. How much more transporting can it get?

Pianist Elaine Greenfield performs with flutist Karen Kevra at the Cathedral Church of St. Paul, at the corner of Pearl and Battery streets in Burlington, on Friday, October 29, at 7:30 p.m. General admission, $20; seniors and students, $15; ages 15 and younger are free. www.stpaulscathedralvt.org