Most people plug in a guitar amplifier to strum some chords or noodle a few jazz and rock licks. Gregory Pask turns on his guitar amp to hear neurons firing in the brain of a fruit fly that's been genetically altered to smell ant pheromones.

"I get asked a lot whether insects even have brains, which is somewhat of a failing of our [country's] biological education," said Pask, an insect neurobiologist and assistant professor of biology at Middlebury College. "There are a million [identified] insect species out there ... but they often get thrown aside for the warm and fuzzy vertebrates."

In a third-floor laboratory in Middlebury's McCardell Bicentennial Hall, Pask, 36, and his team conduct cutting-edge research on fireflies and other insect species. Starting with his graduate work at Vanderbilt University in Nashville, Tenn., where he earned a doctorate in biological sciences in 2013, Pask has studied the perfect trifecta of summer bugs: fireflies, ants and mosquitoes.

On the Middlebury faculty since 2020, Pask is an expert on insect olfactory systems — the primary means by which insects navigate the world. Smell enables them to locate food, spot places to lay eggs, identify enemies or prey, and, most importantly, find mates.

Take the winter firefly, native to Vermont, which is neither a true fly nor one that glows. Pask's recent, groundbreaking discovery of a winter firefly pheromone — the first ever identified in a firefly species — offers new insights into how this and other firefly species evolved without the ability to communicate visually by glowing.

Such research not only advances our basic scientific understanding of insect biology, Pask said, but also helps us develop new methods of pest management.

To show where the research begins, Pask entered a locked room that resembled a walk-in freezer. Inside were about a dozen clear plastic cubes called nesting boxes, each approximately the size of a cantaloupe. In each box was a small colony of Indian jumping ants, a species native to western India but not to the U.S. — hence the need for an airtight containment room with screens on its vents to prevent the inch-long ants from escaping.

Pask and his team chose this type of ant because of its simplicity. More evolutionarily advanced species, such as leaf-cutter ants, have highly complex colonies with multiple castes of workers and millions of individuals performing specialized functions, from waging war to cultivating food.

Pask has studied the perfect trifecta of summer bugs: fireflies, ants and mosquitoes. tweet this

By contrast, Pask explained, the Indian jumping ant displays one of evolution's earliest forms of ant social living. The species lives in small colonies — from 15 to 200 individuals — with just one worker caste performing multiple jobs.

"If we want to understand how ants are communicating with each other," Pask said, "it's great to start at the beginning."

The Indian jumping ant is especially well suited for study, he noted, because scientists have sequenced its genome — Pask was a member of the team that did so — and can now extract genes of interest and study them in isolation.

One of the questions Pask and his students are trying to answer is how ants use pheromones to know when a worker is trying to become the new "reproductive," or queen. Ordinarily, a new reproductive will be eliminated by her fellow workers, who bite her and eat her eggs to prevent her from reproducing. (All ant workers are female.) However, if the colony gets too large, a "gamergate," or pseudo-queen, may emerge.

Genetically speaking, Pask said, "The colonies are immortal. If the queen dies, the workers have this big, ritualistic duel where, when one worker wins, it becomes the new reproductive and carries on the egg laying."

What does all of this have to do with understanding the ants' sense of smell? Pask and his team have found a way to extract the queen's pheromone and, in effect, create a mock queen, he explained. They're currently studying how introducing one of these mock queens into a colony affects the ants' response.

The researchers coat a glass bead with the queen pheromone, then, using tiny video cameras, watch how the workers behave. Assuming their theory is correct, in a colony with an untreated control bead, one of the workers will become a gamergate and lay eggs. In a colony with a pheromone-treated bead and the queen absent, no throne usurper will develop.

Central to understanding this process are the ants' olfactory organs, which are located in their antennal hairs and resemble the eye of a needle. They're so sensitive that an ant can tell whether an approaching ant is friend or foe based solely on the number and position of carbon atoms in its pheromone molecules.

Here's where the fruit flies come into play. Because ants' nervous systems are more complex than those of fruit flies, it's easier to understand the former by watching them work inside the latter. 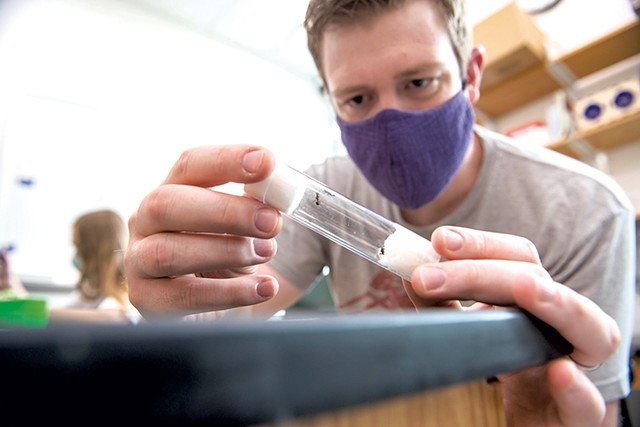 Researchers have isolated the ant gene responsible for growing a pheromone receptor and inserted that gene into fruit flies. Pask and his students put one such modified fruit fly under a microscope and attach electrodes to its brain. Then they puff different chemicals, including the pheromone, onto its antennae and listen for which ones activate its nervous system.

And Pask means literally listen. A normal fruit fly won't respond to an ant pheromone, but the genetically altered ones do. When the ant pheromone hits the fly's antenna, its neurons fire in rapid pulses, which are audible on the guitar amp as soft popping sounds. Such findings help researchers better understand the role that ants' olfactory organs play in their social interactions.

Needless to say, such research requires an exceedingly clean and sensitive laboratory environment to prevent chemical cross contamination and electrical interference. Each of the two workstations in Pask's lab, which cost about $60,000 apiece, is housed in a metal Faraday cage that blocks electromagnetic interference, allowing for ultraprecise measurements.

"I never considered myself an insect person until I was leaving my graduate program," said Pask, who grew up in Cape May, N.J. After earning his bachelor's degree in biochemistry at Muhlenberg College in Allentown, Pa., he landed in a mosquito olfaction lab at Vanderbilt.

There, funded by a grant from the Bill & Melinda Gates Foundation, Pask and his fellow researchers figured out how to manipulate the sense of smell in the Anopheles gambiae mosquito, which carries malaria. Their goal was to disrupt the mosquitoes' ability to find hosts; such research may eventually prove useful in developing new mosquito repellents.

These days, Pask's Middlebury lab, which is funded in part by the National Science Foundation, studies other insects, including that Vermont native winter firefly. After millions of years of evolution, Pask explained, the adult of this species has lost its ability to glow, though the larvae and pupae can still light up. Unlike other species of fireflies — or lightning bugs, as they're known in some regions of the country — winter fireflies are diurnal, or active during the day.

Because most fireflies use their bioluminescent flash patterns to locate and attract mates, Pask wanted to know: How do winter fireflies pair up without a light organ?

Recently, researchers at his lab found the answer when they discovered the first pheromone ever identified in a firefly species, of which there are more than 2,000 worldwide. Because he and his collaborators at Bucknell University have yet to publish a paper on their findings, Pask was a bit cagey about sharing the details. However, he did say the winter firefly's sex pheromone, which is produced by the female, appears to be powerful.

"We'd be setting these [traps] up, and my students would have a bunch of male fireflies flying around them within seconds after taking them out," he said. "So it's pretty potent stuff."

Pask's research and teaching on the chemical language of insects have already impressed his students and fellow Middlebury faculty. After just two years at the college, Pask received the 2022 Perkins Award for Excellence in Teaching. In alternating years, it's given to a faculty member in mathematics or the computer sciences, or to one in the natural sciences.

"Greg has already made quite a mark on students through his commitment and dedication to teaching excellence in the spirit of Professor Llewellyn Perkins," wrote associate dean of sciences Rick Bunt in a May statement, referring to a professor who taught at Middlebury from 1914 to 1941.

Pask, who maintains an active presence on Twitter, thinks the winter firefly should replace the honeybee as Vermont's official state insect — and he makes a compelling case. Besides being the official insect of 18 other states, the honeybee isn't even native to the Green Mountain State.

The winter firefly, by contrast, emerges in late summer and fall, tucks itself into the bark of trees and, like a hearty Vermonter, rides out the cold. In fact, Pask noted, winter fireflies are known to be active on warm days in February and March, occasionally turning up in maple sugaring buckets.

The winter firefly proves its hardiness in other ways, too. Known for its hard outer wings, called "elytra," it displays bright colors that deter predators. Its body contains a defensive steroid called lucibufagin, which is so toxic and unpalatable, Pask noted, that spiders will cut winter fireflies out of their webs rather than eat them.

It's a good idea for humans to avoid ingesting them, too. Pask estimated that just five winter fireflies contain enough lucibufagin to stop a human heart. One can imagine some creative Vermont novelist incorporating that ingeniously lethal weapon into a local murder mystery.

Pask admitted that getting the winter firefly to replace the honeybee as Vermont's state insect would be an uphill battle. When asked whether Vermonters would rally behind a firefly that comes out during the day, isn't as flashy as its nocturnal cousins and has homicidal potential, Pask offered an answer worthy of a campaign bumper sticker: "Embrace the dark side."

The original print version of this article was headlined "Ant Man"