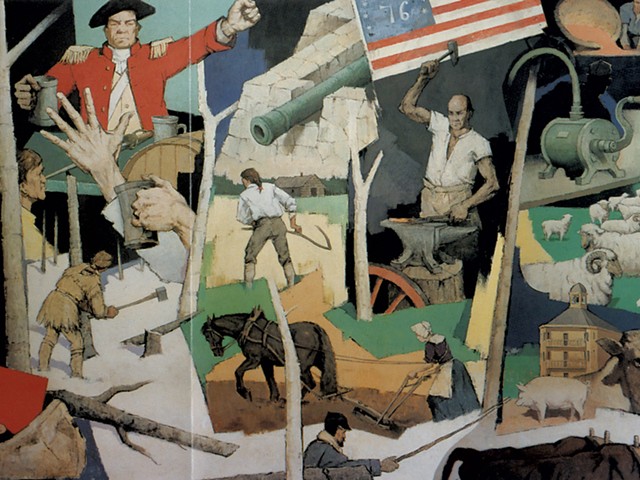 Next week, a 50-foot-long canvas mural commissioned in 1958 will become the crown jewel of the Vermont History Museum.

The painting, titled "Tribute to Vermont," depicts 350 years of state history in small vignettes separated by trees, a smokestack and other vertical elements spanning its eight-foot height. The artist was Paul Sample, then the first artist in residence at Dartmouth College, and his work was created for the marble-clad lobby of National Life of Vermont's brand-new headquarters in Montpelier.

Until now, only employees and visitors passing between the elevators and the cafeteria of the renamed National Life Group could enjoy this celebratory montage. Over the next week, the Vermont Historical Society will install the mural at the museum's Pavilion Building, just a few steps from the Statehouse, for the public to enjoy. And viewing it will be free: The museum's ticket counter will be placed beyond the mural installation.

The VHS, which is headquartered in Barre but focuses on exhibits at the Montpelier site, is transforming the museum's interior for the occasion. On a recent visit, while workers laid new carpeting, executive director Steve Perkins showed a reporter the new configuration. It includes glass windows on the entry door to let in more natural light; a planned "cabinet of curiosities" in the entry niche; and a large room beyond that, formerly a gift shop, that will hold the mural and exhibits about its creator and the project. Gone are a glass wall and an imposing desk, elements that Perkins deemed "too corporate" after his hiring last year.

Architects from Bread Loaf Corporation in Middlebury built a 54-foot curving wall for the mural. When the painting is installed, its leftmost portion, depicting Samuel de Champlain overlooking his namesake lake, will be visible on entering.

Perkins plans to redo the museum's "Freedom and Unity" exhibit, in place since 2004, to reflect questions raised by the mural. "This was a white man's view of Vermont history in the 1950s," he said, pointing out that, for Sample and his client, state history began with the French explorer in 1609. The new exhibit will discuss the Abenaki nation more thoroughly, and in present tense rather than past, among other changes.

A display devised by Shadows and Light Design of North Ferrisburgh will allow visitors to answer prompts on whiteboards about what it means to them to be a Vermonter, and then to pose for photos holding their replies. These images will appear in a three-screen digital montage that is intended to continue Sample's history of the state into the present — and the future.

Painting conservator Emily Phillips, of Phillips Art Conservation Studio in Essex, N.Y., oversaw the mural's removal in September and storage in two enormous, Tyvek-lined rolls — Sample created the mural on two 25-foot canvases. Phillips plans to unroll and mount the painting one section per day, vacuuming old adhesive residue as she goes. The mural will open to the public on Wednesday, February 8. (The refurbished "Freedom" exhibit will open on April 28.)

Conservation work will continue for the rest of February in view of visitors, said Phillips, with surface cleaning and localized paint infill in damaged areas. She noted that the Sample painting is in surprisingly good shape, despite the stress of removal, because the artist used good linen canvas and high-quality acrylic paint.

Phillips cut her conservator's teeth doing pre-graduate volunteer work at Shelburne Museum and with Chris Hadsel on the Vermont Theater Curtain Project (now Curtains Without Borders). The conservator has restored an 1870s John La Farge mural in Boston's Trinity Church and William Earle's 1956-60 murals at Norwich University, among other mural projects. She did a condition assessment of National Life's portrait collection in 2010.

Phillips was struck during the removal process by Sample's flair for "jam-packing in the scenes" and by his use of hands, which receive several outsize depictions. One, a hand hoisting a beer mug in salute to Ethan Allen, may look prescient to fans of the current craft-beer craze.

Many corporations in the '50s and '60s touted their success with grand lobby murals, he added, but he knows of no others that depict the history of the state in which the corporation was headquartered. Standing beside the original installation wall, which now displays a photography exhibit, Colman questioned the wisdom of removing a site-specific work from its historical context.

According to Ross Sneyd, who heads corporate relations at National Life, the mural couldn't remain in place after conservation because bus exhaust and outside air would continue to enter through the lobby doors and damage it. The company is paying for all moving, conservation and reinstallation work.

This way, said Sneyd, the mural will be in the middle of downtown, and its subject is exactly what the Vermont History Museum is all about.