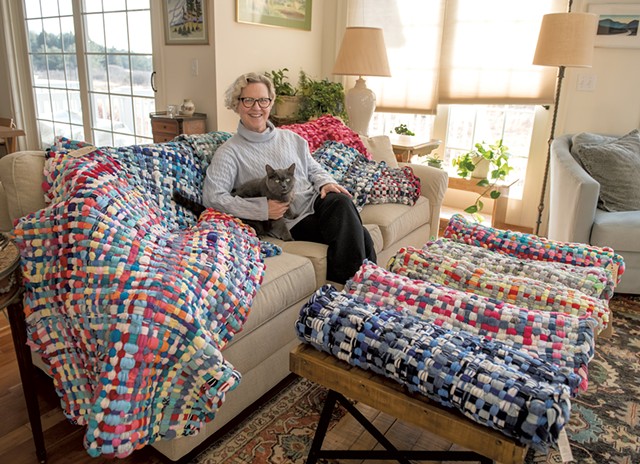 The beige sweater didn't look much like an old rag until Julie Reville put it on the table and shredded it, using a rotary cutter as if she were slicing up a pizza pie. Cutting the garment into two- to three-inch-wide strips created stretchy loops of fabric, which Reville knotted into a chain. She wove the loops horizontally across a loom that her husband, Dave, built out of two-by-fours and a few dozen wood screws.

"You stretch them really tight until you get the whole frame filled," Reville explained. "It's all connected, so it's hard for them to become unraveled."

It takes Reville about three hours to turn a five-pound bag of discarded clothing — sweats, socks, T-shirts, leggings — into a 2-by-3-foot "potholder rug," as she calls her final products. Under the business name JBirdStudioVT, she sells her rugs for $75 to $125 on Etsy and at Thirty-odd, the artist emporium in Burlington's South End.

"There's a certain history in the items woven in. It's like giving them a second life." Julie Reville tweet this

Reville, who turns 65 this month, isn't an artist by profession. A licensed clinical mental health counselor in South Burlington, she's been in private practice since 2006, treating teens and adults, most of whom have obsessive-compulsive disorders.

Her crafting sideline is less about paying the bills than about doing something meditative in her off-hours. In the process, Reville hopes to help reduce the amount of textile waste that ends up in Vermont's landfill.

Even before COVID-19, Reville said, she was seeing many of her patients remotely, including some whose conditions were so severe that they could barely leave their homes.

Like many of her colleagues in the mental health field, however, she's seen her work become even more intense and stressful over the last two years. The pandemic seemed to confirm many of her clients' worst fears, she explained, especially those who suffer from contamination OCD, a condition characterized by an obsession with contracting an illness or spreading germs. Intrusive thoughts can cause affected people severe anxiety and distress, which they try to alleviate through compulsive behaviors such as excessive handwashing and avoiding crowds.

As her work went fully remote for all of her clients, Reville searched for new ways to decompress in her downtime. "Part of being a good counselor is self-care and doing the things that help you stay centered," she said. "For me, working with my hands has been really helpful and meditative."

A longtime crafter who previously worked in ceramics and glass, Reville discovered an online seminar hosted by Crispina ffrench, a Becket, Mass.-based artist who does not capitalize her last name. An "environmental optimist and textile alchemist," as she describes herself online, ffrench has worked with large retailers, such as Patagonia, Eileen Fisher, Timberland and Crate & Barrel to upcycle manufacturing waste and discarded clothing into more valuable products. In recent years, she has helped other budding crafters launch their own upcycling businesses.

"I decided I really want to do that," Reville said.

After taking ffrench's seminar in 2020, she posted a request on Front Porch Forum for her neighbors' unwanted garments. It didn't matter to her whether the clothes were stained, ripped, discolored or moth-eaten; she could simply cut around the parts she didn't want.

"The key is, it has to be stretchy," Reville said. Linen and cotton don't make good materials for these rugs.

Reville was surprised when nine people immediately responded with offers to leave bags of clothing on their porches. One woman gave her a sack of cashmere sweaters that had belonged to her husband and were still in good condition.

Another woman gave Reville a bag of her daughter's old soccer jerseys, which she had been saving to make a quilt. The daughter had no interest in a quilt, however, so Reville transformed the jerseys into a throw rug, which she likened to a scrapbook of the girl's wardrobe over the years.

"There's a certain history in the items woven in," she said. "It's like giving them a second life."

Reville started trawling tag sales and consignment shops, especially at the end of the season when retailers rotate their stock. One of her favorite haunts, she said, is Battery Street Jeans, where she often goes through the free box, especially when she's looking for particular colors.

Some consignment stores charge her by the bag. "Otherwise, they're just going into the landfill," she said.

There's no shortage of old fabrics, including clothes, sheets and pillowcases, that need repurposing. According to the U.S. Environmental Protection Agency, of the 17 million tons of textiles that landed in the U.S. municipal solid waste stream in 2018, only 2.5 million, or 14.7 percent, were recycled. The rest were landfilled or incinerated.

By contrast, nearly one-third of all glass containers were recycled in 2018, as were more than half of all aluminum cans.

"I'd never done anything like this before, but I find it very rewarding," Reville said. "Things get thrown away all the time that have so much value."

Part of the value of upcycled fabrics is their durability. The first rug Reville ever made sits on her bathroom floor. About an inch thick, it's soft and knobby where she tied the knots. When it needs to be cleaned, she just throws it in the washing machine — though Reville admitted that the thick rug can take a while to dry.

Though JBirdStudioVT is in its early stages, Reville has accumulated bins of T-shirts, sweaters and leggings that she's sorted by color. She's willing to do custom work for customers who want specific color schemes.

Reville and her husband plan to retire later this year. After that, she said, she'll throw herself into the throw rugs, both as a hobby and for her mental health.

"Doing crafts is really helpful for just being calm and present and not being bombarded by the TV and phones," she said. "I can see myself just working [with] my hands instead of listening [to clients] all day."