A Matter of Degrees: UVM Nurses Bargain to Study in Vermont 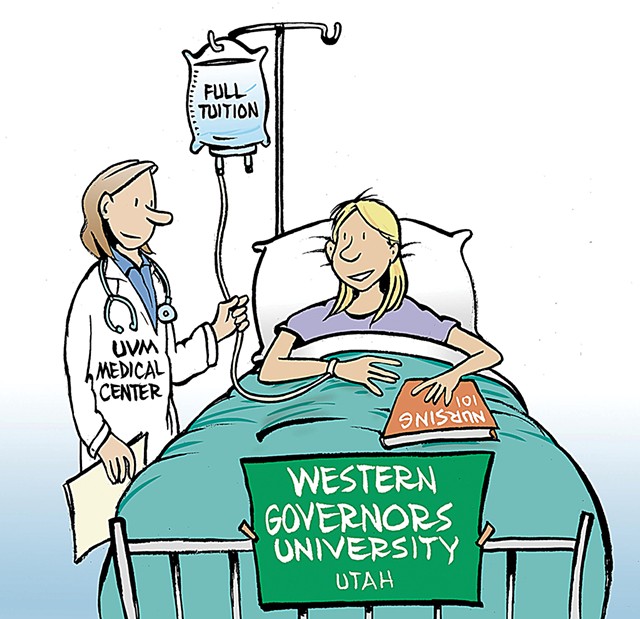 When the University of Vermont Medical Center sends its nurses back to school for continuing education, they don't have to go far. UVM's College of Nursing and Health Sciences is right next door.

Instead, 104 registered nurses at the hospital are enrolled in a bachelor's degree program headquartered thousands of miles away — at the Salt Lake City, Utah-based Western Governors University. It's the only course of study for which the Vermont medical center pays the entire cost of tuition.

The hospital likes the WGU program because it's cheap, flexible and can be completed quickly. For example, it will allow emergency room nurses Matt Looft and Abigail Garrett to earn bachelor's degrees — for free — in about 18 months while they continue to work full time, operate their family farm and raise two young children.

"It's a means to an end," Looft said. Both he and Garrett are starting school on September 1.

But some nurses worry the arrangement with the online college steers students away from existing health education programs in Vermont that are threatened by declining enrollment. They're also concerned WGU's academics are not rigorous enough to qualify them for further education.

The medical center's deal with WGU is part of the ongoing negotiations between the hospital and 1,800 nurses who have been working without a contract since July 9. In addition to better pay and lower nurse-patient ratios, the Vermont Federation of Nurses & Health Professionals is pushing for a more Vermont-friendly tuition reimbursement program.

Its message to the hospital? Spend locally. "Why aren't we investing in-state?" asked Deb Snell, an emergency room nurse and the union's executive vice president.

Looft agreed: "I'd prefer to have my degree come from UVM. I'd love for those dollars to be invested there." But, he added, the price tag — or lack thereof — ultimately won him over. "I'm not so much of a conscientious objector that I'm going to say, 'No, no, no. I'm not going to take your degree,'" he said.

A registered nurse needs either a two-year associate's degree or a four-year bachelor's, but UVM Medical Center increasingly prefers the latter. Last year, the hospital announced that it would prioritize hiring RNs with bachelor's degrees. All existing employees are being encouraged to get the additional education.

One reason: The hospital is seeking national "Magnet" status from the American Nurses Credentialing Center for its quality of care. To make the grade, the medical center must provide proof of its effort to help 80 percent of the hospital's working nurses earn bachelor's degrees by 2020. Currently, about 60 percent have those academic credentials.

Just last year, the nurses' union and the hospital agreed on a program for "clinical advancement" in which the medical center would pay 100 percent of the tuition to WGU. Alternatively, it would contribute $2,600 annually for nurses with up to five years on the job to pursue degree programs somewhere else, according to union president Laurie Aunchman. More experienced nurses receive a larger amount — roughly $3,950 a year.

Aunchman recalled meeting with Kate FitzPatrick, the chief nursing officer for UVM Medical Center who oversees the program with WGU. Although Aunchman acknowledged the hospital's generosity — "I don't know of a lot of institutions that offer 100 percent tuition reimbursement," she said — she also remembered asking FitzPatrick: "Why aren't we using UVM? Why aren't we using our state colleges?"

In the past year, 42 nurses have used UVM Medical Center's tuition reimbursement to attend various in-state schools, said hospital spokesperson Michael Carrese. FitzPatrick was on vacation last week and did not return messages from Seven Days.

The first UVM students enrolled in WGU last November. The private, nonprofit online university was founded 20 years before that. The idea — to create a flexible, affordable program that would give students practical skills for the job market — was hatched in a 1995 meeting of the Western Governors' Association.

The school's model defies many of the mores of higher education.

There are no professors, per se. "Instructors" teach online classes, while "evaluators" grade their tests. Each student is paired with a "mentor," a role Looft described as "part academic adviser and part cheerleader and part taskmaster."

In "competency-based learning," the goal is to master the material — a pass-or-fail proposition, according to Jan Jones-Schenk, WGU's chief nursing officer. Students take a test to gauge their proficiency levels and proceed at their own pace. They can enroll in as many classes as desired during a six-month period for $3,190, plus about $300 in fees.

Comparatively, a semester at UVM's College of Nursing and Health Sciences is nearly double WGU's price tag, depending on the number of credits earned, said department chair Rosemary Dale. Medical center nurses do get a 10 percent tuition discount, she explained, but the hospital's contribution doesn't fully cover the cost of the degree, which is usually about $16,000 over five semesters.

A total of 40 nursing students are enrolled at UVM this fall — down from about 80 in previous years, Dale said. "They've cut our program in half," she said of WGU's impact on UVM nursing. "We UVM faculty think it's most unfortunate that we are not the primary partner for UVMMC nurses as they move to complete their bachelor's education. We have had a long partnership, and no one has said the program we offer is not the highest quality or that the university has not been flexible in accommodating their needs."

Meanwhile, enrollment at the online school has skyrocketed over the last two decades, said Jones-Schenk. About 16,000 students across the country are in the process of earning bachelor's degrees in nursing, she said. A total of 91,000 students were studying something at WGU in 2017.

"They have no building, no faculty, no library, no research," Dale said. "It's really a very, very different setup." Adding that she couldn't speak to the quality of the WGU program, Dale noted that UVM offers "a certain amount of intellectual rigor."

Vermont State Colleges System Chancellor Jeb Spaulding said he learned of the medical center's agreement with WGU when a union representative contacted him in May.

Both Castleton University and Vermont Technical College have online programs for nurses seeking bachelor's degrees, Spaulding noted in an email to Seven Days. "UVM nurses would be eligible for in-state tuition. Each college would welcome an opportunity to work with the UVM Medical Center to provide nursing education and to fill other workforce needs."

"When we look at the very large universities, these big online programs, they're just able in some respects to offer a lot more bells and whistles than those of us who are in the brick-and-mortar businesses are able to provide," said Havener.

As UVM's Dale put it: "Most, if not all, programs are suffering because of the advent of programs like Western Governors."

Some nurses and administrators also worry that the WGU degree may not be sufficient for students who want to pursue advanced degrees. A "pass" grade translates to a 3.0 grade point average — a B. That's not good enough to earn admission into some competitive master's programs, said Snell.

"We're very concerned about that, and we follow that," acknowledged Jones-Schenk, adding that many WGU grads get into graduate schools.

She defended the school's approach. "There's not a good understanding of what competency-based learning is," she said.In fact, the federal government has been asking some tough questions about it. Last year, the national Office of Inspector General audited WGU and determined the school did not meet the U.S. Department of Education's requirements for "distance education" and should not be eligible for federal funding.

Noting that the courses lacked "regular and substantive interaction between students and instructors," the government's report recommended that the school pay back $713 million in federal aid.

WGU administrators have been providing information to the Department of Education, but the feds haven't yet made a final ruling, according to the school's vice president of public relations, Joan Mitchell.

UVM Medical Center administrators who oversee the partnership with WGU were not available for interviews, but Carrese sent an emailed statement to Seven Days noting that the hospital was proud of the program in place.

"A committee of nurses and others selected WGU for a one-year pilot because it was a high-quality program that met the needs of nurses who wanted a competency-based curriculum they could do at their own pace," the statement read. "It was also recommended by staff members who were WGU graduates."

Besides WGU, the statement continued, "we also arrange for reduced tuition with various local and national programs to give our staff as many choices as possible to meet their individual educational needs."

The contract with WGU officially ended when the nurses' contract expired in July. But that doesn't appear to have jeopardized the relationship between UVM Medical Center and the school. The nurses' union expects the arrangement to continue, even after the two sides settle on a new contract.

The union is proposing that the hospital cover up to $5,000 for annual tuition at nursing schools other than WGU — nearly double the current amount, said Aunchman. "We want to continue with 100 percent tuition for our nurses who want to go back to school," she said. "Right now, we're trying to get as much tuition assistance on the table as possible."

The medical center has agreed to participate in a health care summit this fall focusing on nursing education, she added.

"I think we're moving in the right direction," Aunchman said.

At least one nurse doesn't plan on attending WGU. Snell, who's worked at the hospital since 1999, has her associate's degree, but she isn't getting a bachelor's degree yet.