A Lyrically Inspired Not-Quite-Interview with the Decemberists' Colin Meloy 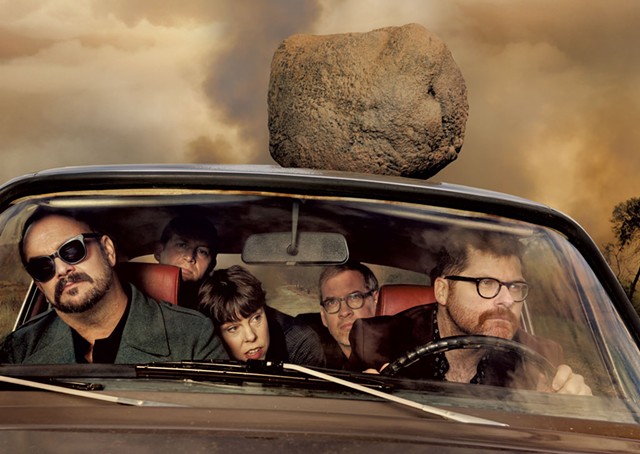 The Decemberists' front man and primary songwriter, Colin Meloy, is known for his verbosity. He frequently references arcane folklore and literary figures and concocts richly drawn characters, including wayfarers, peddlers, prostitutes and murderers. The Portland, Ore., group's narrative songs often include vocabulary words no one has seen or used since preparing for the verbal section of the SATs. For the literarily inclined, the Decemberists are a perfect match.

But on the group's eighth studio album, I'll Be Your Girl, Meloy decided to scale back his loquacious tendencies. Speaking with the Atlantic's Spencer Kornhaber in March, Meloy said, "I've become a better editor as I've gotten older. I look back at some of the early records and sometimes I wonder if that songwriter could have used an editor, getting rid of a verse here and there.

"This record was an effort to challenge myself and create something that felt fresher," he continued. Beyond the album's starker, streamlined lyrics, the group amplifies its trademark folk-ish, indie-rock sound with heavy use of zestful synthesizers and an eye toward dance music. The songwriter even refers to the record as an "apocalyptic dance party."

Meloy is also known for his young-adult novels: the Wildwood Chronicles, a three-book fantasy epic; and the more recent The Whiz Mob and the Grenadine Kid, a caper involving a cadre of child thieves.

The Decemberists perform on Saturday, June 9, at the Shelburne Museum. M. Ward opens. After two failed attempts to interview Meloy — by phone and through email — Seven Days was ultimately unable to connect with him. We would have asked him about the new album's subtle political messaging, the band's cameo appearance on NBC's "Parks and Recreation," and how much peril young readers can handle.

Since we're still excited about his group's impending show, we decided to ask Meloy some different questions ... and answer them by repurposing some of his lyrics.

SEVEN DAYS: Greetings, Colin! You're coming to Vermont at the perfect time of year.

Colin Meloy: A barony of ivy in the trees, expanding out its empire by degrees. And all the branches burst a'bloom.

SD: Um, indeed. People are excited you're coming to the Burlington area.

CM: Sweet descend this rabble round — the pretty little patter of a seaport town.

SD: Well, that's a fancy way of putting it.

CM: Here we come to a turning of a season.

SD: Technically, it isn't summer until Thursday, June 21. But this Saturday is close enough.

SD: Generally speaking, how would you say things are going as of late?

SD: Wow. Tell me how you really feel!

SD: I would think that fronting one of the most popular indie-rock bands of the 21st century must count for something.

CM: We know, we know. We belong to ya. We know you built your life around us.

SD: Moving on, I was wondering if you could weigh in on a personal problem I've been having lately.

CM: I alone am the answer. I alone will make wrongs right.

SD: Cool, cool. There's this person I know who makes me want to set my hair on fire. Everything they do and say just drives me bananas. We have a lot of friends in common, and I worry that if I say something to them about their behavior and attitude, there could be major fallout in my circle of friends. What do I do?

SD: Whoa. First of all, I didn't say it was a he. Second, isn't that, like, incredibly harsh? Can you recommend a more peaceful approach?

CM: If you calm and let me pass, you may render me a wreck when I come back. So calm your waves and slow the churn, and you may have my precious bones on my ... on my return.

CM: You belong to the gang, and you say you can't break away. But I'm here with my hands on my heart.

SD: OK. [Long pause] I think I get what you're trying to say. It's hard for me to know how to handle interpersonal drama sometimes.

SD: That sounds wise but also really hard. I feel like that advice is going to rattle around in my brain for a while.

CM: And it won't leave you alone.

SD: It's just that it's taken me a long time to even achieve the level of patience at which I'm currently operating.

CM: We all do what we can. We endure our fellow man.

SD: Do you ever feel similarly frustrated?

CM: I wanna love somebody, but I don't know how. I've been so long and lonely, and it's getting me down. I wanna throw my body in the river and drown.

CM: Maybe I should just let it be, and maybe it will all come back to me.

SD: Dude, you are like the indie-rock Yoda over here.

SD: After all this time, do you think you'll ever just pack it up and retire?

CM: The tides will come and go, witnessed by no waking eye. The willows mark the wind, and all we know for sure amidst this fading light: We'll not go home again.

The original print version of this article was headlined "Word Salad"