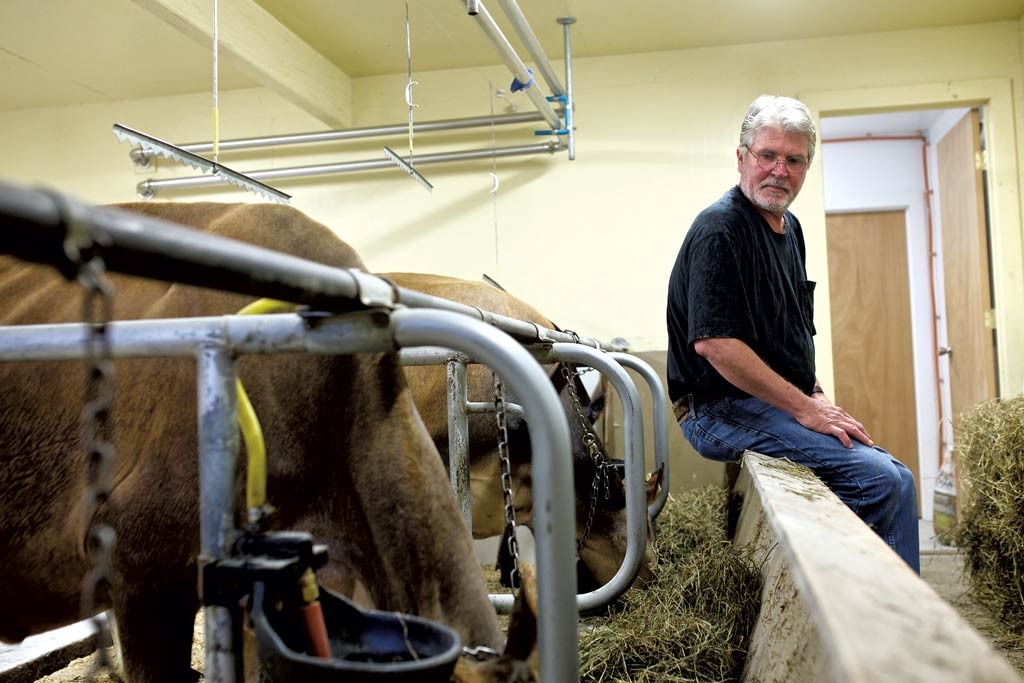 Go big or get out: That's the conventional wisdom that has been driving the dairy industry in recent decades. Plenty of Vermont farmers have chosen the second option. As commodity milk prices have yo-yoed between record highs and crushing lows, mid-size dairies in particular have felt the squeeze. In the last decade alone, the total number of Vermont dairy farms dropped from 1,433 to 993, according to the Vermont Agency of Agriculture.

But not all of the surviving operations are large ones, milking thousands of cows. In fact, a growing percentage of Vermont's remaining milk farms are small. Between 2007 and 2012, the number of dairy farms with fewer than 10 cows increased by more than 30 percent to 217, according to the U.S. Department of Agriculture That's almost one quarter of Vermont's dairy farms. Small dairy herd numbers are on the rise nationally as well.

In Royalton, one longtime dairyman is singing the praises of this new model — the so-called "micro-dairy" — and supplying its practitioners with the equipment they need.

"At one point I had a farm with 250 head of cows, and I didn't enjoy it," said Steven Judge, who has been milking the animals for more than 50 years. Today, he keeps a tiny herd of four Jersey cows on his small, hilly Royalton farmstead.

Judge runs Bob-White Systems, a company that invented a small-scale pasteurizer designed for processing milk on farms. But the mini-pastuerizer comes with a hefty price tag: $70,000. So Judge is diversifying, brokering the purchase of bulk tanks, butter churns and other milking equipment specifically designed for micro-dairies.

"I really appreciate small-scale agriculture that is scaled to meet the needs of a community," Judge said. "I like to see cows in people's backyards."

The idea behind Bob-White is to put farmers in charge of their own destinies. That means being able to pasteurize — the process of heating milk to kill most of the possible pathogens, protect against disease and slow spoilage caused by microbial growth — on-site instead of shipping milk to a big processor, where it is combined with milk from other farms and eventually pasteurized and homogenized. Marketing its products directly to consumers allows a micro-dairy to command higher prices.

In July, Judge may have solved another problem for small dairy operations: His farm hosts the only private lab in Vermont certified by the Food and Drug Administration to test the safety and quality of raw milk being sold by farmers. Under Vermont law, farmers selling more than 87.5 gallons of raw milk each week must have their milk tested monthly. Prior to Bob-White's recent FDA certification, that required driving samples to the state lab in Burlington.

Why the growing interest in small dairies?

"A lot of folks see it as part of a diversified business plan," said Andrea Stander, the director of the farm advocacy group Rural Vermont. Manure enriches soil. Byproducts from milk processing, like whey, can be used to feed pigs or fertilize cropland. It's hard for Vermont to compete against California or the Midwest in commercial dairy production, said Stander, but the state excels in other ways.

"One of the things we do really well in Vermont is grow grass," she said. "We have the climate for it, we have the history for it. A small-scale, grass-based dairy has real potential to be economically viable as part of a diversified farming system."

When he started dreaming about designing his own small-scale pasteurizer, Judge applied some of the same thinking that guided an earlier enterprise with similar goals. In the early 1990s he founded Vermont Milk Producers and created the Vermont Family Farms brand of milk. The goal was to market milk under a Vermont label, and pay farmers more than they would otherwise earn in commercial production. He ultimately sold the label to a larger dairy co-op, St. Albans Cooperative Creamery. The St. Albans co-op passed the brand off to Hood, and eventually the label disappeared.

His new project puts dairy science back in the hands of farmers. Judge's pasteurization device, called the LiLi (short for low imput, low impact) was initially plagued with problems. The first prototype — which Judge said he and his engineers tested extensively — couldn't pass FDA approval. Consultant Amy Shollenberger stepped in to help Bob-White navigate the regulatory landscape, and said she quickly realized that the food-safety and production rules around dairy processing were designed with bigger operations in mind.

"They had to figure out how to work within the rules at this tiny little scale," said Shollenberger.

Cornwall businessman Bruce Hiland, who has known Judge for years, said Judge faced an uphill battle when it came to bringing the LiLi to market.

"Steve has done a remarkable job of fighting his way through the established order to come up with, in this case, a really imaginative, creative, effective device that will help small family farms," said Hiland.

By offering "gentler" pasteurization than some larger-scale equipment, Judge claims the LiLi better preserves the taste of fresh milk. "The flavor of milk is every bit as complex as wine, but it's been forgotten and ignored," said Judge.

But getting the LiLi onto farms has been tough, given the price tag. The model that eventually earned that stamp of approval required significant, costly engineering changes — including a larger pump and heat exchanger, more expensive valves and programmable computer controls.

"It exists to enforce regulations, not to encourage innovation," Judge said of the Food and Drug Administration in an email. "I don't blame the FDA, I just found the lack of an established and predictable review process to be extremely frustrating and expensive."

Bob-White has sold exactly one of the LiLi machines, to Back to the Future Farm in Westtown, NY. Farmers Lee and Rose Hubbert and Mike O'Dell bottle whole and chocolate milk from a herd of 50 Jersey and Holstein cows. They sell milk under their own label locally and plan to expand to New York City markets later this month.

Rose Hubbert said the farmers investigated other pasteurization systems and found the LiLi operated much faster. That's crucial for processing the 300 gallons a day they milk from their herd. "I think it's going to pay off in no time at all, to be honest with you," said Hubbert. "We're selling a lot more milk than we had ever dreamed of."

The LiLi's rocky and expensive start prompted Judge to explore other revenue streams for Bob-White Systems. That's why he began selling dairy equipment specifically for small producers. On a recent afternoon at his modest Royalton office, he pointed out milk pails, cream separators and cleaning supplies.

Judge also began importing small-scale bulk tanks — the stainless steel vats into which fresh milk is pumped and stored. At the time, he said, the smallest tanks available in the U.S. had a capacity of 600 gallons. Working first with a facility in Slovenia, then with one in Greece, he began selling bulk tanks with capacities between 15 and 90 gallons.

"Everybody thought I was crazy to try to sell these little bulk tanks," said Judge, noting it was the same reaction he got when he decided to build a milking barn for four cows. He estimates Bob-White Systems has sold roughly 250 tanks, ranging in cost from roughly $2,400 to $4,400, to micro-dairies around the country.

One of Judge's customers is Lindsay Harris, a dairy farmer in Tunbridge. Harris and her husband, Evan Reiss, cut their teeth as raw milk farmers at the Family Cow Farmstand in Hinesburg, where at the time they were the state's largest raw milk dairy. Harris said the proximity to a major urban center made the business economically viable, but she and her family wanted to live in a more rural setting.

They sold the business last year, and moved to Tunbridge to start Mountain Home Farm. Harris said she knew a raw milk business wouldn't sustain the family in the more remote location, so she and Reiss began making cultured butter, ricotta cheese and other lightly processed dairy products from eight cows. They bought a butter churn from Bob-White Systems.

"It was the only one I could find anywhere in the country, and here I'm 12 miles from his shop," she said.

She noted that Judge has made the micro-dairy industry a lot more accessible since the time she and Reiss started the Family Cow 10 years ago. At that time, they couldn't find a small bulk tank anywhere in the United States, and had to import one — for roughly $5,000 — from Europe.

Harris' choice to remain small was a complicated one. On one hand, she said, it's incredibly difficult to make a micro-dairy work financially. Even something as simple as buying a small supply of labels for her milk products is difficult; suppliers are used to dealing in truckloads, she said, not boutique quantities.

But she likes having total control over her herd and her product, and having a hand in every step of production.

"I think it takes a pretty special situation to make it profitable, to make it work," she said — and Mountain Home Farm isn't yet at that point. Harris and Reiss are exploring other ways to derive income from their farm, including sustainable forestry.

"You aren't going to send your kids to college and vacation in Europe on a micro-dairy," Judge agreed. "It's a supplemental income."

For now, Judge is still mulling over the problem of the LiLi and trying to design a pasteurizer that costs less and will still earn FDA approval. All a pasteurizer needs to do, he pointed out, is heat milk to 161 degrees Fahrenheit and hold it at that temperature for 15 seconds.

"Why should a machine that is capable of doing that cost more than a new BMW?" he asked. "It doesn't make sense."

The original print version of this article was headlined "The Rise of the Micro-Dairy: A Longtime Dairyman Thinks Big — By Going Small"