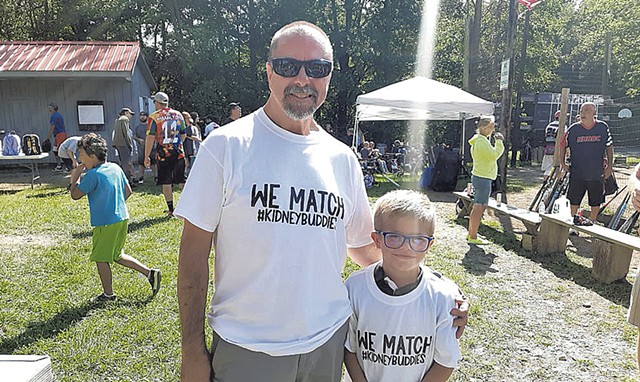 Vickie Foster received terrible news in the spring: Her 9-year-old son, Kayden, desperately needed a kidney transplant. Fearful that he wouldn't survive a wait, Foster posted on Facebook in search of a donor.

She received a message the next morning from a stranger who was willing to see whether he might be a match. The man, Dan Hamel, also said he was her uncle.

"He told me his story, and it was amazing," said Foster, a Pownal resident.

That story began long ago, when Hamel, who had been adopted as a baby, first set out to reunite with his biological family. Digging through records at the Bennington Town Hall, Hamel learned that his mother had died just months earlier but that he had several siblings in the area. He tracked them down and stayed in touch over the next 35 years, eventually leading him to the Facebook post from Foster, one of his sister's children.

As his great-nephew received daily dialysis treatments, Hamel underwent a long series of tests, each of which suggested that he would be a suitable donor. But physicians still had to determine whether he had the right type of tissue. As Hamel drove home from work one evening, his phone buzzed. "This is the best day ever," Foster's text said. "You're a perfect match."

"It was like it was meant to be," said Hamel, a 57-year-old truck driver who lives in Hartland.

Hamel finally met Kayden at a softball tournament in late September held to raise money for his operation. The two posed for a picture wearing shirts that read, "We Match #kidneybuddies." Surgeons transplanted the kidney a month later. The procedure was a success.

The transplant has had a major impact on both donor and recipient. Kayden, who had not grown in two years, suddenly has an appetite again — especially for pizza. Hamel, meanwhile, feels closer to his family than ever; he and Foster text almost daily, and he regularly visits Kayden.

"There's no words that describe what this did for me as a person," Hamel said.

The original print version of this article was headlined "Family Reunion"