A Local Writer Talks About Mashing Up Cowboys & Aliens 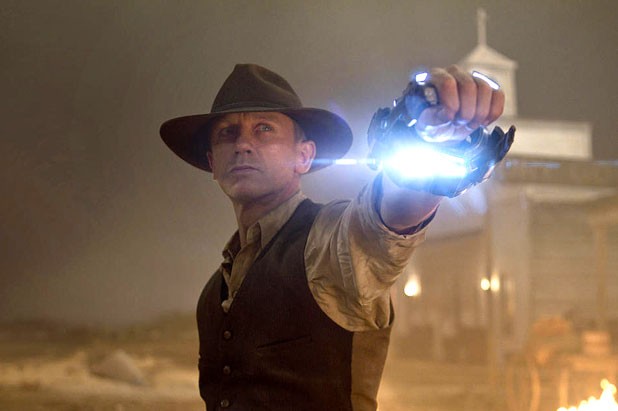 Moviegoers who have seen the early-summer trailer for DreamWorks’ Cowboys & Aliens, in theaters this Friday, might be forgiven for wondering, WTF? The film appears to start like a traditional Western, with Harrison Ford as a crusty sheriff and Daniel Craig as a mysterious loner. Then the aliens invade. By the time the title flashes on the screen, ending the preview, audiences are often giggling in excitement, disbelief or both.

So, is Cowboys & Aliens the new Men in Black? No, said Hawk Ostby of South Burlington, who cowrote the film’s screenplay based on a graphic novel created by Scott Mitchell Rosenberg.

“You’re very close to camp with a title like this,” acknowledged Ostby, 44, speaking on the phone from San Diego, where he’d flown to attend Saturday’s premiere at Comic-Con. One of the first priorities for the film’s writers, he said, was “setting the tone. We’re not making a spoof here; this is a serious movie. Don’t come expecting a comedy.”

Also, don’t come expecting to wear 3-D glasses just because C&A is based on a comic book. Ostby said director Jon Favreau “was pretty specific about doing it in 2-D.”

Ostby and his L.A.-based writing partner, Mark Fergus, also coscripted Favreau’s earlier comic-book hit, Iron Man. Before that, the duo went to the Oscars for their work on the Children of Men screenplay. Their indie drama First Snow, directed by Fergus and starring Guy Pearce, was released in 2006.

Cowboys & Aliens has a whopping six credited screenwriters, according to the Internet Movie Database. How did Ostby and Fergus fit in? They were one of two distinct teams, said Ostby. (The other included “Lost” head writer Damon Lindelof and “Fringe” creators Roberto Orci and Alex Kurtzman.) “We got it to the 50-yard line,” Ostby said, “and the other team got it the rest of the way.”

Ostby and Fergus didn’t work on the set of C&A as they did with Iron Man. Would he recognize his individual handiwork in the finished product? “Moviemaking is really a collaborative endeavor,” Ostby noted, one that includes not just various writers’ contributions but also “other things ... invented by actors or the director. As a screenwriter,” he said, “your biggest job is to get the structure right. It’s always interesting to see how things evolve — the bending and the sausage making of the movie.”

In this case, “getting the structure right” involved “dealing with two different mediums,” Ostby said. That meant asking questions such as “How do you capture the feeling of what was in the graphic novel? What needs to be there and is iconic and inherent in that material, and what sort of things do you need to invent to have an engaging movie?”

Ostby and Fergus have more big-budget projects in the works. They just finished adapting James Patterson’s young-adult series Maximum Ride to the screen, and they’re “rebooting” the Lara Croft series, which is “very exciting,” Ostby said.

So, no more comic books? “When you have some success in one thing, you tend to get pigeonholed into it,” Ostby said with a chuckle. Since he grew up in Norway, American comics weren’t part of his childhood. But he was revved by his Comic-Con experience last weekend, saying, “It’s quite wild. It’s pretty spectacular.”

Fergus and Ostby first teamed up in New York about 15 years ago, but they’ve “never worked in the same room,” said Ostby. Though he chats every day with Fergus, Ostby does most of his writing from his home in Vermont, where he lives with his wife, Monica, president of group-gifting service Inlu.com, and their kids. “I’m more efficient at home,” he said. “I love to have my routine. It’s nice to look out the window and see trees.”

In addition to their work on big Hollywood projects, Fergus and Ostby have “two originals we’re hoping to get going,” said Ostby. One he described as a “mashup between a heist film and a prison movie,” the other as “Deliverance meets Southern Comfort.”

At a meeting last spring of the Stowe Film Society, organized by local filmmaker JoDa Hodge, Ostby talked candidly about the initial process of pitching First Snow in 1999. Some major Hollywood players loved the script ... until they found out it ended on a downer that couldn’t be rewritten. “We weren’t ready,” Ostby said. Instead of basing their career on one breakthrough deal, he and Fergus slowly worked their way up.

Original projects, Ostby noted from San Diego, are a hard sell in today’s Hollywood. “As movies get bigger and more expensive, you try to minimize the risk,” he said, “and part of that is picking brands that are already in the public consciousness” — such as Cowboys & Aliens.

Still, there’s definitely something original about a sci-fi Western. While Cowboys & Aliens may not be based on a director’s vision, like Inception — a trend-bucking example from last year — Ostby hopes it will give this summer of familiar-looking blockbusters a kick.

“You hear so many people grumbling that there’s nothing new,” he said. “Well, here’s something that’s new and fresh.”