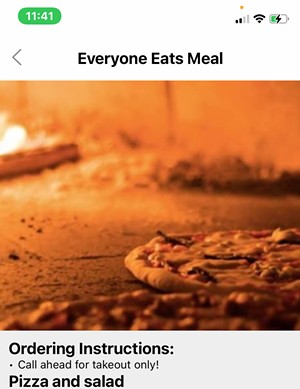 Plenty of people and businesses helped feed those less fortunate during Thanksgiving last week. But the need remains.

Now there's an app for that. The team behind Localvore Passport, a subscriber-only platform for restaurant deals, has teamed up with Vermont Everyone Eats, a hunger relief program, to put free meals into people's hands easily.

Funded by federal CARES Act dollars and an additional appropriation from the Vermont legislature, Everyone Eats has provided thousands of meals during the pandemic, usually at food distribution sites. But over the summer, the program hired Localvore to create a new, free portal that allows those looking for free meals to browse participating restaurants and order directly through an app.

In the months since the system launched in October, more than 1,000 people have signed up to order more than 10,000 meals from dozens of restaurants around the state, according to Localvore cofounders Dan White and Michael Nedell.

"It's been really rewarding for us to see that kind of steady traction and usage," White said. The company's technology "doesn't necessarily mean discounts. In this case, it's free meals to help people that have been impacted by COVID."

Users visit localvorepassport.com/everyone-eats and fill out a form to create an account and download the app. The program displays participating restaurants, and users can pick meals for themselves and other members of their households.

The restaurants generally prepare meals for the program each day according to nutritional guidelines. Another requirement: 10 percent of the ingredients must come from local producers. The restaurants get reimbursed $10 per meal they provide.

"The consumer gets free food and, essentially, financial assistance," White said. "The restaurant gets revenue and cash flow that allows them to continue to operate and employ people. But they're also moving their inventory, which means farmers and producers and distributors are getting that continued economic support."

The Everyone Eats program is only funded through the end of December. But Nedell said the need isn't going away. During an interview on Monday, he noted that users had already ordered more than 100 meals just that morning. Other Everyone Eats distribution programs run daily at sites around the state, too.

"If someone has lost their job, they've been furloughed and they need free meals a couple times a week" and are able to get fed, White said, "that's awesome, right?"