Outside Waylon Speed’s practice loft in a Williston warehouse, airtight country-metal songs waft into the street. Inside, a black-and-white photograph of Hank Williams fills an entire wall, the country legend peering between two stacks of amplifiers as a shirtless Kelly Ravin cracks a 27th-birthday Budweiser.

His band is rehearsing for an upcoming tour and a release party for their third full-length album, Valance, at the Higher Ground Showcase Lounge in South Burlington. That show will also feature Burlington punks Rough Francis and Speed bassist Noah Crowther’s acoustic duo, Rabid Cobra.

Waylon Speed rose from the ashes after the demise of popular local bands Lucy Vincent and Chuch. Ravin, who sings and plays guitar, says he was on tour in the Caribbean with Lucy Vincent in 2008 when he reached a boiling point.

“It didn’t end pretty,” he says of his departure.

After a year of playing solo shows around town and taking his Kelly Ravin Trio on cross-country tours, the musician met up with Chuch members Chad Hammaker and Justin and Noah Crowther at a Honky-Tonk Tuesday session at Radio Bean. They were seeking an ax man to round out their posse.

“Kelly was just an unbelievable fit,” Hammaker says. “I had never played in a band with another guitarist without butting heads.”

“Everyone’s got an ego; there’s no getting around it,” he says. “But all of ours just disappear when Waylon Speed play together.”

They named themselves after Hammaker’s son, Waylon, who, after watching the movie Speed Racer, decided to rename himself.

It didn’t take long for Waylon Speed to start gigging beyond Vermont, including in west Texas, where their mix of country twang and metal is a natural fit. Noah Crowther recalls an older woman approaching them after a show in Austin to say, “Y’all are way more Texas than any of these boys down here. Not bad for a bunch of Yanks!”

“Yeah, we do really well in Texas,” Ravin says. “It’s just hard to get there.”

Though they’ve had their share of van problems, the band members pride themselves on never missing a show thanks to their DIY know-how — both Noah Crowther and Hammaker are auto mechanics. Their respect for the handmade extends to their instruments, too: Ravin’s Telecaster-style guitar and Noah Crowther’s P-Bass-esque bass were made by Burlington artisan guitar luthier Creston Lea. Ravin’s father built his amplifier, and both of the band’s guitarists make pedals for themselves.

Another notable, if less musically inclined, construct is a ball of fireworks the band lit in the van while driving through Kentucky.

“It was like a cannonball of bullshit fireworks,” Justin Crowther remembers. After throwing the blazing flambeau from the moving van, the band watched in horror as “a fire truck circus” whizzed by the truck stop where they laid low until the blaze was snuffed.

Though waggish humor is an obvious and important aspect of the band’s appeal, an earnestness is at the head of Speed’s style and sound.

“This band means the world to all four of us,” Noah says. “It’s the end-all, be-all of what the fuck we do.”

In each of Valance’s 10 songs, that dedication and talent is evident. Ben Collette engineered the album last October at Phish’s Barn recording studio outside Burlington. The Barn’s open-room setup allowed the musicians to play together while recording, capturing a live-show sound.

Collette recorded Speed onto two-inch tape, transferred it to Pro Tools, then mixed it back onto tape, which, Noah adds, “is about as analog as it gets these days.”

Special guests on Valance include Joe Cleary on fiddle, Brett “the Ghost” Lanier on pedal steel and Adam Frehm on lap steel guitar.

Speed write their songs collaboratively. “Silver and Gold,” an album highlight, was written by passing a notebook around and trading riffs at practice. The song evolves from a rolling, country pace into a pulsing ballad marked by a slightly distorted guitar relishing the euphony. Ravin and Noah Crowther trade singing on the verses and meet in perfect congeniality for the chorus.

The record was tracked in five days and mixed in two. For mastering, the group solicited famed engineer Fred Kevorkian, who’s worked with luminaries such as Iggy Pop, Willie Nelson and Phish.

Speed has another connection to Phish: Bassist Mike Gordon this year played an April Fools joke on Speed’s manager, Leah Konecny, by pretending to be a representative from Spin magazine who wanted to write a feature on the band.

“We were stoked!” remembers Ravin. “We were telling our wives and our families we were gonna be in Spin, but then after calling the number back, Leah was like, ’Oh wait, it’s Mike.’”

“Waylon Speed is a really cool band, so I meant only respect when I was doing this April Fools joke on Leah,” Gordon says. “And by the way, I realized that I missed by one day because it was March 31.”

The crank call from on high was more of a rite of passage than anything else. Gordon says Phish was subject to the same prank in the ’80s. “I’m really looking forward to hearing the new album,” he adds.

Speed say they’re proud of their Burlington home but are careful not to overexpose themselves here. Tour life has its perks, after all.

“We get to watch movies in the van when we go on tour,” Ravin says. The group recalls showing up at a venue one night while holding back tears after watching E.T. on the ride there. “It was that scene where he’s all pale an’ shit in the ditch,” he continues, before taking a long, contemplative drag from his cigarette.

After practice, the guys step outside to continue celebrating Ravin’s birthday. They congregate around the bed of his black pickup and listen to demos of songs in the works for their next album.

Asked whether they still get skittish before big shows, the band members agree that their chemistry gives them confidence.

“Y’know, with my old bands we’d get back in the van and be like, “That was a bad show,” Noah Crowther says. “That doesn’t really happen with us.”

“Yeah,” Hammaker says as he lights a thin cigar and shakes out the match, “there are some days when I just feel like we could take over the world.” 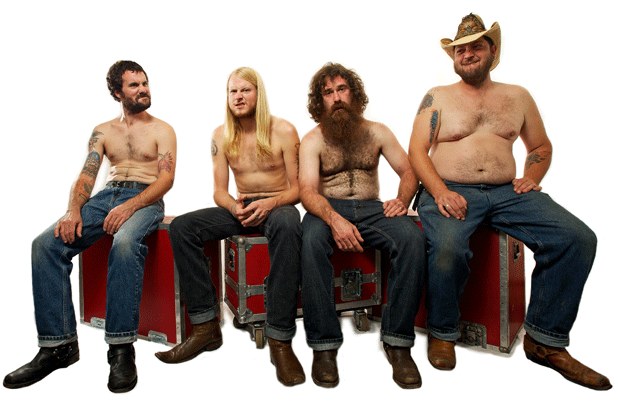