A Lincoln Family Has a Peachy Summer Job With Paradise Fruit 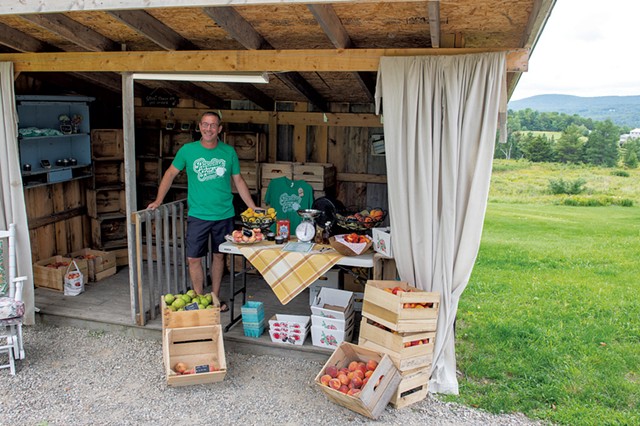 Mid-August marks a glorious, fleeting time of the year in Vermont: peach season. Last week, local orchards started filling their fruit stands with crates of the fuzzy golden globes and scheduling precious pick-your-own slots through subscriber-only email lists. We're a little north of where peaches prefer to grow, and that makes them a risky proposition for many orchardists. The crop we get is incredible, but it's limited.

The Goodyear family in Lincoln works to bolster that supply, and its peach season has been in full swing since mid-July. Todd and Jen Goodyear, both 46, run Paradise Fruit with their three kids, ages 21, 17 and almost 16. The unique seasonal business delivers peaches, plums, nectarines and cherries from growers in the Hudson Valley of New York right to the front doors, porches and mailbox-side coolers of Addison County residents, extending the season for the area's stone fruit lovers.

"They craved fresh fruit and couldn't find it anywhere." Todd Goodyear tweet this

I first encountered Paradise Fruit by accident, driving down the western side of Lincoln Gap Road in late July. I saw the Goodyears' signs for "Fresh Peaches" and pulled off the dirt road to stock up at the fruit stand. It was my first peach of the season and, although eating while driving on the twisty road wasn't my best idea, I'd finished the candy-like white doughnut peach by the time I hit pavement.

The mountainside fruit stand is popular with hikers, bikers and Gap Road drivers. But it's a small part of Paradise Fruit, which brings 5,000 pounds of peaches and other stone fruit into the state per week during the height of summer. The business supplies about 20 local businesses, including farmstands, preserves and soda producers, and Healthy Living Market & Café, in addition to home delivery.

One summer, the Johnsons headed west on a quest for peaches. They found them near the Great Lakes and decided to repeat their fruit-filled vacation the following summer.

"People found out they were going and said, 'Hey, will you pick some up for us?'" Todd explained. "The next year, they said, 'Hey, here's some gas money.' More and more people caught on, and it just became a business."

The Johnson family ran Paradise Fruit with their four kids, whom they homeschooled. The business grew to more than 150 residential customers and wholesale accounts, including Healthy Living and the now-closed Natural Provisions Market and Deli in Williston.

As the Johnsons' kids got older, they started looking for a new family to take on the business. Todd and Jen were also homeschooling their three kids, and the families knew each other through their shared faith. Todd is now a pastor at the First Baptist Church in Bristol and the area director for Young Life youth ministry. But he'd previously worked in sales and had covered a delivery route for the Johnsons one summer while they were on vacation.

"That was my foot in the door," he said with a laugh. "They approached us and said, 'Would you like to do this with your kids?'"

The Goodyears took over in 2015. "It really became our summer vacation as a family," Todd told me while sitting in the breezy Young Life tent on the first day of the Addison County Fair & Field Days. Todd's jobs are both part time, giving him the flexibility to run Paradise Fruit from mid-June, when the first cherries are ready, through early September, when they deliver the last peaches of the season. 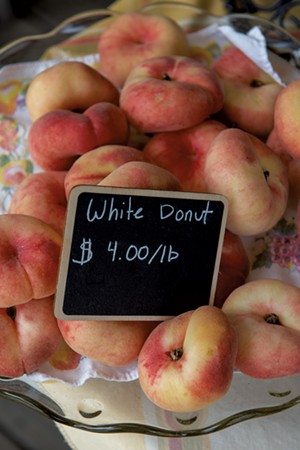 For the first few years, the kids' work was to tag along with their dad on the drive to pick up the fruit in the Hudson Valley. Now that they're teenagers with driver's licenses, they each have their own delivery route.

Todd contacts the growers each Monday to find out what's ripe, updates the simple website and sends out an email to let customers know what's available. Orders are due by 10 a.m. on Wednesday, so Todd can let the growers know how much to pick.

This time of year, the orders are large enough that the Hudson Valley orchard sends a truck up to Lincoln, saving the family the six-hour round trip. (Todd honors the Johnsons' trade secret: He doesn't divulge which growers he works with. But he does share that the family-run orchard uses Integrated Pest Management practices and is Good Agricultural Practices-certified.)

Paradise Fruit's customer list has grown to 380; the biz delivers about 100 orders per week in addition to the wholesale markets.

The bulk of the work happens on Thursday mornings, when the fruit arrives at the Goodyears' house. Jen manages breaking it into orders before heading to her full-time job. Then the kids head out on their delivery routes — roughly an hour and a half each; they drop bushels at homes along the Route 22A corridor between Fair Haven and Vergennes; in Middlebury, Bristol and the surrounding towns; and up to Hinesburg, Shelburne and Charlotte in Chittenden County. Todd handles the rest in a rented truck.

The home-delivery aspect taps into small-town nostalgia, Todd said. The business accepts Venmo at the fruit stand for hikers but takes cash or checks for delivery.

"Some of the places people leave us money are so funny," he added, noting that one customer pins the same envelope, year after year, to the back of her mailbox. The family members often get pun-filled notes from their customers, too, or encounter pets when dropping peaches inside the front door.

"For me to see my kids interact with people in this way is invaluable," Todd said. "I'm a seventh-generation Vermonter, and being ingrained in the community, involved and connected, is who I've been raised to be."

He acknowledged that the family's business isn't really serving the community — they're getting paid for it, and the proceeds now fund the kids' tuition to Trinity Baptist School in Williston. But it's teaching the kids life lessons.

"It's the richness of knowing your neighbors," Todd added. "And we happen to know their porches and their dogs and just inside their front doors."

Once the kids get older, Todd is confident they'll be able to find another family to enjoy the business and keep it going. "We're just a little part of this story," he said. "There would be a lot of disappointed folks if the fruit stopped rolling."

For customers, the business offers a convenient way to stock up on a scarce summer treat. As a new Addison County resident, I recently placed a delivery order of my own — half a bushel of yellow peaches, which comprise 75 percent of Paradise Fruit's total sales — and an assorted peck of the week's other offerings.

As I waited for the truck to pull into my driveway, I flashed back to the childhood joy of catching the ice cream truck and tried to think of a peachy pun to write on my check for $79.

I'll turn a bit of the bounty into peach salsa and grill a few peaches for dessert. I'll make shrubs for sipping; crumble, which I'll eat for breakfast; compote; and a sheet tray or two of frozen slices, so I can pretend that it's still peach season months from now.

First, though, I'll take Todd's approach to peach eating. "Fresh," he said. "With the juice running down your elbow."