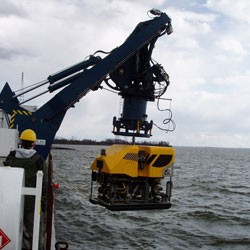 Ben Kinnaman is a deep thinker — four miles deep, to be precise. As cofounder of Greensea Systems Inc. of Richmond, he specializes in designing and building unmanned vehicles that operate in one of the world’s harshest environments: 20,000 feet below the ocean’s surface.

At first glance, it’s hard to fathom why a company that makes deep-sea submersibles would set up shop above a shoe store at the foot of the Green Mountains. The nearest ocean is 200 miles away. For now, the company doesn’t even use Lake Champlain to test its remotely operated vehicles, or ROVs, though it probably will one day. According to Kinnaman, the lake is actually an ideal testing environment: It’s long and deep, with good visibility and benign conditions.

But Greensea is awash in apparent contradictions. It’s a small company — just four employees and two outside contractors — that has made enormous strides in the underwater industry. Kinnaman and his team have succeeded by staying small and nimble, avoiding heavy debt and using primarily open-source, or nonproprietary, software and equipment designs, for which they don’t charge customers. Yet Greensea Systems is turning a profit and has increased its sales dramatically since it was founded four years ago.

It’s not surprising that Greensea has barely made a ripple in the Green Mountain State. There’s not much local demand for deep-sea robotic equipment. And a visit to the company’s modest second-floor offices upstairs from John’s Shoe Shop North doesn’t immediately reveal its mission.

At the top of the stairs hangs a blueprint of the Columbia space shuttle. On another wall is a whiteboard scribbled with confusing diagrams and algorithmic equations. A large white dome wrapped in plastic sits atop some cardboard boxes.

The dome, I learn later, is actually a satellite communications antenna that will enable anyone with Internet access to watch a live video feed from a deep-ocean ROV, similar to those providing images of the BP Deepwater Horizon spill. The whiteboard sketches are part of a feasibility study of two huge underwater rovers the company is developing for the U.S. Navy.

As for the space-shuttle blueprint, in 2003, Kinnaman was hired for the Columbia salvage mission. When the orbiter disintegrated upon reentry, its flight path took it over several large lakes in Texas. Kinnaman’s job was to survey the lake bottoms looking for shuttle debris.

Kinnaman greets me in his office with a warm and hearty handshake. He’s dressed in an olive-green work shirt with a patch over one pocket that reads “Ben,” an outfit more suited to a refrigerator repairman than a company president. But Kinnaman wears the regular-guy look well. At 35, he’s tall and tanned, with a shaved head, sea-green eyes and the lean, muscular build of a Navy SEAL.

He earned the physique through years of labor at sea. A native of Morehead City, N.C., Kinnaman grew up on the beach surfing, fishing and scuba diving. After getting his bachelor’s degree in physics from Davidson College, he spent several years employed as a treasure hunter in the Caribbean.

On the wall beside his desk hangs a sketch of a 17th-century Spanish galleon in Havana Harbor, the kind of sunken vessel he once pursued. As Kinnaman explains, such ships used to arrive in port after months of plundering the South American coast for gold and jewels. Then they often set sail for Spain at the start of hurricane season. That’s why, Kinnaman says, “there are a lot of wrecks in the Straits of Florida.”

Opposite his desk, an underwater dive map depicts a stretch of ocean near Key Largo, with dots indicating the locations of Kinnaman’s first two salvage dives. His employers were wealthy investors who’d claimed ownership of the wrecks and needed “strong backs and weak minds” for the dangerous job of recovering the riches.

“One day,” Kinnaman recalls, “I was standing on the deck of a salvage boat and got to thinking, There’s got to be a better way.”

Not long after, Kinnaman moved to the Baltimore area and worked at a company that built ROVs for the defense department. Whenever the Navy lost a vessel at sea, they got a call. Kinnaman did offshore salvage operations for several years before attending Johns Hopkins University for a graduate degree in robotics. He hoped to start his own company.

In 2006, Kinnaman and his wife, Joanna, realized they’d had enough of “the Beltway-bandit-defense-contractor thing,” as he calls it, and relocated to Vermont. It wasn’t an entirely blind move. Both had spent time skiing and hiking here and thought it would be a great place to start a family and a business. Of all the New England states, Kinnaman says, he found Vermont the most friendly to small businesses — despite its distance from the briny drink.

The underwater business encompasses research, salvage, exploration and entertainment. And it’s still a “cottage industry,” says Kinnaman, where teams in each specialty build their own vehicles to suit their particular needs. The result is that “everyone seems to start from square one and ... trip over the same mistakes.”

That’s where Greensea Systems comes in. Since 2006, the company has designed software to support the sensors, actuators and other control mechanisms used in submersibles. Its major innovation was the Open Software and Equipment Architecture — or “openSEA” for short — an open-source software library developed and maintained by the unmanned-vehicle-and-robotics community. Greensea developed a “common programming interface” for the electronics that run submersible equipment. In effect, openSEA allows ROV developers to build better vehicles because they don’t have to reinvent the wheel — sometimes literally — each time.

Meanwhile, Greensea has also begun making and standardizing some of the hardware its software operates. Kinnaman picks up a heavy cylinder the size of a coffee can. This device, he says, is mounted on the bottom of an ROV and measures its motion, including its velocity, orientation and position relative to the seafloor.

“About 90 percent of what makes these things run is really mundane, boring stuff,” Kinnaman says. “But if it doesn’t work, your vehicle doesn’t work.”

Greensea’s decision to use open-source software and architecture wasn’t motivated by pure altruism. Since 90 percent of the software is free, the company doesn’t charge its customers any licensing fees.

In return, Greensea capitalizes on the time its clients spend on the water. Free of proprietary barriers, customers can modify the software and provide feedback. Thus, Greensea’s products are continually being tested, debugged and strengthened in real-life, open-water scenarios — and those improvements are rolled into the software library for current and future users.

“A developer today using our library is using hundreds of vehicles at sea over the last four years and their experiences, their bugs, their fixes, and their improvements,” Kinnaman says.

Such ongoing R&D is crucial in the underwater industry, he adds, where “water time is precious. To get a ship offshore operating a vehicle, you could be looking at $50,000 a day.”

The collaborative approach has also enabled this small company to work on very big projects. In all, Greensea has released nearly 40 vehicle-control systems since it began — seven this year alone.

As for Greensea’s hardware business, the company built five complete vehicles in the last six months. They range in size from a submersible no larger than a window air conditioner to a 7000-pound deep-sea model as big as a minivan. Some stay tethered to a surface ship; others operate autonomously, launched from a submarine torpedo tube, and range miles from their mother ship. In all, Greensea has deployed 10 control systems that can operate at 20,000 feet.

“That damn deep!” Kinnaman says with a grin. For comparison, he notes that the Titanic sits at 12,600 feet, a figure he has at his fingertips. That’s because Kinnaman twice worked with filmmaker James Cameron — director of The Abyss and Titanic — surveying the historic wreck.

In fact, Kinnaman works in just about every industry that operates underwater except one: oil exploration. For this lifelong diver, the reason is obvious to anyone who’s seen the heartbreaking images emerging from the BP oil spill.

“Even before this event, I was pretty adamant that Greensea would have no part in the petroleum industry,” he says. Kinnaman also suggests that BP and other deep-sea oil companies could learn a lot from smaller, creative firms like his own.

“I wonder if they’ve polled the creative minds out there,” Kinnaman says. “Right now, they’re just pulling the same old tools out of the toolbox and throwing them at the problem and not finding a solution.”

But Kinnaman also understands better than most observers the enormous challenges of working at such cold, lightless depths, where pressures can reach 1000 atmospheres. Little wonder that scientists know more about the surface of the moon than they do about the ocean’s floor.

“When you’re five miles below the surface, navigating a vehicle is as hard as it gets,” Kinnaman says. “That’s the bottom of the world.”

Daunting as the field may be, Kinnaman sees enormous opportunities for his company to grow — in the water and out. Eventually, he hopes to develop robots that work on other dangerous tasks, such as chemical spills and unexploded ordnance removal.

And Greensea Systems is always looking for young talent. Two years ago, Kinnaman partnered with a Mount Mansfield Union High School class to build an unmanned rover similar to the kind used on the Mars missions. From spare parts provided by Greensea, the students had to build a robot that could maneuver around tight obstacles and find the most efficient route back to its battery charger. As Kinnaman puts it, “We’re not talking Legos here.”

Finding new blood matters to Kinnaman: With his wife and business partner now home with their 9-month-old son, he doesn’t work at sea as much as he once did. He leaves much of it to his younger engineers, such as 23-year-old Bobby Mohr, whom he hired earlier this year. Mohr has already spent 60 days at sea, including a few weeks in the Pacific. Not a bad gig right out of college, Mohr says.

In or out of the water, Kinnaman hasn’t lost his passion. While he sometimes slips into the techno-jargon of a software developer and robotics engineer, more often he reveals the boyish enthusiasm that first drew him to explore the ocean’s depths.

“I love my job. It’s wicked cool. We’re building robots for underwater!” he says. “If I were a high school student and heard something like that, I would have dropped it all and said, ‘My mind’s made up!’”