A Lichtenstein Sails Into Middlebury College

When it comes to scrambling high and low art, pop artist Roy Lichtenstein could be considered one of the great masters. In 1994, decades after his rise to fame in the 1960s, he received an unlikely commission, one that could be seen as the ultimate vindication of his calculated cultural transgressions. It was to design work that would adorn a yacht, that quintessential signifier of the upper echelon.

The fruits of this labor are now on view at Middlebury College's Mahaney Center for the Arts, accompanied by the contextualizing exhibition "Young America: Roy Lichtenstein and the America's Cup." At 77 feet long and 14 feet wide, the artist's "Mermaid" is the Young America — or, technically, its hull. The racing yacht sailed in the 1995 America's Cup with 1984 Middlebury College graduate (and art center namesake) Kevin Mahaney as its skipper. Today, Mahaney is president and CEO of the Olympia Companies, a hotel management, development and equity investment firm founded by his father in 1969.

"Where the boat is now is where I played lacrosse," Mahaney told the small gathering who celebrated the show's opening last week. Among the guests were representatives of the Osaka City Museum of Modern Art, which loaned maquettes of the yacht's hull and spinnaker, as well as schematic drawings, for the exhibition.

"Mermaid" is on loan from the Storm King Art Center in New Windsor, N.Y. On the lawn outside the Mahaney Center, it gracefully hovers over the surface of a pond, held up by discreet supports. Nearby are college-owned sculptures by fellow contemporary art giants Vito Acconci and Robert Indiana.

Covered from bow to stern, the hull features a yellow-haired mermaid that recalls the carved wooden figureheads of ships from earlier eras. The sparse colors, clean lines and Lichtenstein-style female, though, are distinctly modern.

Inside, Middlebury College Museum of Art director Richard Saunders has curated an exhibition to situate the Young America and the Lichtenstein commission within yachting's broader history. Saunders explained that the history of racing yachts dates back to 19th-century America, when schooners needed to be fast to be the first to reach merchant ships entering colonial harbors. 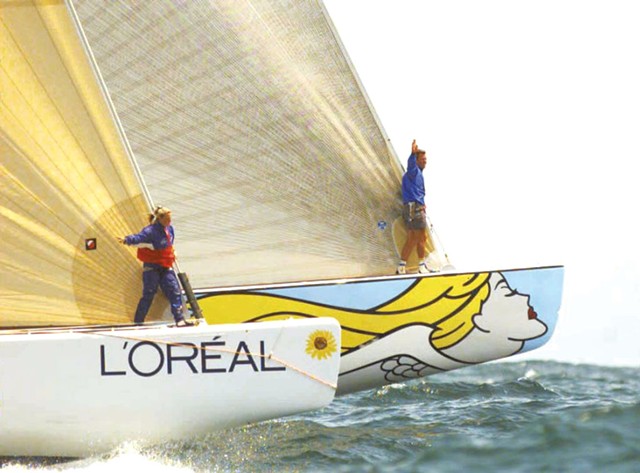 Though the purpose and design of yachts and yacht racing have changed considerably over the last couple of centuries, the Young America is a singular work in this history. "This commission was unique," Saunders said. "There was no other artist that decorated a boat in this way."

Saunders speculated that yachts doubling as contemporary art never became a trend owing to the domination of sports by corporate sponsorship. "The Young America is a moment in time," he said. "It wouldn't happen today, because there's too much money in advertising."

Yachting, as Saunders put it, "is all about wealthy people using their considerable resources to outmaneuver the competition."

The Lichtenstein commission, however, was not purely a vanity project. Mahaney and other members of his America's Cup syndicate, PACT 95, used their racing endeavor to launch a nationwide educational initiative.

"As we were doing the America's Cup," Mahaney told Seven Days by phone, "we were also doing a follow-along program with kids around the country, using the races to bring alive different subjects — mostly sciences and math, because the America's Cup is about designing fast boats."

Endeavoring to integrate the arts into their program, Mahaney said, the group decided to involve a famous artist. "Roy ended up bubbling to the top [of the list]," he said. Students across the country (Mahaney estimated 15,000 to 20,000 participants) were invited to design their own graphics for the Young America's spinnaker — one of its sails.

A model of the spinnaker that Lichtenstein made to accompany "Mermaid" is included in the exhibition. It features rays of yellow sun shining through clouds onto ocean waves. The original, functional spinnaker — the one used in the 1995 race — went missing in the months after the competition. Mahaney hopes it will resurface one day and is offering a $25,000 reward as an incentive. Aye, aye, captain!