A Journalist Is Felled By the Waterbury Adventure Challenge

I was stuck in my own personal Waterbury roundabout — endlessly circling the town offices inside and out — when a public servant extraordinaire came to my rescue. William Shepeluk, Waterbury's municipal manager, led me to the second clue of the Waterbury Adventure Challenge.

The game, which costs $50 to play, is organized by Discover Waterbury, the tourism branch of the nonprofit Revitalizing Waterbury. This is the second year of the challenge, which is a fundraiser for the organization. The game involves solving clues that are hidden in various spots in and around town, and learning about the region and its history as you play. A central figure in the challenge is Henry Janes, a Waterbury native and physician who served as a surgeon in the Civil War. I was snooping around Janes' erstwhile medical office last week, in service of the challenge, when Shepeluk rescued me.

I'm not sure how he knew I was in dire straits. Maybe he saw me walking in the hallway past his office countless times or spied me through the window, casing the building as I searched for a sign. He could've overheard me asking various people — a librarian, a volunteer with the historical society — if they knew anything about the Waterbury Adventure Challenge.

Never in my life have I been so pleased to arrive at a house of worship. tweet this

But something compelled Shepeluk to emerge from his office and offer assistance. When I explained my dilemma — that I was pretty sure I was in the right place but couldn't locate a clue —he pointed me in the direction of the next one.

I was grateful beyond words and felt extra blessed when I learned that Shepeluk is retiring at the end of the year, after 34 and a half years of service. I caught him — or he caught me — in the nick of time. I deciphered the clue, which was presented in symbols, and followed it to a church. Never in my life have I been so pleased to arrive at a house of worship. I found the next clue, read it and was starting to feel some momentum. I was certain I knew just where this clue led.

But soon, I was trapped in another Waterbury walkabout — this time, without a living soul in sight. I wandered around a peaceful part of town for about an hour, searching for the next clue. I learned the genealogy of several Waterbury families, including Janes', but came up empty in my hunt.

I reread the clue (for the 100th time) and reconsidered its key words and names: grave, quiet, plot, Moody, Watt. I thought about my father, who was a patient person with a fondness for cemeteries and walking. Even he might've grown weary of the loop-walk I found myself on.

I prowled a few more places in town. No luck. Finally, as the rules allow, I went to Bridgeside Books on Stowe Street and asked for a hint. A game official who co-owns the store told me the clue that stumped me was mostly a "red herring."

I drove home to Burlington dejected — even moody — and thought about the Waterbury mystery all night. Sleepless, I returned the next day and picked up the challenge where I'd left off. By now, I was on a "Hey, how ya doin'?" basis with the bench-hangers at the train station and the loafers in the park. I started asking for help, targeting the kind of people who know everything in a small town: a baker, a bartender, a mailman and a shop owner.

The baker at La Strada Bakery sold me two cookies for $1 and told me to come back later for an eggplant Parmesan calzone. (But later, I would need whiskey.) The mailman advised me to look out for the white dog on Moody Court. The proprietor of the Tiny Acorn told me she'd heard the challenge was hard. The bartender helped me read the mystery's map during lunch rush at the Blackback Pub, studying the graphic by the light of the window in the packed barroom. He assured me nothing was wrong with my eyesight.

Yep, bartender Tristan Baribeau confirmed, the key to the map is "definitely not very visible."

With another hint from the bookshop — this one major — I finally overcame the red herring and retrieved the next clue. I read it with great enthusiasm and even a little confidence: "Nothing could have prepared Waterbury for this task," it began. I could relate: Nothing could've prepared me for mine.

"Only a few will be chosen to ensure the safety and healing of those who committed the gravest sin of devotion against their own to ensure the survival of our union," it went on. There's more. Much more.

I called a friend, a history buff from Philadelphia, for help. He did some quick Civil War research and a little deep thinking and decided the clue was about fish spawning. I had already taken a detour to the Waterbury Reservoir and wasn't about to go back. I texted the clue to a knowledgeable Vermont friend.

He read it and called me: "What the fuck?" 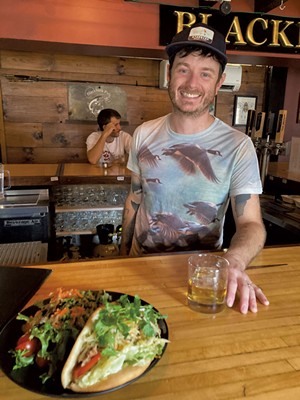 I went back to Blackback and told Baribeau I quit. He poured me a whiskey and recommended the jerk chicken sandwich. "I had it for breakfast," he said.

The lunch rush had subsided; I took a seat outside. The challenge was meant to take me back to the past, but, for the moment, I was pretty satisfied with the present.

I took another walk around town — including an interesting but fruitless jaunt to the Civil War monument — and got in my car to drive home. On the way, I pulled into a weigh station on Interstate 89 and called Chris Costello, a fourth-grade teacher at Brookside Primary School in Waterbury.

In June, he led a group of third and fourth graders on a Waterbury Adventure Challenge field trip. I wanted to know how a few dozen 9- and 10-year-olds fared on an adventure that felled me.

Costello, who's taught at the school for 32 years, told me the students did an abridged version of the challenge, customized for schoolkids.

"They really did enjoy the whole process," he said. "It sparked a curiosity about the town and [its] history. It made them realize there's more going on here, and [they learned]interesting stories about the people before them."

Costello said several families of kids in his class planned to do the full Waterbury Adventure Challenge over the summer. He's not sure if they completed it, but the game runs through October 11. It's not too late to start or to keep trying.

I'm accepting help, as the baker, bartender, mailman and municipal manager can attest.