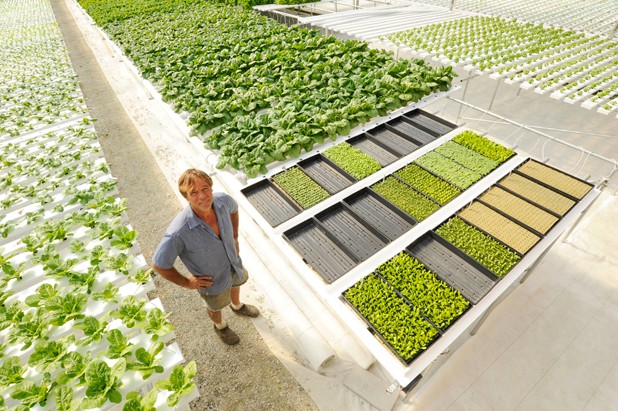 Long winters have always been the bête noire of Vermont farmers and foodies alike. But what if there were a way to cheat the dreary days and improve the quality of the produce in the process? Dave Hartshorn of Waitsfield thinks he’s found it.

Hartshorn and his partners, John and Ted Farr, own Green Mountain Harvest Hydroponics. It’s not the first Vermont farm to produce winter greens — several, including Pete’s Greens in Craftsbury, have found success in that endeavor. But Hartshorn and the Farrs bring it a step further using a modern take on an ancient technique.

Hydroponic agriculture isn’t a new concept. Archaeologists believe that the Hanging Gardens of Babylon attained their status as one of the seven wonders of the ancient world with the help of a soil-free growing system in which a slow trickle of water assured lush foliage. Taking a cue from Egyptian pharaohs, Roman emperor Tiberius had cucumbers and tomatoes grown for him through the winter using the same method, in greenhouses referred to as “transparent stone.” In the Americas, ancient Aztecs thrived on the harvest of floating gardens constructed on reed rafts, called chinampas.

Still, when someone mentions “hydroponics,” the modern mind is more likely to jump to illicit pot growing or to fat red tomatoes than to a wide range of culinary crops. Google “green mountain harvest,” and the top result is a medical marijuana company in Colorado. Hartshorn says that if the bud is legalized, he’ll consider expanding into that business himself.

For now, however, Hartshorn — who owns Hartshorn Certified Organic Farm and Hartshorn’s Farm Stand & Maple Sugar House, both in Waitsfield — is focusing on what he knows. That’s supplying food to markets, restaurants and schools.

Paul Morris, the innovative chef at Harwood Union High School in Moretown, has long purchased Hartshorn’s veggies. He recalls the farmer first mentioning the idea of a hydroponic farm three years ago. “He had this big plan for a greenhouse and was really interested in what schools would need, and we talked about some of the volumes we were using for lettuce,” says Morris, who heads food service for the whole school district.

In the meantime, Hartshorn and his lifelong friends the Farrs (Ted Farr is the company’s only full-time employee) decided to make good on their longtime goal of starting a hydroponic farm and scored a loan from the Vermont Economic Development Authority. Hartshorn kept his progress quiet until he showed up at Morris’ kitchen last May with hydroponically grown basil, red- and green-leaf lettuces and romaine. The last lettuce is of particular value to schools, because its nutrition profile allows it to be subsidized as a protein. Romaine is also rich in vitamins C, B and K, Hartshorn adds.

Since hydroponically grown plants remain alive, complete with tiny roots, after they’re picked, they stay fresh longer than conventionally farmed produce. Still, Morris usually uses what he gets right away. In August, the chef and his team made 50 pounds of Hartshorn’s basil into pesto the day it arrived. They keep the stock in the freezer to use in pastas, salads and all-local turkey sandwiches featuring GMHH’s lettuce, Cabot cheddar and Red Hen Baking Company bread.

Hartshorn’s lettuce also finds its way daily onto Harwood Union’s salad bar and into tossed salads. Morris says he eagerly awaits seeing Hartshorn walk through the door with his lettuce in January — not just because he’ll have a fresh, local harvest but because the farmer is a Harwood alum. Morris hopes his project will inspire the students.

Hartshorn and the Farrs had to hit the books themselves to figure out how to make their farm work. And they made major investments. Unlike the pulley structure that powered the hanging gardens, a computer system regulates the watering of GMHH’s plants. The $100,000 setup ensures that 67 gallons of water are recycled through all 18,000 plant-holding slots each minute.

Before long, the men hope to run the greenhouse more economically by powering it with biomass from the Farr brothers’ other business, Farr’s Tree & Landscaping Services. There is debate among farmers over whether hydroponic agriculture is indeed “greener” than simply trucking food north from warmer climes. But GMHH lives and dies by the ideal that local is best.

Green energy, which may also include solar panels, would befit the impressively clean operation. The bright-white greenhouse resembles a film set of a verdant field with its soaring ceilings and apparently never-ending view of growing greens. And, just like a Hollywood product, GMHH has had hefty start-up costs — a half million dollars.

The greenery is raised just above waist height, the better to give the farmer a detailed view as it grows. A close look at the back wall reveals a constant drip of water that helps cool and moisten the room, giving the impression of a mini rainforest.

As Hartshorn and partner Amy Todisco walk through the quarter-acre building, at its pleasant, temperature-controlled 75 degrees, he points out the tiniest seedlings sprouting in beds of rock wool. “If you stare at them long enough, you eventually see them breaking out [of their clay shells] like a chicken,” he says of the plants’ rapid growth.

Unlike the lettuces Hartshorn grows outdoors at his other farms, these take as few as five weeks to mature. Smaller salad greens are ready to pick in three or four weeks.

The technology yields the farm not just enough lettuce to supply its clients through the cold months, but a glut. As Hartshorn puts it, “As soon as I take one out and package it, that tray needs to be filled with another [plant]. There are 9000 [plants] looking for places to go as soon as you pick it. We need to sell a lot of lettuce.”

And the company is well on its way. Besides Harwood, GMHH supplies Peoples Academy in Morrisville and cafeteria company Sodexo. Though Hartshorn describes his uncommonly sweet product as “a gourmet lettuce,” chefs at restaurants of all stripes have begun to purchase it, including Localfolk Smokehouse, Angeleno’s Pizza and Arvad’s Grill & Pub.

Arvad’s chef, Mike Kennedy, has been using Hartshorn’s lettuces and basil since he started at the Waterbury restaurant two months ago. While the lettuce goes in sandwiches and salads, the extraordinarily large basil leaves are perfect for an appetizer special, wraps for chicken or pasta salads, he says.

Buyers at some local restaurants and markets, including Burlington-area giants City Market and Healthy Living, have promised to start purchasing GMHH’s veggies once their usual local sources dry up in the fall, Hartshorn says. But Kennedy is happy to cook with them year-round. “I think it’s a lot better and a lot more consistent than what you usually get,” he says of GMHH lettuce. “It’s a lot healthier looking — there are no brown spots.”

So is the taste. A leaf of Hartshorn’s Vermont Bibb lettuce (no “Boston” for this homegrown company) offers the bursting sweetness of a sugar-snap pea rather than the expected bitterness. The texture is exceptionally soft and silky, too. According to Hartshorn, “Field lettuce is more rustic. They have to handle some pretty rugged environmental conditions outside. These guys in here are babied, so they’re so tender.”

Kale and lettuce have slightly different environmental requirements that necessitate separate greenhouses, so GMHH’s kale-growing experiment is over for now. But Todisco says it produced big, full-grown leaves that were as soft and pliable as baby kale.

Once GMHH has perfected growing the greens it already sells, it will start producing tomatoes, peppers and cucumbers to “round out the salad profile” by 2015, Todisco says. After that, the possibilities are boundless. Hartshorn even talks of adding tropical fruit, if he can find a helper with time to research the process. Local lemons or pineapples in Vermont — in the winter? They could come sooner than you think, no greenhouse effect necessary.

For now, Vermonters can glory in the knowledge that this year they can make locavore salads while the snow is falling.