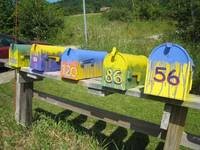 The rural mailbox is a study in contrasts. On the one hand, it’s a personal postal sanctuary fiercely protected by the federal government. On the other, provided the “current resident” owns it, a mailbox can also be a means of self-expression. Along Vermont roadsides, it’s not unusual to see Audubon scenes, American flags and Warren Kimble creations mingling with the standard black, slushy silver, or rusty-red metal loafs.

Kelly O’Brien is taking the mailbox medium one step further: In Huntington, the 38-year-old unemployed carpet saleswoman is turning postal regulation into public art. In the last two months, she’s transformed about 30 drab mailboxes around town into colorful creations. A red mailbox with blue polka dots and funky yellow lettering stands out on the Main Road into Huntington. Further down, a cluster of four cheerily painted boxes makes a statement at the intersection of Blackbird Swale. One of the lids is a landscape that looks like the surrounding area. Is that Camel’s Hump? In arched cursive letters it reads, “Our Road Leads to Heaven.” [See slideshow of O'Brien's mailbox art.]

O’Brien and her husband Joe live with two cats on a beautiful wedge of land at the corner of Mayo Road and the busy route between Richmond and Huntington. Former flight attendants who met on the job in Chicago, they built their own house — it’ll be 2 years old this fall — and co-own Film Buzz, Richmond’s premier video store. The shop’s mosaic countertop is one of Kelly’s art “projects.” Dozens of others — a whimsical tricycle totem, rusty sculptures, handmade bird boxes, self-portraits in oil — spill out of the house onto the wrap-around porch and into the yard.

It was only a matter of time before O’Brien got to the family mailbox. Last summer she painted the supporting post a bright-blue hue. For the box itself, she went for earthy sienna adorned with bright blue and green bull’s-eyes. When it was done, she envisioned having her way with every other postal receptacle on the street, so “all the mailboxes would be as pretty as the road.” And, she figured, “I thought it would be a cool way to meet the neighbors.”

To get the word out, ironically, she resorted to electronic mail. She posted a message on Front Porch Forum, the neighborhood email listserv that is building community connections all over Chittenden County, including in Huntington. “Hi, All — I’d like to paint your mailbox!” O’Brien enthused in her initial communication with her town’s Front Porch members. “You’d be helping me out by letting me paint and take photos for my portfolio . . . and you’ll benefit by getting a one-of-a-kind mailbox.” She added, “If you hate it, I can repaint it to the original black, gray or white.”

About a dozen people responded, and O’Brien went to work — on location. Before she starts to paint, she takes a picture of the mailbox with her cellphone — in case it has to be restored to its original condition — then cleans it, sands it, and peels off any stickers. The whole process usually takes a couple of hours.

Initially, O’Brien felt compelled to interview the mailbox owners about their favorite colors and animals and their personal styles. But “It messed me up,” she says. “I found myself not wanting to do those people’s boxes . . . Once I stopped wondering if people were going to like it or not, I started actually having fun.” Design ideas don’t come from her, she claims. “The boxes tell me what they want.”

They also tell her what they want to be called, O’Brien asserts. In the last month, she’s started signing her works and giving them descriptive names like “Fern Splatter” and “Drip Quints.” The former, surrounded by lush vegetation on Taft Road, is sky-blue, drizzled Jackson Pollock-style with green and yellow paint. The latter is a bank of five boxes, each with a different drippy color combination.

O’Brien isn’t aiming to make money from her mailbox art. But the experience has helped her better understand how she works. An art class at CCV helped, too. The product of a Kansas City cop and a “creative and crazy” mother, O’Brien is a self-described “people pleaser” who admits she dislikes authority. The contradictory qualities of a mailbox — it’s private and public, restricted and personalized — seem ideally suited to her unique psychology.

“I like that they’re all the same shape; they’re all identical,” she says. At the same time, “it’s not a box . . . It’s one big, blank canvas that wraps around.”

Although she says she always gets permission to paint, and never looks at people’s mail, O’Brien seems to enjoy the subversive aspect of the activity. Her dream? Painting peace signs on the front of every mailbox in Huntington. “I wouldn’t want to offend people, but it would be a great way to say, ‘Vermont says no to this administration.’ That would make me so happy, I’d pee my pants.”