Marijke and Mark Smith first met in the Peace Corps a half century ago, each trying to make the world a better place. So it's only fitting that, as they enter their twilight years, they're working to leave behind a cohousing community that perpetuates those values after they're gone.

The Smiths are co-owners of Windekind Farm, a 225-acre property on a south-facing slope of Camel's Hump in Huntington. This stunningly picturesque landscape, which they named after a character in a Dutch fairy tale — Marijke was born in the Netherlands — features mountain meadows, woodlands, ponds, streams, gardens and pastures. Currently, the Smiths operate a wedding and vacation cottage business on the land. There's even a one-fifth-scale model railroad that Mark built, which visitors can ride through the woods in warm weather.

But the Smiths' latest project is their boldest yet. Their goal is to create what they've dubbed the Commons at Windekind, a cohousing community of nine privately owned, single-family homes that share common resources and the values of community, collaborative decision making, energy efficiency and sustainable living. Launched three years ago, the project is halfway through the permitting process; construction of the first homes is expected to begin this summer.

The Commons at Windekind is the latest "intentional community" to pop up in Vermont, one of 22 such communities statewide, according to the Fellowship for Intentional Community, an international nonprofit. While a few are religiously oriented, most are secular and based upon a philosophy of sustainability and resiliency in the age of global warming. Ted Montgomery, founder of the Ten Stones cohousing community in Charlotte, once described his community as "a subdivision with a soul."

Although cohousing communities may seem like relatively new additions to the landscape, Mark points out that they actually hark back to Vermont's traditional land development patterns.

"The basic premise is, a shared economy is a stronger economy," he explains. "It all goes back to the basic principles of what Vermont is all about — our town meeting tradition, our village green, our common schools. It's a marvelous concept."

Marijke, who retains her Dutch accent, recalls how she and Mark met on horseback in northeast Brazil in 1963. Mark was serving in the American Peace Corps, she in the Dutch equivalent. When Mark's two-year stint was nearly over, the two realized they'd never be able to stay in touch, so Mark asked Marijke to marry him.

The couple left Brazil to "wander the world together," he says, first to the United States, then to Holland to marry, then back to the U.S. and on to British Columbia. During a stint at Outward Bound in Colorado, they learned about a farm for sale in rural Vermont. So, in 1967, the couple bought the Huntington property, a defunct dairy farm, for $30,000.

For many years, Marijke worked as a counselor in local public schools while Mark taught developmental psychology at the University of Vermont. By 2000, the Smiths were facing retirement and the challenge of how to preserve their land despite its enormous tax burden. Recalls Mark, "We just didn't have the financial wherewithal to take that on."

To make ends meet, the pair launched their current lodging business, offering three rustic post-and-beam cottages to vacationers. They then expanded into the wedding business because of the location's gorgeous panoramic views. 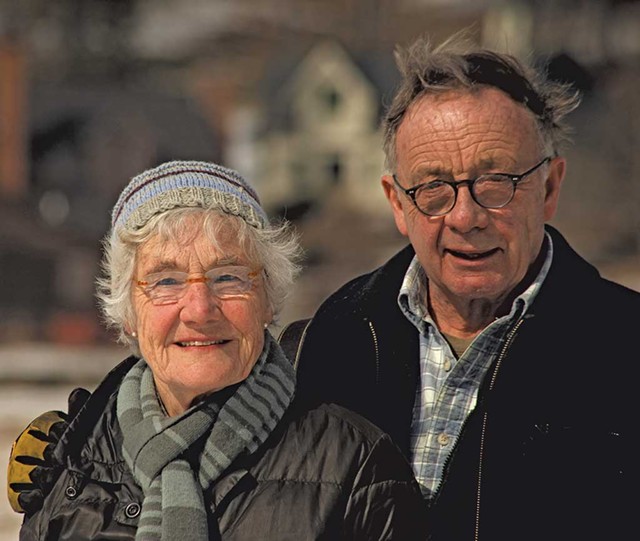 But about three years ago, the Smiths, now in their seventies, realized they wouldn't be able to indefinitely sustain the housekeeping and routine maintenance by themselves. So they began work on a succession plan.

Initially, Mark says, they assumed one of their three grown children would take over the business. But because their kids' families and employment are diverse and mostly based elsewhere, he and Marijke began exploring other options.

After mulling a conventional development — that is, a standard subdivision that involves selling off parcels of the land piecemeal — Mark says he became keenly interested in the literature on cohousing and permaculture.

"That whole body of knowledge spoke to a much more integrated and community-based mechanism to sustain the land," he says. "It's really a design approach that does a lot of things for the landscape and the people that traditional development patterns don't do."

Diving into the process wasn't difficult for Mark, who served for years on various municipal bodies, including Huntington's Development Review Board, selectboard, school board and planning commission, the last of which he chaired twice. Such involvement gave him the expertise to navigate the various bureaucratic hoops necessary to bring the project to fruition.

Due to its topography, the Commons will be considerably less dense than many traditional cohousing developments.

"We value the idea of a home and not crowding people together," Marijke says. That's resulted in some "pushback" from Vermont's cohousing community, which prefers denser development. But the Smiths hope to retain the "rural village concept" that makes this spot so enticing.

They have also invested considerable time into creating a mission statement, bylaws, design standards and the like — for example, they've mapped out common land for use as future gardens, orchards, pastures, even a community center. That said, much of what the community will ultimately look like will be up to its future residents.

They'll include Steve Hood, 65, one of the Commons' first investors. He and his wife had been looking for a home or property to build on in Huntington for the last five years when they chanced upon the Smiths.

"Initially we had no interest or intention of joining a structured cohousing community," Hood admits. "But this appeals to us on a bunch of levels."

Hood, who's already had a hand in shaping the orientation of his lot and the design standards, says he's surprised these lots haven't sold out already.

"We were looking for real value," he adds — both in community and real estate. "If you read the bylaws and mission statement, you can really see the values that Mark and Marijke bring to this project."

For his part, Mark expects interest will grow once more potential investors learn about their plans.

"I've lived a long time and done a lot of things, but nothing has captured my imagination like this project," he says, as he surveys the land from a vantage point high above the valley. "It gets to the heart of my values about community and preserving open space for future generations."

The original print version of this article was headlined "Farm Futures"