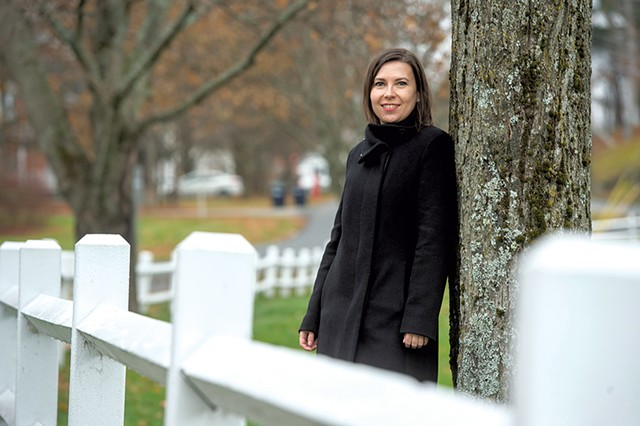 Among the various professionals recruited to work in national security, law enforcement and counterterrorism, linguists usually don't rank high on the list. Those with advanced degrees in linguistics are far more likely to find careers in education, law, journalism, marketing, and speech and language pathology. But linguist Eszter Szenes has chosen to focus her attention on the words and symbols that neo-Nazis, white supremacists and other far-right extremists use to incite violence.

Szenes, 40, is a visiting research fellow from Central European University in Austria and Hungary, who holds a doctorate in systemic functional linguistics from the University of Sydney in Australia. The Hungarian native will spend the next two years at Norwich University's Peace and War Center analyzing the online language and symbolism used in far-right disinformation and propaganda campaigns.

Szenes hopes that her research will help law enforcement and counterterrorism experts more easily identify individuals who are at risk of becoming radicalized. Ultimately, though, she'd like to create educational tools that counter violent right-wing extremist campaigns before they take root and fester. It's daunting and sometimes dangerous work, Szenes acknowledged in a recent interview, in an era when right-wing messages spread across international borders at lightning speed, and when those who are trying to slow that spread sometimes find themselves the targets of extremists.

The timing of Szenes' arrival at Norwich, the nation's oldest private military college, seems opportune. She began her research this fall just as the U.S. elections were reaching a fever pitch and after four years of a norms-busting president who frequently adopted the right-wing nationalist rhetoric of authoritarian rulers around the world.

Szenes' two-year residency also begins as the U.S. is experiencing a spike in right-wing violence. According to a 2019 report by the Anti-Defamation League's Center on Extremism, far-right groups in the U.S. were to blame for nearly three-quarters of all extremism-associated homicides in the last 10 years.

But Szenes' interest in far-right radicalization was motivated more by disturbing trends in her native country over the last decade. She was only 9 years old in 1989 when Hungary's electrified border fence with Austria came down — the first chink in the armor that presaged the fall of the Iron Curtain and the collapse of the Soviet Union.

Hungary enjoyed a flurry of democratic reforms throughout much of the 1990s, but some began to get rolled back with the ascendance of Viktor Orbán as prime minister in 1998. Since the start of his current term in 2010, Orbán has overseen what international observers describe as the country's steady decline into authoritarian rule.

"In Hungary it's been quite a slow but deliberate process of dismantling democracy by taking over more and more public institutions, like public media and court systems, and changing the constitution and creating laws that allow the government to stay in power essentially forever," Szenes explained. "And once you own the media, you have a very powerful tool to create propaganda to brainwash the masses."

Indeed, on the day of Szenes' interview with Seven Days last week, Radio Free Europe / Radio Liberty broke the story of a scandal involving Hungary's publicly funded broadcasting agency. A leaked recording of the senior news editor, made in the run-up to the 2019 European Parliament elections, revealed that broadcasters were being coerced into creating anti-migrant propaganda; if they didn't comply, they risked losing their jobs.

A leaked internal email also revealed that broadcasters were prohibited from discussing LGBTQ issues, climate change and international migration, and even using the word "refugee."

"If you create a disinformation campaign on purpose and deliberately repeat it a thousand times, people start to believe it," Szenes said. "So it definitely creates the conditions of people becoming suspicious of foreigners and people who are not like them."

Traditionally, the field of linguistics has not had a branch that specialized in the language of right-wing extremism or white nationalist propaganda, Szenes explained. Nevertheless, because English has become the lingua franca of many extremist groups, it provides Szenes, who had planned to become an English teacher before switching to linguistics, with an opportunity to analyze the "linguistic mechanisms" extremists use for online recruitment and disinformation.

Specifically, Szenes studies the words and phrases used on the internet by right-wing extremists to manipulate people's emotions — anger, frustration, fear — about their economic hardships, and then to co-opt local grievances regarding, for example, mass immigration and the loss of jobs to foreign-born workers. These efforts create "alignment" with extremists' particular ideologies.

"It always gets back to the same old conspiracy theory." Eszter Szenes tweet this

While those ideologies vary somewhat from group to group and from country to country, Szenes said, most center on conspiracy theories about a secret world government that controls the banks and other institutions of governance.

"It always gets back to the same old conspiracy theory," she said. In the 1930s, Adolph Hitler adopted centuries-old anti-Semitic tropes to rail against a secret Jewish cabal that controlled the world's financial institutions. "Today it is George Soros," she added, referring to the Hungarian-born billionaire and philanthropist of Jewish descent who has become a lightning rod for far-right radicals.

Szenes emphasized that not all far-right ideologies are considered extremist. She differentiates between garden-variety conservatism and right-wing extremism based on an individual or group's willingness to advocate or condone the use of violence as a means to address societal woes.

Researchers who analyze right-wing propaganda sometimes speak about it in terms analogous to the spread of a contagion: In most cases, a single exposure isn't likely to result in an illness. Rather, it's the repeated exposures to propaganda, she explained, especially when online users dwell in the "echo chambers" of the far right, that creates the conditions that allow these ideas to take root.

The COVID-19 pandemic and the economic downturn it's caused have further fueled the spread of such conspiratorial rhetoric and ramped up fears about secret government plots to manipulate the populace.

Though Szenes' research has obvious applications in the world of counterterrorism and law enforcement — such as creating lists of red-flag words, phrases and symbols that can help identify individuals who are becoming radicalized — she said that, long term, she'd prefer to focus on prevention. As she put it, "It's not dissimilar to medicine. It's much easier to prevent a disease than to cure it."

Central to that effort, she explained, would be creating educational programs and curricula that teach young people critical thinking skills, perhaps in grade school or earlier. Szenes pointed out that today's youth need to be taught digital literacy that includes the ability to recognize disinformation and the language of online manipulation. For example, she said, if young people come across the word "Jews" written in all capital letters in the headline of a purported news story, she said, they need to recognize that "no self-respecting expert or publication" is going to publish a story in that way.

By any measure, Szenes faces an uphill battle and potential risks. So far she hasn't experienced any threats herself, she said. But she noted that some of her colleagues doing similar work in Europe have been doxxed — that is, had their private identifying information hacked and published online — by far-right extremists and Jihadists.

Szenes also recognizes the seemingly insurmountable challenges of taking on not just the extremists themselves but also the social media algorithms that constantly push out their toxic content.

"There are days when I feel like this work is just a drop in the ocean and we can't keep up with the amount of disinformation that keeps spreading," she said. "Until the government insists on some kind of regulation on tech giants for controlling fake news and the spread of disinformation, I think it's a really difficult task for researchers to deal with."