A Homebound Writer and Mom Finds the Need to Knead 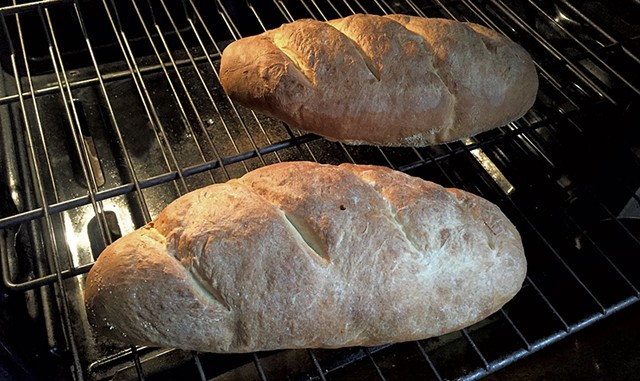 When I came home from Costco a few weeks ago loaded with toilet paper and wine, I joked to my neighbor that I was ready to shelter in place. But the concept of social isolation was getting serious a few days later when I stood in the baking aisle at my local grocery store, feeling compelled to buy yeast.

You don't bake bread, I told myself, as an internal conversation ensued.

It just seems like I should buy yeast. We've got to be ready to hunker down and stay put. With yeast, flour, water and salt, we can make bread. People have done this for millennia.

So I bought the yeast, a single strip of three quarter-ounce packets. I soon wished that I had bought more. I baked three loaves of bread within a week. Needing to restock flour and yeast, I found that Market 32 and Shaw's were out of both. Later, reading comments posted on a King Arthur Flour bread recipe, I noticed that many of them were recent. Everyone's baking bread, I thought.

A phone chat with company reps confirmed it. Traffic to King Arthur's website was at record highs. Perennially most-searched recipe Easy Cheesecake had been booted to No. 18. The top 15 were all bread related.

Ha! my savvy-shopper self gloated to She Who Dared to Question. So baking bread was a good idea.

Actually, I've long wanted to master baking with yeast. Years ago, I even harbored the notion of baking all of my family's bread. I also planned to clean out the attic as soon as all four of my kids were in school. The youngest will graduate high school in three years, but the attic is still packed, and bread making still strikes me as an elusive art, a mystical alchemy of science and secrets gradually revealed over time.

But I'm diving in. And it's not because I think stores are going to run out of bread; I just feel compelled to make my own. It's part nesting, part therapy and part proving that, despite being laid off, I can still produce something useful.

However you psycho-slice it, the virus shooting around the globe triggered my baking instinct.

Once colleges shifted to online classes and my daughter returned home, all of my hatchlings were back under my wing. Not only home but virtually forbidden to leave the nest. Instantly, I started flitting about — tidying, sweeping, scrubbing, vacuuming, spritzing, shining. If we're going to be housebound around the clock, I thought, it should feel nice to be here. And safe: Those spray bottles are filled with bleach water.

And there are mouths to feed! The first two days, I whipped up two loaves of pumpkin bread and veggie lasagna. More than ever, feeding my family wholesome, homemade food feels paramount — though not necessarily to them.

In addition to my daughter in college, I have three sons in high school. One of them teased apart that lasagna, curled his lip and scoffed, "Are those carrots?" He and his brothers eat a lot of scrambled eggs, cold cereal, and boxed mac and cheese. But even they are now baking. The carrot hater made lemon bars, and one of his brothers has made Ina Garten's sour cream coffee cake three times.

My husband, who had never in his life made a batch of cookies, stirred up Joy the Baker's brown butter chocolate chip cookies, and my daughter made them a few days later.

Yes, baking is something to do, but for me it's more than that. It's an attempt to keep harm at bay and to maintain some sense of control. While the coronavirus swirls around out there, I need to feel safe in here. Disinfecting doorknobs and light switches provides some peace of mind; baking provides an opportunity to nurture. Bonus: aromatherapy.

Much, of course, is out of my control. My dad lives in a nursing home in the Midwest. He's 89 and frail, and it seems like he's in a tinderbox. I can't protect him. I can't visit him. But I can call and I can write letters.

I also can scoop flour into a measuring cup, tap the side so it settles and then level it with a knife, the way my mom taught me. I can pack brown sugar into a measuring cup and then admire the clean, exact shape it retains after it falls into a mixing bowl. I can slide a teaspoon up the side of a baking soda box to fill, pack and smooth it in one precise motion.

Baking is therapy, agree many of the thousands now posting on Instagram with hashtags such as #coronabaking, #stressbaking and #quarantinebaking.

Experts agree, too. "Baking has the benefit of allowing people creative expression," Donna Pincus, an associate professor of psychological and brain sciences at Boston University, told HuffPost in 2017. "There's a lot of literature for connection between creative expression and overall wellbeing."

Baking, Pincus continued, is an exercise in mindfulness and can reduce stress. "Baking actually requires a lot of full attention," she said. "You have to measure, focus physically on rolling out dough."

Kneading bread is a meditation. You fold the dough toward yourself, push it away with the heels of your hands, turn it 90 degrees and do it again, over and over, while inhaling the earthy, nutty smell of yeast.

So many people are doing more important things than I am during this pandemic. They're taking care of the sick and the elderly; hustling to develop vaccines, medications and ventilators; driving buses; running grocery stores and pharmacies; and riding a 24-hour torrent of breaking news to keep us informed. I stay home and keep my kids at home. I help them study for math tests and edit some of their essays. But really, they don't want much help.

It's my nature to feel like I am never doing enough. I've now baked five loaves of bread. (I struck gold when I found a one-pound block of vacuum-sealed yeast at Market 32. And then flour — all-purpose and bread flour — at City Market, Onion River Co-op.) A run on staples is sure to be one of the lasting memories of COVID-19. This pandemic is historic, heartbreaking and scary. And we can't see the end yet.

But when bread hits the oven in my kitchen, instantly — if temporarily — all smells right with the world.