A Gunshot Survivor Aims to Secure Background Checks in Vermont 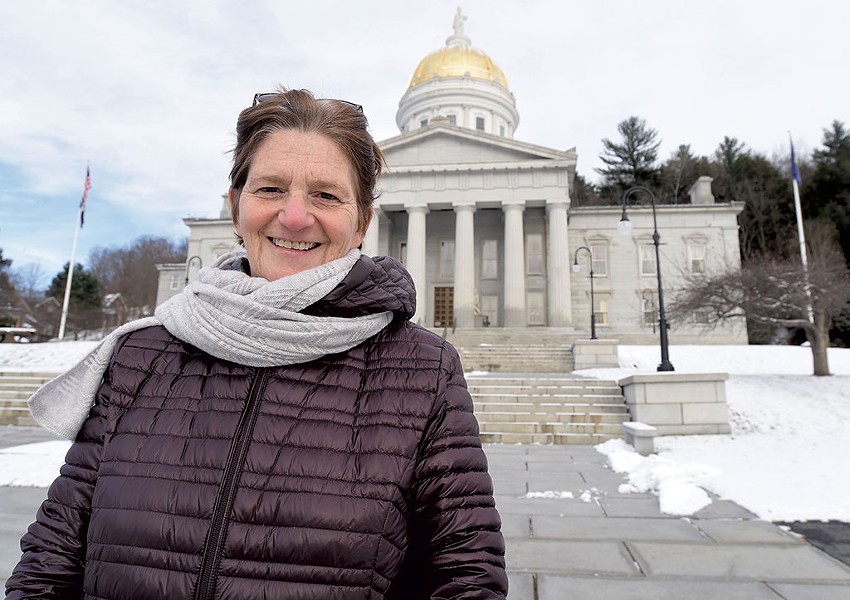 The new leader of Gun Sense Vermont understands gun violence better than most. When Clai Lasher-Sommers was 13, her abusive stepfather shot her in the back with a high-powered hunting rifle. Forty-seven years later, lead shrapnel is still working its way out of her body, leaving sores on her skin as it surfaces.

Earlier this month, Gun Sense Vermont announced that Lasher-Sommers, 60, will serve as its acting executive director, replacing Ann Braden, the group's founder and, for the last five years, the driving force behind the state's only organization devoted to gun control.

This leadership change raises key questions for the nonprofit and its battle to pass gun-safety measures in a state fiercely protective of the right to bear arms. Can Gun Sense Vermont survive Braden's departure? Will Lasher-Sommers, a longtime activist and farmer who lives in Westmoreland, N.H., be able to revive its faltering quest for universal background checks?

"She is fearless, she is tenacious and she has been working on this issue for her entire life," said Braden.

Gun Sense Vermont began when Braden, a mother of two and a former middle school teacher, started a petition for universal background checks in 2012, in response to the mass shooting at Sandy Hook Elementary School in Connecticut that left 26 dead, 20 of them children.

After collecting 12,000 signatures, she delivered the petition in March 2013 to then-governor Peter Shumlin and held a press conference at the Statehouse. Shumlin was not receptive, but Braden, undeterred, began regularly driving from her home in Brattleboro to Montpelier to lobby for background checks and other gun-safety measures.

Licensed firearms dealers are required to perform the checks in Vermont, but buyers can easily purchase guns online, at gun shows or from private individuals without submitting to any scrutiny.

After two years of acrimonious debate, Braden won two modest victories. In 2015, the Vermont legislature voted to mandate that mental health professionals submit information to a federal database of people who are prohibited from purchasing guns because they are at risk of harming themselves or others. Replicating a federal law, state legislators also made it a crime for felons to possess guns, which enabled local police to enforce the prohibition.

Gun Sense Vermont has grown to a 5,000-member organization, but its central goal remains unrealized. A universal background check bill is still "on the wall" in the House, meaning it's tacked to a wall in the Judiciary Committee conference room and hasn't yet been taken down for discussion. Legislation on the Senate side hasn't fared much better. Senate Judiciary Committee members discussed the bill in 2015 but, in a straw poll, voted 3-2 against sending it to the full body for a vote.

As these bills have stalled, so has Gun Sense Vermont. Without a clear path to achieving its raison d'être, the group has been "a bit dormant in the past year," in the words of board president Elissa Pine of Brattleboro.

Braden, who offered a similar assessment, said she decided to step down because she is preparing to run for office — likely a state Senate seat — and publishing a novel.

Her successor, Lasher-Sommers, has been a fellow at Everytown for Gun Safety, an organization founded by former New York City mayor Michael Bloomberg after Sandy Hook. She has lobbied for gun-control measures in New Hampshire's Statehouse and has served on the board of Gun Sense Vermont. Last year, after then-U.S. senator Kelly Ayotte of New Hampshire declined to meet with gun-control advocates, Lasher-Sommers traveled to Washington, D.C., and crashed the lawmaker's Coffee With Kelly constituent event. She asked Ayotte to hold a town hall meeting on guns in a cordial but unsuccessful attempt to force the issue.

Perhaps Lasher-Sommers' most powerful asset is her own story.

When Hillary Clinton made a stop in Keene, N.H., while campaigning for president in 2015, Lasher-Sommers was her warm-up act. Wearing a brocaded jacket and holding a microphone, the New Hampshire farmer strode back and forth as she described her own grisly encounter with guns. In a video of the event posted on C-SPAN, members of the audience look stunned.

Lasher-Sommers was born in Bellow Falls but moved across the border to Spofford, N.H. She lived with her mother, brother and a stepfather. The latter, she said, routinely beat and threatened to shoot the other three.

"He would hang me against a wall with a gun against my throat," she recalled during an interview last week. When Lasher-Sommers returned home from a friend's house on a snowy afternoon in January 1970, she could tell her mother and stepfather had been drinking. Lasher-Sommers and her brother tried to keep a low profile as they heated Beefaroni for dinner but couldn't avoid their stepfather's rage.

She had run to her bedroom and almost closed the door behind her when her stepfather pulled the trigger on his .30-06 rifle, hitting her in the back. If the bullet hadn't first grazed the door, she believes she would have died.

Lasher-Sommers spent six months recovering at what is now Dartmouth-Hitchcock medical center; after she was released, she cycled through foster homes until she was 17.

Her stepfather was convicted of aggravated assault, according to Lasher-Sommers.

Today, she grows herbs and vegetables at New Dawn Farm in Westmoreland, not far from where she was shot.

What can Vermonters learn about gun violence from her story?

"It happens everywhere," Lasher-Sommers responded. "We just have to not think that Vermont is an island."

Having lobbied in New Hampshire, which, like Vermont, has a strong hunting tradition and weak firearms laws, she is no stranger to intransigence toward to new gun regulations.

But the fact that she doesn't plan on moving to Vermont could become a liability. Lasher-Sommers points out in her defense that she was born in the Green Mountains and lives just 12 miles from Brattleboro.

Still, gun-rights proponents have long characterized the gun debate as liberal hippies versus real Vermonters. Braden, a native of Connecticut, took heat for being an outsider, despite living in Vermont since 2006.

Lasher-Sommer's state of residence is the first thing Ed Cutler, president of Gun Owners of Vermont, pointed out when asked about her. "If they're going to claim to be a Vermont organization, their leadership ought to be Vermonters," he said.

The second thing he had to say about her: "We consider her a professional victim."

In addition to weathering criticism from the opposition, Lasher-Sommers will have to contend with a reluctant legislature. Even though a 2016 Vermont Public Radio poll found that 89 percent of Vermonters support universal background checks, it remains unlikely that lawmakers will approve the proposal anytime soon.

"I am working as hard as humanly possible to get my universal background checks bill out of the Judiciary Committee," Sen. Phil Baruth (D/P-Chittenden) said. "To be frank, the debate is literally being impeded by a 3-2 vote in that committee."

Sen. Dick Sears (D-Bennington), who chairs the committee and was among those who voted no, knows Baruth is frustrated. He said he'll hold hearings on the bill, but as for the 3-2 vote, "I don't see that changing."

It's not clear whether the background check bill would pass in the Senate, but "it has to be pushed forward even if it's painful and annoying to others," Baruth maintained.

The proposal's prospects look even poorer in the House, where cosponsor Rep. Michael Mrowicki (D-Putney) said, "I would certainly like to get a vote on it," but "it might not be this year." He doesn't yet know whether the House Judiciary Committee will even discuss it.

Her predecessor supports that focus. "I really want Gun Sense Vermont to be a long-term sustainable force in the state," Braden said. She believes her departure will help by prompting the organization to build a deeper leadership bench.

Board president Pine is on the same page. During a short interview, she used the word "sustainable" at least five times. "We want to be less dependent on riled-up individuals and have something people could step in and out of that is sustainable."

But even as the organization turns inward, its sights remain set on the end goal: universal background checks. "The movement is growing," Lasher-Sommers said. "I think Vermont is gonna get there."