A Guide for Identifying Trees During Stick Season 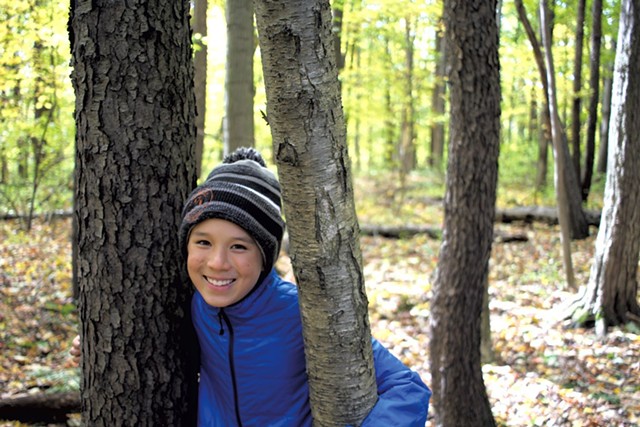 There's usually a point each November when Vermont seemingly transforms from fall to winter overnight. One day the leaves are vibrant hues of red and yellow. Then the wind blows or the rain falls, and the trees turn brown and become almost bare. It's easy to disparage stick season, but there's still beauty to be found.

I love looking closely at deciduous trees this time of year. One of my professors in graduate school said he preferred identifying trees without the "distraction" of the leaves. And I agree; the individuality of their bark and buds is truly amazing. (Yes, there are buds in the fall! They just swell and become more visible in the spring.)

I try to reign in my arboreal enthusiasm around my 11-year-old son, Jesse, lest I overshare and lose his interest. My strategy for helping him learn about things he may not want to take as much time with as I do? If a tree catches your eye, break a twig off and put it in your pocket. Then, use this quick-and-dirty guide I've created to help identify Vermont's most common deciduous trees using their buds and bark once you get home. You will figure out what kind of tree it is, and your kids will see you modeling curiosity and following through. They may also become more interested in tree ID once they're back in the warmth of the house.

One interesting tidbit: It's much easier to identify trees in the woods than it is on the street. Street trees can include all kinds of horticultural varieties and species that you won't find in the woods.

Once you have learned to recognize different trees, they become, in the words of nature writer Donald Culross Peattie, "like the faces of your friends."

Guide to the Most Common Deciduous Trees in Vermont's Upland Forests 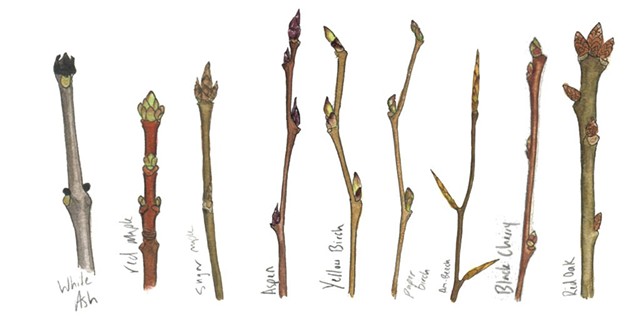 It can be easy to get lost in the details, so I have put the feature(s) I find easiest to clue in on in parentheses at the end of each description.

If the branches are opposite (two buds or branches sprout from the same spot on the twig or branch — think of two arms coming off the twig from the same point), there are only two trees it can be — maple or ash:

White ash is our most common ash. It has big, thick twigs with buds that look a bit like deer antler nubbins. Bark is described as ropy or braided. (OPPOSITE/BUDS/BARK)

There are a lot of maple species. The most common are:

Sugar maples have brown, pointy buds that remind me of pencil tips. (OPPOSITE/BUDS)

Red maples have rounder, red buds. The bark breaks in concentric circles, which, with a little imagination, look sort of like bulls-eyes. (OPPOSITE/BUDS/BARK)

If the branches are alternate (buds or branches sprout in a staggered pattern on twigs and branches) there are more possibilities:

Paper birch, also called white birch, has unmistakably bright white, smooth bark that peels from side to side. (BARK)

But you could confuse it with other light-colored trees:

Beech—this smooth bark is grayer and doesn't peel (though if the tree has beech bark scale disease, it can have a coating of white scale insects or cankers on the bark). Buds are orange and, with imagination, look like cigars. Pale orange leaves can hang on for much of the winter. (BUDS/BARK)

Aspens (also called poplars) have variable amounts of greenish-white bark—sometimes just at the top of the tree — but even when they are whitish farther down the tree, they are not as white and have pockmarks with horizontal lines through them. Buds can be large and sticky. (BUDS/BARK)

The texture of yellow birch, another type of birch, will remind you of paper birch, but this one's more of a golden color. If you peel off a tiny bit, you'll smell wintergreen. (BARK)

Then there are the alternate trees with darker bark:

There's red oak, where, with imagination, you can see snaking lines that look like ski trails in the bark. Oaks have a lot of buds bunched at the ends of their twigs. (BUDS/BARK)

Black cherry twigs look a lot like birch twigs, but they have a bitter almond smell. Its bark is said to look like burnt potato chips. (BARK)

This list will get you pretty far, but if you want to learn about evergreens, shrubby understory trees, and unusual species, easy-to-use books include Winter Tree Finder by May Watts and Tom Watts (which fits in a back pocket!) and A Beginner's Guide to Recognizing Trees of the Northeast by Mark Mikolas.