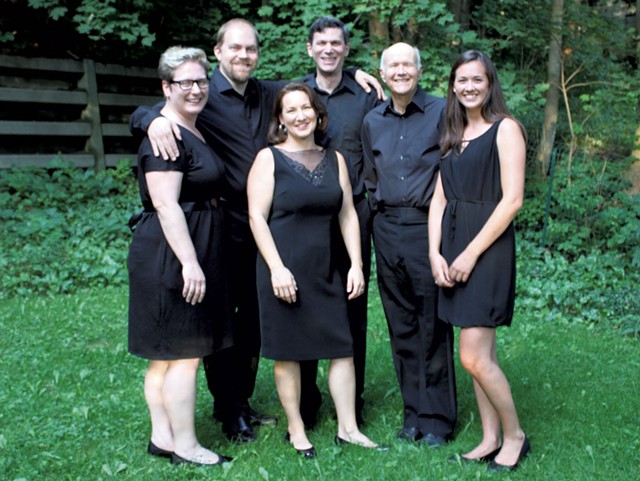 It's September, so it must be time for a concert by the Green Mountain Monteverdi Ensemble of Vermont. Once a year, founder and bass singer Stephen Falbel gathers a handful of singers and instrumentalists for an early-music concert featuring his favorite composer, Claudio Monteverdi.

"I always joke that we're looking for a rich person named Greenberg to fund the group so we can name it for that person, as well," says Falbel. (Berg is German for "mountain.") "We try not to take ourselves too seriously."

Falbel, a rather serious Harvard University graduate and public-transportation planning consultant, lives in Montpelier with his wife, Lindsey Warren, a soprano and pianist who teaches from her home studio.

Falbel studied philosophy and German at Harvard — "of course, the natural lead-in to transportation and music," he jokes — but he also sang in the Harvard Glee Club, which focused on Renaissance music. "I fell in love with it then," Falbel notes. "I've always loved that period, up to and including baroque music and [Johann Sebastian] Bach."

While living in Boston, Falbel sang in the Tanglewood Festival Chorus and an early-music ensemble. He also met Burlington native Scott Metcalfe — founding director of Blue Heron — and other key figures in that city's rich early-music scene.

After moving to Vermont, Falbel met Warren when both were hired to sing solo parts with the Onion River Chorus, a Montpelier-based community choir. He founded GMMEV in 2012 with its first program already in mind. Falbel credits Metcalfe's friend Dana Maiben, a baroque violinist on the music faculty at the Longy School of Music of Bard College, with the name.

GMMEV's concerts this weekend, on Friday and Saturday, September 6 and 7, in Burlington and Montpelier, respectively, are titled "Music of Love and War: Monteverdi and Schütz." The program includes a selection of Monteverdi's madrigals from his eighth book and works from Heinrich Schütz's Symphoniae Sacrae II.

Monteverdi (1567-1643), who is credited with inventing opera, revolutionized the vocal harmonies of Renaissance polyphony, practically defining the baroque. He wrote his eighth of nine books of madrigals late in life while serving as maestro di cappella at St. Mark's Basilica in Venice. Schütz (1585-1672), perhaps the most important German composer before Bach, was his student there.

Generally, the ensemble performs with only one voice to a part to better elucidate the music's textual meaning and expressiveness. ("So if I have music with six voice parts, I have to find six singers," Falbel says.) Some voice parts are doubled in this weekend's concerts, which feature sopranos Warren and Molly Clark, contralto Carolyn Dickinson, tenors Adam Hall and Erik Nielsen, and bass Falbel.

Accompanying the singers are violinists Jesse Irons and Emily Dahl Irons, a couple who play in the acclaimed Boston early-music ensemble A Far Cry. (Jesse is from Berlin, Vt.) They are joined by Douglas Freundlich on theorbo — an instrument resembling an oversize lute with a towering neck — and Alice Robbins on baroque cello.

Warren, who studied early music at McGill University, also plays harpsichord and sings in the trio Atlantis Baroque. She occasionally helps Falbel program GMMEV's music. Of this program, she says, "It's captivating to the ear because it's such gorgeous harmony, and both composers have a lot of contrast in their music — a variety of textures."

Some classical fans may be surprised to learn that Brookfield composer Nielsen is also a tenor. Before he moved to Vermont in the late 1980s to focus on composing, he sang in professional choirs and was a paid section leader in several church choirs, he says.

"I've always loved pre-1700s music," Nielsen comments. "Monteverdi and [Thomas] Tallis in particular have influenced me a good deal in my writing — which is not unusual among composers."

Nielsen recalls listening to his parents' recording of Monteverdi's Vespers of 1610. "This was long before the early-music craze, and I just fell in love with it. The music is transcendent. He uses these long lines of plainsong as an organizing unit and sets other lines against them.

"Monteverdi is a towering composer," Nielsen continues. "He almost singlehandedly brought the Western world from the late Renaissance into the baroque. He synthesized the old contrapuntal music with harmony. Also, he uses really large ranges for each singing part. It's very expressive and dramatic.

"Schütz is not up at the top of my list," he adds, "but it's all personal taste, right?"

Whatever audiences' tastes, Warren promises "a big mix of pieces for soloists, duets and full ensemble. And we've got a great band."