Since the 1930s, the little yellow building next to Middlebury's Town Hall Theater has gone by many names: the Val-Do-Mar, the Park Diner and Steve's Park Diner. In 2014, it became known simply as the Diner. Under new owners Caetlin Harwood and Carl Roesch, the greasy spoon is decidedly less greasy — and more gourmet.

The married duo met while working at Vergennes' luxe Basin Harbor Club. Though there's nothing fancy about the down-home fare and no-frills setting of the Diner, Roesch's cooking reveals an inventiveness and attention to detail more commonly found in fine dining.

Seasoned to perfection, the burger here is served on a golden and glistening challah roll. Add bacon; it's griddled to a satisfying, fatty shatter. Roesch's homemade hot sauce — a nod to his native South African cuisine — packs a wallop. With finely chopped yellow, red and green peppers, it resembles a multicolored giardiniera and adds serious heat to burgers, eggs and crisp sweet-potato fries.

The Yum Yum Naan needs no such condiment. Filled with tangy, garlicky pulled beef and crunchy Asian slaw, the warm pita has plenty of punch on its own. 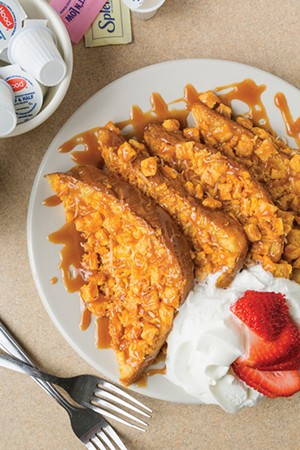 The eclectic menu extends to breakfast, at which the Diner truly shines. Take a seat next to an old-school mural of short-order cooks, waitresses and hungry guests, and order a stuffed French toast. The Elvis predictably includes the King's favorite combo: peanut butter and bananas. A clever twist on jalapeño poppers, the Popper melds cream cheese, bacon and jalapeño jam in a sweet-and-salty French toast.

Pulling double duty, the Captain could easily sail at breakfast or dessert. Drenched in a cinnamon-speckled batter and drizzled with buttery caramel, the toast melts inside a crackly coat of coconut flakes and Cap'n Crunch cereal. On a menu full of elevated classics, this sugar high soars.

For most of a century, loyal customers have relied on this space for morning meals of coffee and toast. Dishes at the Diner are nothing like those breakfast basics — they're better.

Speaking of Middlebury, The Diner