'A Girl in the Race'? Sue Minter Weighs a Run for Governor 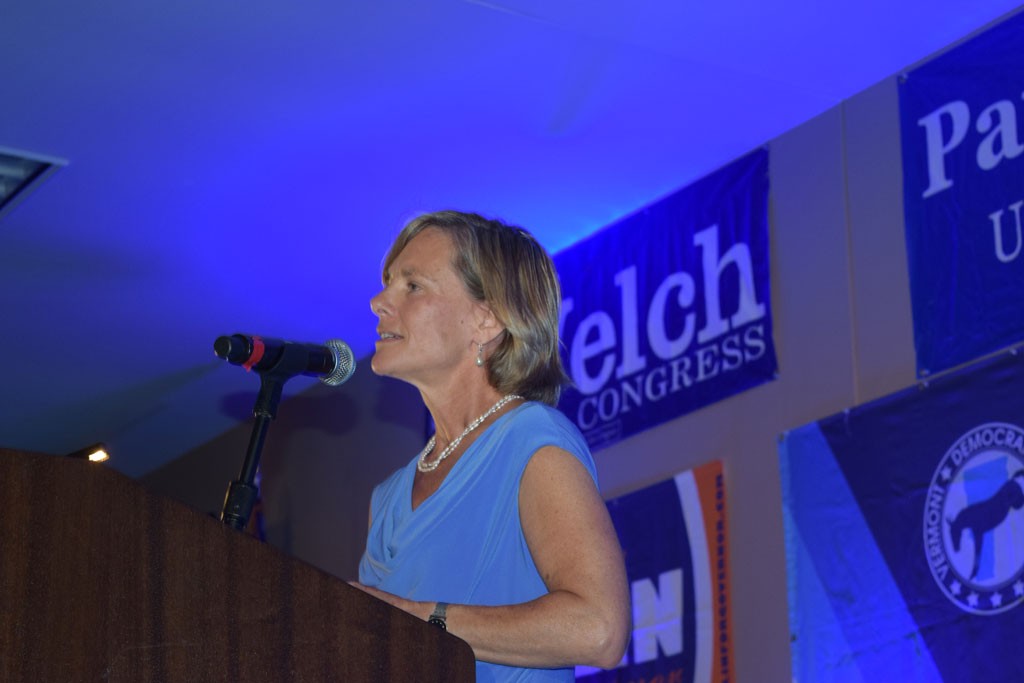 Thirty-eight years ago, high school junior Sue Minter moved with her family from Philadelphia, Pa., to Providence, R.I., and enrolled at the Moses Brown School.

The centuries-old Quaker prep school had just turned coed, and Minter's female classmates thought a girl should run for student council president. The next year, she did — and won.

Three and a half decades later, Minter is facing similar pressure to run — this time for governor of Vermont.

"I have been encouraging her," says Madeleine Kunin, a Democrat who became Vermont's first and only female governor 30 years ago. "I do think she's well-qualified."

Few women have ever held higher office in Vermont. Though their ranks in the legislature have grown in recent decades, the list of potential candidates to replace retiring Gov. Peter Shumlin in the November 2016 election includes mostly male names: Phil, Matt, Randy, Shap, Bruce, Scott, Doug, Dan and so on.

Kunin and others are determined to put women's names on the list. For now, the former gov's main focus is Minter.

Minter, who flirted with a lieutenant gubernatorial run in 2014, may go for that office, governor or neither. She says she enjoys the job she has — managing Vermont's second-largest state agency — but keeping that job would require the confidence of the next governor, who could be a Republican. Minter says she'll make up her mind in September.

Behind the scenes, critics whisper that Minter lacks the name recognition and political experience to wage a statewide campaign. Some Democrats would prefer she run for lieutenant governor.

Kunin, who served two terms as lite gov on her way to three terms as governor, is telling Minter she doesn't have to settle for second fiddle.

"For me, lieutenant governor was the first step to learn how to run a statewide campaign," Kunin says. "I don't think it has to work that way."

The former governor's message appears to be resonating with the maybe-candidate. These days, Minter sounds less enthused about running for the No. 2 job, which comes with few specific powers other than presiding over the Senate.

"I'm not sure going to an office with no authority and one staff person is going to ... utilize my abilities in the best way," Minter says.

Kunin says she's not pressuring Minter to run for governor — just trying to help her work through the decision.

"I try to be honest with her," Kunin says. "There are some tough points, but I think you can really have an impact. I basically tell her she's qualified to do the job."

One roadblock for the transportation chief: Unlike other potential candidates, she'd have to quit her day job.

In a memo Administration Secretary Justin Johnson sent state agency and department heads last week, he wrote, "Gubernatorial appointees may not simultaneously be employed by the state and be a candidate in a partisan election."

Minter agrees that doing so would be a conflict of interest.

"I would absolutely need to give up my job even to begin raising money," she says.

Minter's experience as a cabinet member is a key credential, but it's not without downsides. Last week, three former Agency of Transportation employees filed suit against the state, alleging that they faced discrimination for being gay. The allegations predate Minter's tenure as secretary but coincide with her time as the agency's second in charge.

The dearth of Vermont women in top elected jobs is well documented. Though the state boasts the highest percentage of female legislators in the nation, only one woman, Treasurer Beth Pearce, currently holds a statewide elected position. Vermonters have never elected a woman to represent them in Washington, D.C. No woman has ever served as Senate president pro tempore, the most powerful position in that chamber. Even über-progressive Burlington has failed to elect a single female mayor.

Minter, who served six years in the legislature, says she thinks that's because running a statewide campaign is daunting.

"It's a big leap," she says. "It's going to take a lot of time to fundraise. There's pressure to be very clear on issues."

Is it more daunting for a woman?

Kunin, who's written books on the subject, says that while men automatically think they're qualified to run, women usually need more encouragement.

Sen. Diane Snelling (R-Chittenden), a 14-year veteran of the chamber, isn't eyeing higher office. But she's watched her father, Richard Snelling, and her mother, Barbara Snelling, win election as governor and lieutenant governor, respectively. She's found that her female peers aren't convinced they have all the answers.

"Women feel like they need to have all the information before they talk about something, whereas men talk based on what they know," says Snelling.

Women also tend to question whether they can win over established power brokers whose help they think they need, says Sarah McCall, executive director of Emerge Vermont, a Democratic organization that trains prospective female candidates.

And women are more concerned than men about how running for office would affect their families, according to female pols who spoke with Seven Days.

House Majority Leader Sarah Copeland Hanzas, a 45-year-old mother of three from Bradford, says she wouldn't consider statewide office until her children are older. "I'd like to be a present parent," she says. "That gives me a couple years."

What about House speaker, a powerful position likely to be up for grabs in 2017? Vermont has had just two female House speakers in its 224-year history.

"That's something I might need to give consideration to," she says.

Minter says she willingly put her career on hold when her children were young. Now, she says, her husband has taken on a greater share of the parental responsibilities while she works full time.

Still, Minter says, family is a big consideration as she contemplates running for governor.

"It would be a huge commitment of myself and my family," she says. "Those are big decisions."

As she ponders them, Minter can't help but to think back to her high school days at Moses Brown, class of 1979. She was one of 11 girls in her grade — in a school that didn't have designated girls' locker rooms or sports teams until Minter and her female classmates helped make them.

"I ended up having to lead in a lot of ways there," Minter says.

Even when she was persuaded to run for student council president, she was not expected to win.

"It was literally to make sure there was a girl in the race," she says. "There was a mixture of jealousy and dismay."

Minter's not the only potential gubernatorial candidate keeping her cards close to her chest. The state's full of politicians pondering runs, but not one will explicitly say so.

House Speaker Shap Smith, a Democrat from Morristown, says he's made up his mind about his future political plans. So?

"I've made a decision, but I'm not going to announce it for a couple weeks," Smith said Monday by phone from Seattle, Wash., where he and other Vermont lawmakers are attending the National Conference of State Legislatures.

In case you need help connecting the dots, someone who's not running is unlikely to wait two weeks to say so.

Here's another hint: Asked if he's raising money, as fellow Democrat Matt Dunne and Republican Lt. Gov. Phil Scott are, Smith said, "I am thinking about that and have been talking to people about raising money."

Again, someone who's not running is unlikely to think and talk about raising campaign cash.

Dunne, who sent a fundraising letter last month declaring that he wasn't yet announcing his candidacy, is sticking to that line. He won't offer a time frame for when he will — even though he's already raised more than $135,000.

"All of the momentum and support to date has been very positive," he says.

Dunne, a Google exec and former state senator from Hartland, says he'll announce details of a statewide listening tour later this week. He plans to visit all 14 counties — something noncandidates don't generally do.

"This is an opportunity to verify some of the themes we've heard," Dunne says.

Scott, who sent his own fundraising letter last month to 20,000 Vermonters, has been equally vague. In the letter, he said he was "preparing to step up and lead."

How, exactly, he didn't quite say — but one doesn't typically spend that kind of money without a purpose. The letter reached so many people that even Smith got a copy.

The speaker says he didn't send Scott a check.

Vermont Republicans got a significant assist last fall as they sought to increase their ranks in the legislature. A national group, the Republican State Leadership Committee, dumped $370,000 into the race, buying TV, radio, print and digital ads.

In the end, the GOP picked up nine seats — its best showing in years.

Now the RSLC is back. Last week, as the Associated Press first reported, the group pledged to spend a record $40 million on legislative races in 10 states, including Vermont. In a press release, thegh organization said it would work toward "ending the Senate Democrats' super-majority" in Vermont.

That might not be too difficult. Counting the three senators who caucus with Democrats and Progressives, the Ds hold 21 seats, while Republicans hold nine. If the Rs won just two more, they'd be able to sustain a gubernatorial veto.

Surprised that a state as blue as Vermont is on the Republicans' target list? Consider this: Democrats control both legislative chambers in just 11 states. Of those, pint-size Vermont is a place where a little money may have the biggest impact.

"We don't want to give away our full playbook for the cycle, but with a popular Republican lieutenant governor and an open governor's seat in 2016, Vermont is ripe for Republican gains in the legislature," says RSLC spokeswoman Ellie Wallace.

The organization's biggest donors are the country's largest corporations and trade groups, including the U.S. Chamber of Commerce, Reynolds American, Blue Cross Blue Shield and Walmart, according to the Center for Responsive Politics.

Its investment has already gotten under the skin of newly hired Vermont Democratic Party executive director Conor Casey, who sent out a press release Tuesday blasting the influx of out-of-state money as "harmful to our democratic process."

Perhaps, but does that mean the Vermont Democratic Party and its candidates are going to send back all the out-of-state special-interest money they get from the likes of Verizon, Amazon.com and Eli Lilly?

No, Casey says, differentiating between money spent on statewide campaign operations and in tiny Vermont House districts. "It's a different playing field. The distinction would be, this is a citizen legislature."

Of course, the political action committee run by House Democrats last year received contributions from some of the same entities funding the national Republican group. Casey draws a distinction: The Democratic PAC is making decisions about how to spend that money in Vermont, whereas the GOP group is an out-of-state organization making decisions about Vermont races.

The original print version of this article was headlined "'A Girl in the Race'?"