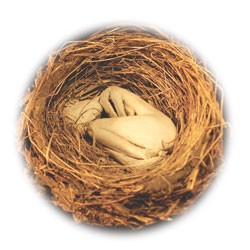 Frog Hollow gallery director Rob Hunter didn’t know artists Carol MacDonald and Erik Rehman were both survivors of sexual abuse when he asked them to participate in a collaboration with Burlington’s Women’s Rape Crisis Center. He knew their work — MacDonald’s evocative prints and knitted works; Rehman’s sensual clay figures, often just faces and hands — and thought it would be perfect for what he had in mind: an exhibit of inspiring artworks based on the stories of Burlington-area survivors of sexual abuse.

Hunter was right on. Rehman’s and MacDonald’s work will be on display at Frog Hollow in Burlington starting April 1, in a show called “Transcendence: Mooring the Storm.” The artists will spend two days a week at the gallery until the end of the month, developing and installing more pieces, until they have a body of work to tour the state. The show will end a year from now as a permanent installation at the WRCC.

Initially, the artists had planned on creating work inspired by the written stories of sexual-abuse survivors. But the eight women and one man who volunteered for the project had a better idea: They wanted to sit down with Rehman and MacDonald and share their stories out loud.

“This is more than I signed up for,” Rehman recalls thinking at first. But it wasn’t long before he realized the art would be much richer for the face time. And that listening to other survivors’ stories would be transformational for the artists, too.

The interviews began last fall. Both MacDonald and Rehman had participated in or led workshops with other survivors in the past, so the territory wasn’t entirely new. MacDonald kept this goal in mind: “How do we honor this person and have them leave [this interview] whole and not a mess?” The artists trained with WRCC director of education and outreach Tony Moulton, who accompanied them at each interview in a “safe space” at the center.

The results, so far, are based largely on dreams that interviewees shared. Rehman, who usually works in clay, has made a few small sculptures: a woman curled in a nest, incubating like a baby bird; two women fused at the waist, holding on to each other’s arms in a seesaw shape, as if mutually drawing strength.

He’s also done a series of pencil drawings, a departure from his typical work. “They’re almost like crime-scene drawings,” Rehman says. In one, a naked woman sits on the edge of a tree stump, using a branch to fish in the dark pool of her own shadow.

In one interview, a woman told the artists that she’d dreamed of a huge cloud of dragonflies swarming around her and transforming her. Both Rehman and MacDonald loved the image, the inherent drama in the life of that insect, which drops into the water as a larva and emerges with wings. Rehman drew a massive dragonfly lifting a fragile-looking, curled-up human body. MacDonald will print images of the insects on silk, which she’ll hang in layers at the gallery.

The man the artists interviewed said he felt like he was missing a piece, so they incorporated puzzle pieces into their work, too. Rehman drew a seated man whose tiny jigsaw bits have come loose and dropped to the floor. MacDonald created a 9-by-160-inch timeline of the healing process: At one end of the print, paper dolls printed with puzzle pieces stand upright, holding hands. As the timeline progresses, they begin to drift apart, their pieces separating.

This is the denial phase, MacDonald explains. “That can go on for a long time,” she says. “Your life, in ways, starts coming apart. At some point it’s just so painful you have to do something about it.” On her timeline, the dolls eventually start reintegrating, with more vibrant colors than before.

One woman told MacDonald and Rehman that her childhood sexual abuse stopped the day she got a lock on her bedroom door. So, MacDonald went searching for a door. She found one in the basement of the WRCC and took it to her studio to scratch it up and cover it in seven layers of paint. Then she cut out the silhouette of a person. She unraveled sweaters her mother and grandmother knitted for her over the years and plans to wrap the silhouette in the yarn.

“In a lot of the stories, there were generations of abuse,” says MacDonald. “People were saying, ‘It’s going to stop here.’”

“Transcendence: Mooring the Storm,” by Carol MacDonald and Erik Rehman. The artists will create some of the work publicly at Frog Hollow in Burlington through April 29. froghollow.org