A 'Frank' Discussion About Non-Fungible Tokens and Cryptocurrency

There sure is a lot of talk about cryptocurrency these days, and NFTs and the like. I couldn't get through 10 minutes of the Super Bowl without some Hollywood actor making fun of me for being a wuss because I wasn't putting all my money into "crypto." That sounds a little too much like a crypt for me to be entirely comfortable. I don't want to put my hard-earned savings into an early grave.

But I've been hearing all the smart people, like Jimmy Fallon and Paris Hilton and Elon Musk, talking about buying doggy coins and bored apes, and I like animals, so I figured I should read up on it. You hate to be the only guy who didn't buy Apple Computer stock in 1989 when it was 5 cents a share or whatever, and you can be damned sure that all the crypto people will be more than happy to remind you about it for the rest of their hopefully short lives. "I told you man. I told you! Hey, want to go to Paris with me and the missus Friday? Oh, I forgot. You don't have the money."

So I read and I read, and I thought I had it mostly worked out, but not quite.

When I was in fifth grade in health class, they separated the boys and girls and showed us a slideshow about reproduction that was full of diagrams with lots of circles and arrows. After it was over, one guy said, "I don't see how it all fits together."

That's how I felt after reading all of the explainers and trend pieces about blocks and chains and tokens.

So I met up with my friend Frank, who's pretty smart. He's got a good little business getting people's basements dry. No pumps or anything; he moves dirt around their yard, and the water just goes somewhere else. Frank has all the business he wants, which isn't very much. Because as soon as he makes enough money for the year, maybe including a mud season vacation somewhere sandy, he stops working and does more interesting things.

The thing is, he's not big on schooling and doesn't even read that much. So he can't ever explain anything to you, unless it involves water, dirt or concrete. But he asks good questions, and somehow after you talk to him for a while you know more than when you started.

Frank actually brought the subject of crypto up because of all those Super Bowl ads. "Wasn't that weird?" he said. "I've never seen anyone advertising money before."

"Well, this stuff is supposed to be money, right?" he said. "The new, worldwide secret money or something?"

"You ever seen a bank advertising money, to make you want it?" he asked, rhetorically. "People already seem to want it pretty well on their own. There's no ads like: 'U.S. dollars are the best! People will work hard for you if you give them these.'" Or, he went on, "'Swiss francs: We know how to keep a secret.'"

I chimed in: "Russian rubles! So much history. Now on sale cheap!"

Frank gave me a look that said, "One step too far, Mark." I get that a lot. But what he said was, "Can you explain to me what a crypto actually is? What do I get for my money?" 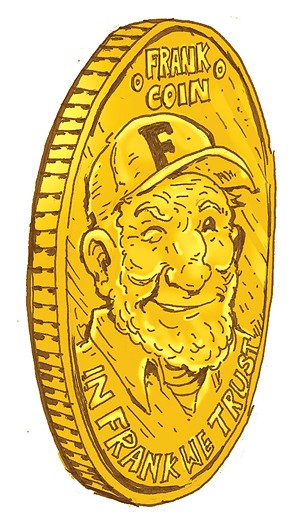 "All of it is based on tokens," I explained, "which are sort of like a unique ID, whether it's attached to a cryptocurrency or an NFT, which stands for 'non-fungible token' and is usually a picture. And there's a worldwide database that keeps track of these tokens and who owns them, except it doesn't have your real name, so it's anonymous."

"Exactly, except it's on this worldwide blockchain database, with an anonymous identifier."

"What if you lose your password?" Frank continued. "Or someone finds it written down on a piece of masking tape on your keyboard?"

"It's pretty much gone, and there's nothing you can do about it."

"So who makes these tokens? How do you know they're not counterfeit?"

"This is the confusing part," I said.

He interrupted, "That last bit was the clear part?"

I ignored his jibe and explained, "That's where the worldwide blockchain database comes in. It's all tracked in there. Computers doing a whole bunch of complicated calculations to mine a crypto token that can be verified."

"Sounds like a lot of electricity," Frank noted. "Do these calculations do any good for anybody?"

"Just the person who gets the new Bitcoin."

"So, basically, your computer gets a gold star for being good at some useless math problems, and you sell the gold star?"

"I haven't heard anyone phrase it that way, but sure, I guess."

"Huh. So this Zoom money, what can you buy with it?" he wondered.

"You can't really go to a store with it or anything. There was a pizza place in Shelburne that accepted crypto for a while in 2013, but not anymore. You just hope the value goes up."

"Except stock is for part of a company somewhere," I said. "So its value goes up and down with the company. Crypto is just what it is."

"Money that can't buy things? So who would you sell it to if you wanted real money again?"

"Someone else who wants Bitcoin."

"What if no one wants Bitcoin at the moment?" Frank asked.

"I guess the price goes down until someone wants it."

"Sounds like stock again, without the company," he observed. "Even betting on horses, there's an actual horse you can read up on. This is like betting on the horses, with no horses. Even Beanie Babies and pet rocks, you got a thing. I found a Beanie Baby at a garage sale; my granddaughter liked it. Twenty-five cents seemed kind of steep, but it was worth it for one smile. So I still don't understand, what do you get for your money?"

"That's where NFTs come in," I said. "They're tokens to prove you are the original owner of something like a picture of a bored ape."

"I guess it's something to brag about, to get people talking about you."

"Tell you what. If you paid even $500 for a picture that looked like that, I guarantee you that everybody in Vermont would be talking about you."

Frank thought for a bit. "So I guess with all this stuff," he continued, "people think it's valuable because the computer token makes it scarce, in a weird electronic way?"

"Well, I got a money that's even scarcer than that."

"How many are there?"

"There ain't any at all," Frank replied. "That's as scarce as you can get. It's gotta be worth billions."

"But there's nothing you can sell."

"That's OK, I'm doing fine," Frank said. "Tell you what, though. How about I make one of them, the world's only Frank Coin. I'll sell it to you for a million dollars. Just 'cause you're my friend."

Well, I don't have a million dollars, and Frank didn't have any more questions, which is usually a sign that he's thinking something over. This was a long silence, a full beer and a half of quiet. Then he said, "Sounds like what's going on is, you have a bunch of people who have so much money, they're bored of it. And they want to make it more interesting again, even if they might lose it all."

"Well, we have a good old-fashioned Vermont way to solve that problem," Frank said. "These folks just need to buy a farm."