A Fourth Generation Takes Over Lippa's Estate and Fine Jewelry 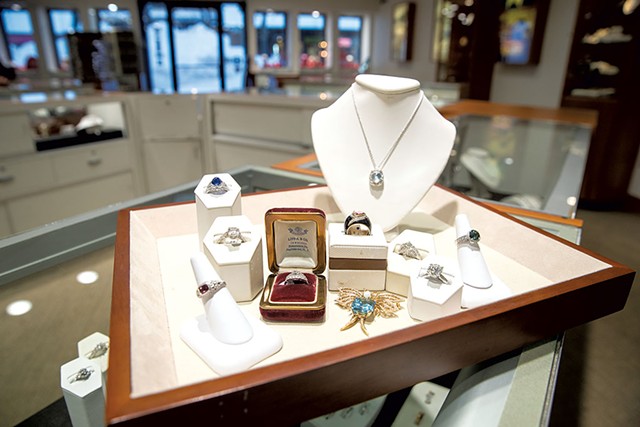 The first piece of jewelry Jeffrey Berger ever sold was a Timex watch. He was 10 years old, and it was Christmastime at his family's jewelry store. How does a 10-year-old sell a watch?

"With a smile," Berger said, flashing one. Now 71, he has a grin that seems to take up his whole face. He said it's because jewelry is a "happy business," something people buy to celebrate and give to people they love.

That first sale happened at the Plattsburgh, N.Y., location of Lippa's Estate and Fine Jewelry, which has been in Berger's family since 1933. It was founded in Burlington by Berger's grandfather, a peddler who traveled between Vermont and Rhode Island buying scrap gold and refining it for resale. (The Plattsburgh store where Berger first worked opened in 1946 and closed in 1980.)

Today, Berger said, Lippa's is the oldest family-owned jewelry store in Vermont. After 50 years in the business, Berger is retiring and passing the store to his son, Michael, 43. Representing the fourth generation of the family to run the shop, Michael has helped Lippa's make a transition to selling mostly vintage and estate jewelry.

"What I saw, what I handled, most of the industry doesn't see." Michael Berger tweet this

After Jeffrey's grandfather died, his parents ran the store until their son was old enough to take it over. But going into the family business was no foregone conclusion for Jeffrey.

"At one time, I thought it would be a great career to teach golf in the summer and teach skiing in the winter," he admitted. Ultimately, it was the skiing that brought him back to Lippa's.

After college, in 1971, Jeffrey worked at Lippa's Burlington location, then moved to New York to work for another jewelry store. There he lasted all of three days, he said. Driving back on a Friday afternoon in a nor'easter, he decided the commute to his favorite ski mountains was untenable.

Jeffrey called his father and said, "I'll be in on Monday."

Since then, Jeffrey has watched Church Street transform from a street with vehicle traffic into the pedestrian marketplace it is today, a shift that he said "brought downtown Burlington into the 20th century." His dad would watch the store for him when he went to trade shows. His mother — until her death a few years ago at age 98 — also stayed involved, occasionally asking to check up on the books.

Michael grew up in and out of Lippa's just as Jeffrey had. But he, too, had initial doubts about wanting to make the store his career. He went to the University of Denver and studied marketing. Eventually, though, a specific aspect of the jewelry business drew him back: selling vintage pieces.

"To be perfectly honest, I wasn't a fan of history in school," Michael said. But the stories behind the jewelry and the effort that went into preserving it fascinated him.

To buy and sell estate jewelry effectively, a gemologist — as trained gemstone experts like Michael are called — must have a deep working knowledge of what certain stones, types of craftsmanship and eras of jewelry are worth. He has to understand where and how pieces were made, and if he doesn't know, he has to know whom to call to find out.

Then there's the matter of repairing or improving jewelry. Recutting a stone — a process in which the gemologist serves as design director and collaborates with a skilled gem cutter — can increase its value.

Once certified as a gemologist at the Gemological Institute of America in Carlsbad, Calif., Michael went to work in San Francisco for a friend of his father's named Steve Silver. Under Silver's tutelage, he handled millions of dollars' worth of jewelry. In his first hiring test, Silver asked Michael to value a $200,000 sapphire necklace. Later, they oversaw the recutting of one of the largest red diamonds in the world.

"We can look at something that's been damaged and figure out what we can do to make it right," Michael explained. "Also, how to improve colored stones by changing the orientation of the stone, changing angles."

In one case, he and Silver recut a blue diamond in a way that changed its color intensity. Michael said they increased the value of that stone fourfold.

"It was jewelry like I had never seen before," he marveled. "What I saw, what I handled, most of the industry doesn't see."

Eventually, Michael felt he'd learned all he could with Silver and returned to Burlington. Or, in the joking words of his father: "Twelve years later, he finally shows up."

Jeffrey was supportive as Michael gave Lippa's a new focus on his estate jewelry passion. Both men say that the vintage jewelry business is booming and that the unique offerings at Lippa's keep it relevant in the internet age.

These days, Jeffrey pointed out, anyone can go on diamonds.com and buy an engagement ring, such as a popular halo style with a large diamond surrounded by smaller ones. While there's nothing wrong with those rings, "you see them on everybody's finger," he said.

He gestured to a store display of engagement rings from the 1930s and '40s with less standard shapes and arrangements of stones. "You don't see this all the time," Jeffrey said.

His point is that no one can duplicate Lippa's one-of-a-kind inventory. A customer who falls in love with a vintage ring there can't go and order the same one online.

The store is also home to a shelf full of Waterford crystal dishware and one of silver. One counter holds a fishbowl containing a 66-inch strand of freshwater pearls.

Michael said more and more people are buying vintage, in part because the craftsmanship seen in many older pieces would be cost-prohibitive to re-create today. Environmental and ethical considerations also factor in, he suggested.

"We get frequent questions about ethically sourced diamonds," Jeffrey said. "We take it very seriously."

He said he believes the jewelry industry has been proactive in addressing concerns about conflict and exploitation such as those raised in the 2006 movie Blood Diamond, which detailed the symbiotic relationship between warlords and diamond merchants in Sierra Leone. A small number of diamonds that hit the market aren't ethically mined or traded, Jeffrey conceded, but he trusts Lippa's long-term suppliers to be responsible.

He added that the focus on estate jewelry has allowed Lippa's to stand out in an increasingly crowded market — even though some other shops also offer estate and antique pieces. When he started in the biz, Jeffrey recalled, Chittenden County had four jewelry stores. Now, he counts about 20.

Michael said there's always something to learn as tastes and trends in jewelry evolve. For example, more women are eschewing large diamonds in their engagement rings, opting instead for colored stones as a centerpiece. He's also seen the emergence of "industrial-grade" diamonds — stones with natural deformities that are typically relegated to use as cutting implements rather than being made into jewelry. Customers are newly interested in these "salt-and-pepper" stones, which traditionally have been valued far less than clear diamonds.

"Basically, the rules have been thrown out," Michael said. He doesn't mind, because working with unique pieces is the most interesting part of his job. "To me, it's just a lot more fun."