A Mother Aims to Put Healing Art in Every Vermont Hospital 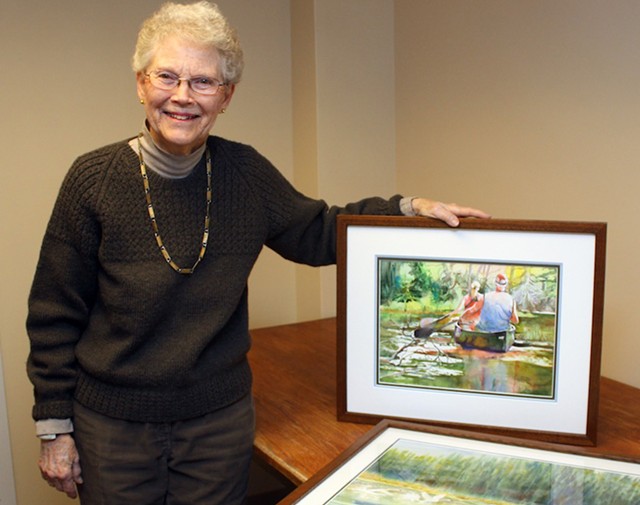 In 2009, as Susan Sebastian lay dying at Fletcher Allen Health Care in Burlington, she told her mother that if she survived her illness, she would sell her house and use the money to buy artwork for every patient room in the hospital. The view from Sebastian's bed, recalls her mother, Elise Braun of Waterbury, was drab and dismal; it overlooked a brick wall and heating vents. The only objects on the room's walls were medical devices and a TV set.

"She was well aware that there was lovely artwork throughout the hospital — for visitors," Braun says. "She longed for something decent to look at."

Sebastian, a 1975 graduate of Stowe High School, was a lifelong asthmatic with multiple health problems; she passed away April 17, 2009, at age 52. Braun decided to fulfill her daughter's final wish, and then some.

About a year later, Braun sold Sebastian's house in Massachusetts — Sebastian's husband, Jim, had predeceased her, and the couple had no children — and used the proceeds to set up the nonprofit Susan Sebastian Foundation. In its first year, the foundation purchased 47 works of art for Fletcher Allen (now the University of Vermont Medical Center) and had one installed in every in-patient room with available wall space.

Since then, the foundation has quietly continued pursuing Sebastian's dream. It has purchased artworks, almost exclusively by Vermont artists, for 13 of the state's 14 hospitals. Northwestern Medical Center in St. Albans received 37 pieces; 12 went to Grace Cottage Hospital in Townshend, and 38 to Porter Medical Center in Middlebury. In 2013, Gifford Medical Center in Randolph received 25 works for its 25-bed hospital, and North Country Hospital in Newport received 32.

Brattleboro Memorial Hospital, which received 27 artworks in 2014, was a particularly rewarding site for Braun, she says: Her daughter was born there. By coincidence, the hospital scheduled its art reception on Sebastian's birthday, July 31.

Neither Braun nor Gilbert Myers, a retired Burlington attorney who helped set up the foundation and now manages it, knows the total number of pieces they've bought so far.

His guess probably isn't far off the mark. At last count, Vermont had 1,200 in-patient beds, according to data from the American Hospital Association. Braun points out that some hospitals, such as Copley Hospital in Morrisville, already had artwork in patients' rooms. In such cases, the foundation donated pictures to decorate the emergency room instead.

Most recently, in July 2015, the foundation gifted 38 works to the Central Vermont Medical Center in Berlin. According to a hospital press release, that portfolio was valued at about $20,000. It features photographs, pastels, oils on paper, prints and watercolors by such celebrated Vermont artists as Kathleen Kolb, Daryl Storrs, Sabra Field, Ed Epstein, Woody Jackson, Harald Aksdal, Jeneane Lunn, Annelein Beukenkamp, Frank Woods, John Snell and Rory Jackson, among others.

"I think we've got a Harald Aksdal in every hospital in Vermont," says Myers of the Fairfax artist.

Almost every hospital. Up next is Southwestern Vermont Health Care in Bennington. The last hospital in Vermont to benefit from the foundation's largesse, SVHC recently put out a call for artists to decorate its in-patient rooms — 54 in all, according to director of communications and marketing Ray Smith.

For that project, SVHC has partnered with the Southern Vermont Arts Center in Manchester to create a juried exhibit of more than 100 pieces. Titled "The Healing Power of Art," the exhibit will open June 11 at SVAC. A five-member committee will select more than 50 works from that show to adorn patients' rooms; the remaining works will be offered for sale to the public. As Smith explains, all submissions must be able to be framed and concealed behind museum glass, both to eliminate glare for the patients and to permit regular cleaning and disinfecting.

Braun helped choose many of the artworks purchased over the last six years, until her cancer diagnosis last summer made the work untenable. Initially, she admits, the selection process was daunting.

"Susie had a lot of artist friends in Massachusetts. She absolutely adored art," Braun says. "But I was a little unsure of myself. I didn't know if it was going to work or if I was headed in the right direction."

Braun eventually found guidance in a book called Healing Spaces: The Science of Place and Well-Being, by Dr. Esther M. Sternberg. A rheumatologist, medical researcher and director of the University of Arizona Institute on Place and Wellbeing, Sternberg was a pioneer in studying the relationship between physical environments and health.

The physician discovered firsthand the healing properties of beautiful landscapes after developing stress-induced inflammatory arthritis shortly after her mother's death. A neighbor offered Sternberg a stay at his vacation home in Greece. There she recovered quickly and soon grew fascinated by the question: Can an appealing environment, either outside the window or inside on the walls, help people heal faster and improve their general health?

According to Sternberg's research, it can and does. During a TEDx talk she delivered in Tucson, Ariz., in 2013, she cited a 1984 study of patients recovering from gallbladder surgery. Those who had a view of trees outside their windows healed an average of one day sooner, required less pain medication and had fewer negative nurses' notes than did patients who had views of a brick wall.

Sternberg will elaborate on her research at a talk scheduled for the June 11 opening at SVAC, says SVHC's Smith. In the meantime, Braun can rest assured that she's given Vermont's patients views that her daughter would have appreciated.

The original print version of this article was headlined "A Mother's Goal: Artwork in Every Patient Room in Vermont"