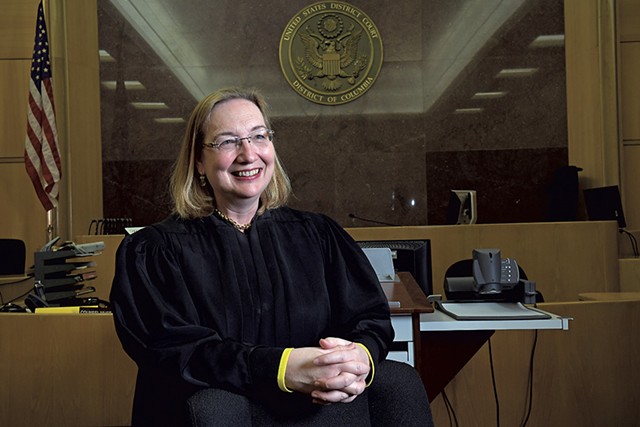 Overseeing the most important legal proceeding in America — the grand jury probe of President Donald Trump's Russian connections — is a little-known federal judge with ties to Vermont who spent a decade advising Sen. Patrick Leahy (D-Vt.). Though Trump hasn't tweeted about her yet, Judge Beryl Howell could shape the future of his presidency.

According to friends and former colleagues, she's just the woman for the job.

"She's a straight shooter," said former Leahy chief of staff Ed Pagano, who worked alongside Howell on the U.S. Senate Judiciary Committee. "I can't think of anyone who would be fairer than her on the bench."

Two months after his appointment last May as special counsel, Robert Mueller impaneled a grand jury in Washington, D.C., to investigate alleged Russian meddling in the 2016 election and potential obstruction of justice by the president. As chief judge of D.C.'s federal district court, it fell to Howell to referee the process. (Other aspects of the Trump probe, including a grand jury Mueller has used in Virginia and a New York-based investigation of the president's lawyer, Michael Cohen, fall outside of her jurisdiction.)

Federal prosecutors typically use grand juries to gather evidence in an investigation, by compelling witnesses to testify, and then seek indictments. But because grand juries operate in secret, not much is known about Howell's exact role in the Mueller probe. Only a handful of news stories have mentioned her by name, and some friends said they had no idea she was involved.

There are some clues about Howell's influence over the matter. In a 37-page opinion issued last October and unsealed weeks later, Howell ruled that a lawyer for former Trump campaign chair Paul Manafort and his deputy, Rick Gates, could be forced to appear before the grand jury.

"When a person uses the attorney-client relationship to further a criminal scheme, the law is well established that a claim of attorney-client or work-product privilege must yield to the grand jury's investigatory needs," Howell wrote.

Though the 61-year-old judge has lived in D.C. and New York City for most of her career, she has spent considerable time in Vermont since at least the mid-1990s. She and her husband, Michael Rosenfeld, own a vacation home in Leicester, where she has been involved in the Lake Dunmore/Fern Lake Association. Rosenfeld, a documentary filmmaker and producer, serves on the Vermont College of Fine Arts' board of trustees.

Hinesburg writer Bill Schubart, who chairs the VCFA board, has spent time with Howell, Rosenfeld and their three children during their trips to Vermont over the past two decades.

Born on a U.S. Army base in Georgia, Howell grew up in a military family that frequently relocated, according to longtime friend Beth Wilkinson, a D.C. trial lawyer. Howell graduated from Columbia Law School in 1983 and, four years later, landed a career-defining job at the U.S. Attorney's Office for the Eastern District of New York.

EDNY was stocked at the time with legal standouts, including future attorney general Loretta Lynch, future Department of Justice criminal chief Leslie Caldwell and a future prosecutor in Mueller's Office of the Special Counsel, Andrew Weissmann.

"She was incredibly talented," Wilkinson said of Howell, with whom she worked in the Brooklyn office. "We all looked up to her."

As deputy chief of the Narcotics Section, Howell led the prosecution of Colombia's Cali Cartel and a violent Chinatown gang known as the Flying Dragons. According to Wilkinson, Howell was pregnant when she took the latter case to trial and, upon delivering her closing statement, went straight to the hospital to give birth.

Leahy, a former county prosecutor, marveled at her record years later during her judicial confirmation hearings. "Descriptions of her cases read like crime novels," he said in 2010.

In 1993, Howell went to work for the Vermont senator, advising him at first on technology and antitrust issues — and later, as general counsel on his Judiciary Committee staff, on the impeachment of president Bill Clinton and passage of the USA PATRIOT Act.

"It is hard to think of anything that she hasn't been involved in," Leahy said in a 2003 committee meeting as Howell was preparing to leave the Senate.

Leahy and many of Howell's former colleagues declined to comment for this story, as did the judge herself. Some expressed the fear that, as a former Leahy aide, she could be targeted for abuse by Trump, who has incorrectly asserted that his legal adversaries are all Democrats.

Howell actually is. According to D.C. municipal records, she is registered to vote as a Democrat.

While Howell has mostly been spared allegations of partisanship, the conservative advocacy group Americans for Limited Government did call for her recusal last summer because of her relationships with Weissmann and Lynch. "The president of the United States deserves better than a kangaroo court," ALG president Rick Manning said at the time.

But Pagano, a Howell defender, argued that, despite her ties to Leahy, "She's not a political person, really." Even Leahy's Republican counterpart on the Judiciary Committee at the time, Sen. Orrin Hatch (R-Utah), sang her praises at the 2003 committee meeting.

"Now, I have to say that her tenure has been marked by a zealous advocacy on her part that has really worked me over from time to time," Hatch said. "But she has done a good job, and I admire her admirable tenacity in moving her positions and Sen. Leahy's, and mine, too, forward."

Though Howell left the Vermont senator's employ a decade and a half ago, she remains a member of the so-called "Leahy diaspora." When the senator recommended Burlington lawyer Eric Miller to serve as U.S. attorney for Vermont in 2015, Judiciary Committee staffers suggested that the nominee call Howell for advice.

"The judge was very helpful to me as I prepared to go through the nomination and confirmation process," Miller said.

Last October, state Sen. Phil Baruth (D/P-Chittenden) read from his recently released biography, Senator Leahy: A Life in Scenes, at a D.C. bookstore. He had interviewed Howell over the phone for the book but didn't immediately recognize her when she took a seat in the front row. "I didn't know who it was, but there was some deference being paid to her," Baruth recalled.

After leaving Leahy's office in 2003, Howell worked for a cybersecurity firm, lobbied for the Recording Industry Association of America and served on the U.S. Sentencing Commission. Then-president Barack Obama appointed her to the federal bench in 2010, and she became chief judge within seven years, following the resignation of her predecessor over allegations of sexual misconduct.

A longtime proponent of the Freedom of Information Act, Howell has repeatedly ruled against those who have sought to withhold public records, including the Obama White House, Hillary Clinton's State Department and the Federal Emergency Management Agency. She drew notice this month when she ordered the release of previously sealed records from independent counsel Ken Starr's investigation of Bill Clinton — setting a precedent that might one day be applied to the Mueller probe.

While Howell has mostly remained under the radar, Washington Post columnist David Ignatius posited a scenario earlier this month that might change that. If Trump were to order Mueller's removal, as he has reportedly considered, Howell would have the authority to appoint a new special counsel to complete the investigation, the columnist argued.

Though such an outcome may sound far-fetched, Ignatius noted that a predecessor of Howell's, chief judge John Sirica, sought to do the same after president Richard Nixon fired the Watergate special prosecutor, Archibald Cox.